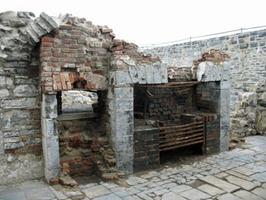 Remains of the kitchen bread oven (left) and hearth (right). The limestone paving in front of the oven and the hearth date back to the French regime (courtesy Parks Canada)

A few rooms from the Saint-Louis Château's basement under the rule of Governor Vaudreuil (1723) : vegetable cold room (upper left) and pantry (lower right). The sandstone paving was built during the English regime (around 1817) (courtesy Parks Canada). 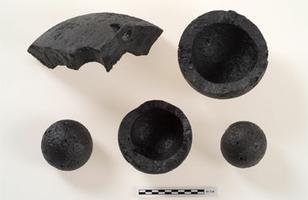 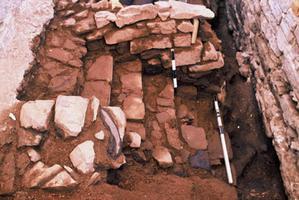 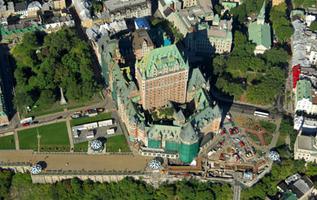 In 2005, Parks Canada undertook important works aimed at renewing or stabilizing structural elements from the north part of the terrace. Since it had long been known that the remains of the Saint-Louis château were located under this section of the terrace, Parks Canada could not have asked for a better opportunity to carry out a large-scale archaeological excavation program. The excavations lasted three years, from 2005 to 2007, and were carried out by a team of about 30 individuals. The archaeological site was opened to the public during the summers of 2008, 2009 and 2010, and attracted more than 500 000 visitors.

Throughout this ambitious excavation program, no fewer than 500 architectural remains were unearthed and about 500 000 artifacts were collected.

Remains of the Four Saint-Louis Forts

Remains of defence works associated with the four Saint-Louis Forts have been discovered, including the first fort, built by Champlain in 1620; the second fort, which was also built by the founder of Québec in 1626; the third fort, constructed by Champlain's successors between 1636 and 1690; and, finally, the fort erected by Governor Frontenac in the early 1690s. This last fort was nearly four times bigger than the preceding ones.

Among the remains associated with the four forts, archaeologists unearthed a small masonry defence work, known as a "spur," associated with the first fort; a stone stairway (unique in Québec) and a wooden cannon platform from the second fort; and a redoubt and a few sections of the stone walls belonging to the third and fourth forts. Remains of the four cannon platforms from the 1691 château's battery were also discovered. Furthermore, some works still bear marks from the 1759 bombing, and many artillery projectiles have been collected at the site.

Governor Charles Huault de Montmagny built the first Saint-Louis château in 1647-48. It was a stone building with only one storey. The second château was erected by Frontenac in 1694, but it was not completed until 1723, under Governor Vaudreuil. This new building had two floors. It was severely damaged by the 1759 bombing and was repaired by the British in the mid-1760s. In the early 19th century (1808-1811), Governor James Craig enlarged the building and added a third storey. In January 1834, the building was engulfed in flames and was never rebuilt.

A large amount of remains from the two Saint-Louis châteaux are found at the site. The first château was completely destroyed except for the foundations, which were incorporated into the new building erected by Frontenac. All of the basement rooms of this last residence have been unearthed. Remains of the two latrine wings, located at the north and southwest extremities of the château, were also cleared out, including three latrine pits that enclosed numerous artifacts revealing how daily life was for the British and French governors.

Several of the basement rooms, such as the vegetable cold room, the kitchen, the laundry room, the servants' hall and the pantry, are connected to the château's culinary complex. The imposing remains of a bread oven and a hearth were unearthed in the kitchen. Some of the culinary complex's walls are preserved up to a height of nearly three metres, and the bases of the archways, which separate the château's basement from the ground floor, can still be seen.

The expansion works undertaken at the château between 1808 and 1811 also left numerous archaeological traces: foundations of a staircase, foundations of a large lobby and of two passageways for the servants.

Limestone paving and wooden floors from the French regime, as well as sandstone paving from the English regime were also found in all of the building's basement rooms.

In addition, the remains of several of the château's secondary buildings or outbuildings were also discovered in the west and south yards. Among those figure a bakery, a covered passageway, a laundry room and an outdoor kitchen, a woodshed, a coal storage shed, a stable, a coach house and an ice house.

The Presentation of the Site

During winter 2010-2011, Parks Canada built an archaeological crypt under the new structure of the Dufferin Terrace in order to protect the architectural remains from weather conditions and to allow people to visit this exceptional archaeological site, which was for more than 200 years the colony's administrative centre.