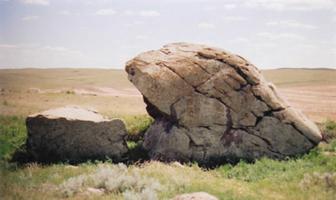 Standing rock at the Hazlet Petroglyph Site (EcEo-1). This conspicuous landmark on a main trail known since the 1850s contains 2 red handprints beneath the overhang (courtesy Jack Steinbring). 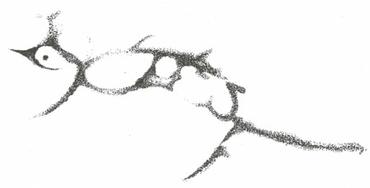 A stylized quadruped in black painted onto the northwest facet of the Swift Current Monolith (courtesy Jack Steinbring; drawing by Monica Rollick). 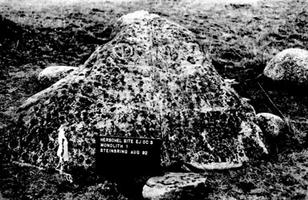 Monolith No. 1 at the Herschel Petroglyph Site. The view is to the west. Hundreds of cupules (carved pits) decorate this face of the monolith (courtesy Jack Steinbring). 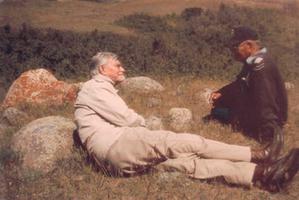 The cobbles lying in the foreground formed a pavement somehow related to the rituals performed at the location of the engravings (courtesy Jack Steinbring). 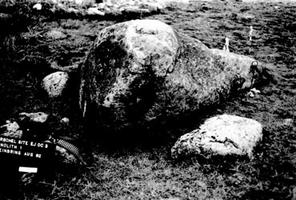 View of the northeast showing the general configuration of Monolith No. 1 at the Herschel Petroglyph site. This view closely resembles a reclining bison. In fact, there is a carving around the crown which may have been intended to represent horns (courtesy Jack Steinbring). 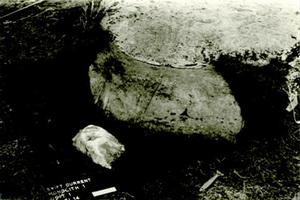 Excavations at the southwest facet of the Swift Current Monolith. A \u0093starbust\u0094 image in black pigment lies well below the soil line. To the left of it may be seen the tail of a black rock painting representing a stylized quadruped (courtesy Jack Steinbring). 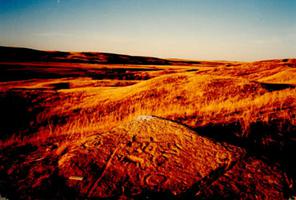 View to the north along the valley of Swift Current Creek (courtesy Jack Steinbring). 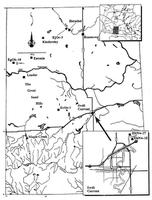 Two significant Aboriginal rock art sites in southwestern Saskatchewan were excavated during the early 1990s. These were the Herschel Petroglyph Site 95 km southwest of Saskatoon, and the Swift Current Creek Site just north of Canada No. 1 highway as it passes the city of Swift Current. The principal investigators for these excavations were Dr. Jack Steinbring and Dr. A.P. Buchner from the University of Winnipeg. The project was sponsored by the Province of Saskatchewan.

The Herschel site (Borden No. EjOc-3) lies on the high ground overlooking Eagle Creek, a tributary of the North Saskatchewan River. It consists of three carved monoliths, some tipi rings and a long line of boulders extending north down into a broad valley. The main monolith is a large glacial erratic of dolomite with hundreds of cupules (pits) carved into a flat panel facing east. Test examinations in the soil at the base of the monolith showed that cupules continued down well below the soil surface. Several artifacts related to the monolith were recovered. It appears that finely chipped bison bones, stone flakes, red ochre, and a few shards of prehistoric pottery were distributed at the base of the monolith as some form of ritual offering. Among the excavated objects was a small tin lid with a vague image engraved on it. There were also a few overshoe buckles, indicating that the monolith had been venerated into historic times, probably as late as the 1890s.

The ceramics recovered during the excavations, and in association with the chipped bison bones, were identified as diagnostic for the Avonlea Culture, a bison-hunting group which flourished from 1750 to 1150 BP (before present, an archaeological time scale that begins at 1950). This, however, does not necessarily date the entire history of the monolith. The rock art is thought by some leading authorities to belong to the Pit and Groove Style in North American rock art which commonly dated to ca 9000-10 000 BP. This style is often regarded as the earliest example of Aboriginal marking in North America. Thus it may be that later populations came to venerate an ancient site with offerings reflecting a later time period.

The Swift Current Site (Borden No. EbNw-15) consists of a large limestone monolith with many engravings on the top face. It stands out on a small promontory overlooking Swift Current Creek in a valley to the west. The engravings consist of a long meandering line, hoof prints, cupules, and a very deeply pecked naturalistic bison. Since the monolith is almost horizontally positioned, the depression created by the bison image could have held ritual fluids.

Excavations again yielded evidence of the Avonlea Culture. A small lens in the strata at the west face yielded flakes, red pigment, a small pecking hammer, and some charcoal. A radiocarbon date from the charcoal yielded a date of 1262 ± 95 BP. This, along with the presence of Avonlea style pottery, showed clearly that this culture had used the engraved monolith.

An unusual discovery at the Swift Current Site came in the form of black rock paintings around at least two sides of the monolith. These paintings consisted of a star burst and an animal figure with a long tail on the north side of the boulder. This is unprecedented in Canadian rock art research. All of the figures were beneath the soil mantle, and of prehistoric origin. Again, it is not possible to assign an initial date to the engravings on the top of the monolith. Typologically some of them conform to earlier dates established elsewhere, especially the naturalistic bison which has counterparts known to be of the Archaic Tradition, over 5000 years old. While we know that the monolith was again venerated by the Avonlea people, it may have been rediscovered by them long after the engravings had been initiated by earlier cultures.

Other Sites in Southwestern Saskatchewan

A richly engraved petroglyph site near Weyburn in Southeastern Saskatchewan has attracted the attention of rock art researchers. Known as the St. Victor Site, it has some of the symbols present at Swift Current, but many others as well. No formal excavations were undertaken there, and vandalism had caused the Saskatchewan Government to erect a replica some distance from the actual engravings so that cloth rubbings would be made on it rather than on the originals. A boardwalk was also installed to prevent visitors from walking on the engravings.

A huge erratic west of the Herschel Site near the town of Hazlet contains some handprints in red pigment. This monolith lies on a major aboriginal and early historic trail suggesting that the paintings have something to do with travel. Other than simple observation, no scientific work has been done on the site.

There remains of one other engraving site were located, again an isolated boulder on a prominence overlooking Cabri Lake, southwest of the Herschel Site. Some test excavations were done here, but no archaeological remains were encountered. The markings are not like those of Herschel and Swift Current.

The research into prehistoric rock art in southwestern Saskatchewan has revealed a wealth of artistic activity by ancient Indigenous populations. All of the sites are threatened by both natural forces and human interaction. Weathering on the rather soft rock on which the engravings and paintings occur will eventually destroy them. The potential for vandalism is common to them all, and very little effort has been expended to prevent this.

The sites are all unique and irreplaceable. Their presence in the region holds the chance that some, especially Herschel, belong to the most ancient of all artistic traditions in North America. This tradition, represented by the Pit and Groove Style, may in fact be the earliest human marking in the Western Hemisphere and may relate to North America's first immigrants over 18 000 years ago.