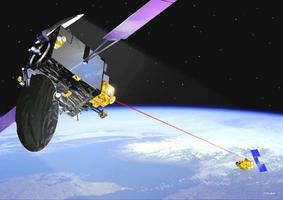 Placed on a geostationary orbit at 36 000 kilometres above the Earth, Artemis is ESA's most advanced sophisticated communications satellite (courtesy Canadian Space Agency).
PreviousNext

In 1945 Arthur C. Clarke proposed that a man-made Earth SATELLITE could be used for communication by radio microwaves between distant locations on Earth. The satellite would be positioned in space at an altitude of about 35 790 km so that its speed of revolution around the Earth would be the same as the speed of the Earth's rotation. This synchronous satellite would always appear in the same place in the sky. It would be in geostationary orbit.

Characteristics
A typical satellite consists of a number of repeaters (transponders), each of which provides a large-capacity communication channel. Each transponder has a receiver tuned to a frequency range that has been allocated for uplink communication signals from Earth to the satellite. Following the receiver, each transponder consists of a frequency shifter to lower the received signals to a downlink frequency, a filter tuned to the frequency of the transponder and a power amplifier to transmit signals back to Earth.

The communication capacity of a satellite is determined by the number of transponder channels and the volume of communication that can be transmitted on each channel. Although this varies from one type of satellite to another, the most commonly used satellite in 1995 had 24 transponders. Each can carry a colour TV signal (or 6 digitally compressed TV signals) or at least 1200 telephone voice signals in one direction. Each new generation of satellites tends to have increased communication capability.

The transmitting and receiving stations on Earth (earth stations) range in size from sophisticated, expensive stations that send and receive all types of communication signals to relatively simple and less costly stations (dish-shaped TV antennas) used only to receive television signals. The size and cost of Earth stations depend upon the power built into the satellite, as well as the frequencies used. The stronger the signal from the satellite, the smaller and less costly the receiving station. Direct Broadcast Satellites are designed specifically to minimize size and cost.

Satellites have significant advantages over other modes of transmission such as cable and land-line microwave for certain kinds of communication. The cost of transmission is independent of geographical terrain or distance, as long as both sender and receiver are within line of sight of the satellite (about one-third of the Earth's surface). Communication links can be extended to remote areas that could not otherwise be reached.

Satellites are less costly for transmission over extremely long distances - especially for relatively small volumes of communication. A communication signal can be sent to any number of reception points simultaneously, making satellites ideal for television and other forms of point-to-multipoint communication. Satellites are also extremely flexible because the sending and receiving points can be changed on short notice to meet changes in demand.

Satellites are used for voice communication. They do introduce a greater delay than land-line transmission systems because of the delay (almost 0.3 second) required for the signal to travel to the satellite and return to Earth. Echoes of a speaker's voice are heard 0.6 second after speaking. Echo suppressors successfully cancel echoes of a speaker's voice which would otherwise by heard 0.6 second after speaking.

The earliest satellite communication experiments were sponsored by the US government. Under project SCORE (Signal Communication by Orbiting Relay Equipment), the first communication satellite was launched by the National Aeronautics and Space Administration on 18 December 1958 and worked for 13 days. Echo 1, launched 12 August 1960, was a passive satellite that simply reflected signals sent from ground transmitters back to Earth.

Telstar, launched 10 July 1962, was the first active satellite with a microwave receiver and transmitter. The first synchronous satellite, Syncom 1, was launched on 14 February 1963; it failed after a few days and was followed by a more successful version, Syncom 2, on July 26. During this period, the USSR also began a program of satellite experimentation, soon followed by Canada.

On 29 September 1962 Canada's first satellite was launched into orbit by NASA, making Canada the third nation in space. Alouette 1 was designed and built by the Defence Research and Telecommunications Establishment (now part of the Canadian Space Agency), and was used for scientific experiments in the ionosphere.

From 1963 to 1969 Canada participated in a joint experimental program with the US called ISIS (International Satellites for Ionospheric Studies). A major objective of this program was to transfer the skills and knowledge developed by government scientists and technicians in the early phase of space communication activity to private industry. RCA Victor, DE HAVILLAND AIRCRAFT and Spar Aerospace Ltd were the major companies participating (see SPACE TECHNOLOGY).

By 1967 the prime Canadian objective of the satellite program had shifted from scientific experimentation to applications, with emphasis on domestic TELECOMMUNICATIONS and the monitoring of natural resources. In 1969 Parliament created Telesat Canada Corp to operate a domestic commercial satellite system. Anik A-1 was launched in November 1972, followed by Anik A-2 in April 1973, when Canada became the first country to employ satellites for domestic COMMUNICATIONS. A third satellite, Anik A-3, was launched in May 1975.

The Anik A system used satellites originally developed in the US for the Intelsat IV program. Two Canadian companies, Spar Aerospace and Northern Telecom, were subcontractors. Each satellite had 12 transponder channels in the 6/4 GHz band. Over 100 earth stations were installed across Canada.

An experimental communication satellite system, the Communications Technology Satellite, renamed Hermes, was developed parallel to the commercial system. The main objective was the opening up of the higher radio frequency 14/12 GHz band that had been allocated for the exclusive use of space communication services. However, the higher frequencies required new technical systems and components, and higher satellite power levels to compensate for the expected increase in signal attenuation, caused primarily by rainfall.

The development of new components and the increased weight made necessary by higher power levels meant that major expenditures would have to be incurred on an unproven satellite. Since private firms were unwilling to take these risks, the federal government undertook the project.

The Hermes program (1970-79) was a Canada-US collaborative effort: the Department of Communications was responsible for the design, construction and operation of the spacecraft; NASA provided the launching and other specialized space facilities, and developed a high-power transmitting tube. Use of the satellite was shared equally. The European Space Research Organization joined the program in 1972.

Hermes was launched on 17 January 1976, the most powerful communications satellite at that time and the first to operate in the 14/12 GHz band. The exclusive use of the frequency band and the higher power of the transponders made possible the use of parabolic (dish) antennas as small as 0.6 m in diameter, especially suited for direct broadcasting of television signals to homes. The Hermes program also included experiments in tele-health, tele-education, community communications, delivery of administrative services, and scientific applications.

In addition to experiments conducted over Canada and the US, Hermes was used to demonstrate direct broadcasting in Peru, Australia and Papua New Guinea. The latter 2 demonstrations were conducted after moving the satellite to a different orbital position over the Pacific. New components developed in government laboratories, such as Field Effect Transistor amplifiers, were subsequently transferred to private industry and are now commonplace in commercial satellites. Major Canadian contractors for Hermes included Spar Aerospace, RCA Ltd and SED Systems.

NASA launched Anik B for Telesat Canada in December 1978. It had 12 commercial radio frequency channels in the 6/4 GHz band and 4 experimental channels in the 14/12 GHz band. The experimental channels were leased to the Department of Communications for field trials continuing from the Hermes program. Anik C-3 was placed in orbit in November 1982 by the US space shuttle Columbia. It has 16 channels, operates in the 14/12 GHz band and represents a major step toward direct satellite broadcasting to small, rooftop receiving antenna dishes. A second satellite in the same series, Anik C-2, was launched in June 1983 and a third, Anik C-3, was launched in April 1985.

These new satellites will operate with 4 regional beams across Canada, producing television signals of sufficient strength that they can be received on smaller (1.2-1.8 m) rooftop receiving dishes. A fourth generation of satellites was then planned. Anik D-1 was launched on 26 August 1982, replacing the aging Anik A and B satellites. Anik D-2 was placed in orbit by the US space shuttle Discovery in November 1984. The next series of commercial communications satellites were the Anik Es. Anik E-2 was launched in April 1991 and Anik E-1 was launched in September 1991. The Anik E satellites are a high power dual band design with 24 channels in the 6/4 GHz band and 16 channels in the 14/12 GHz band. The Anik Es were deployed to replace both the Anik C and Anik D satellites.

With the completion of the Hermes program, government development activity has focused on the Remote Manipulator System or the CANADARM for use in the American Space Shuttle Program. The armlike device was designed to deploy and retrieve objects in space and would be carried in the US space shuttle cargo bay. The Canadian government funded the development of the SRMS by an industrial team led by Spar Aerospace Ltd. In return, NASA agreed to procure production systems for the shuttle fleet from Canada. The Canadarm was successfully tested for the first time in 1981 on the US space shuttle Columbia.

Satellites are increasingly being used for mobile communications. This is made difficult because of the problem of placing satellite microwave antennas on moving vehicles. The first commercial mobile satellite service was to ships at sea. The Marisat system was established in 1976, and the International Maritime Satellite Organization (INMARSAT) in 1979.

Canada, with several other countries including the US, France and Russia, participates in the COSPAS-SARSAT program, a search and rescue tracking system which uses satellite technology for locating aircraft and ships in distress.

MSAT, a new mobile communications satellite, was scheduled for launch in late 1995. This satellite, a twin of the one launched by the US in April 1995, is the most technologically advanced and most powerful ever built for commercial mobile communications. Built by Hughes and Spar for TMI Communications, one of the most critical features of the satellite is the fact that it will introduce mobile communications to areas, including remote rural locations in which this service has never before been available. Applications include mobile radio telephone and data service, aeronautical and maritime services, safety and distress services, position locationing and wide area paging.

The successful launch in the early 1990s of Telesat's latest satellites, Anik E-1 and E-2, has ushered in a new era for Canadian satellite telecommunications. With these high-powered satellites, Canadians has gained access to the hundred television channel universe through direct-to-home satellite services. In addition, through the use of new satellite technologies (such as various digital compression techniques) Canadian consumers will have at their disposal a wide array of new business, information and entertainment services.

For the future, satellite telecommunications will continue to reduce geographic distances and barriers. Satellites will also continue to play a leading role as domestic industries and economies move towards global markets.