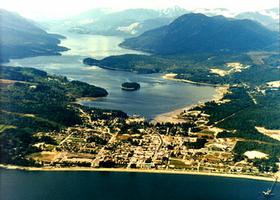 The Sechelt Peninsula, approximately 350 km2, is part of a popular cottage area and yachting centre in British Columbia known as the "Sunshine Coast." Isolated from nearby Vancouver, BC, by Howe Sound and the Coast Mountains, its coast is linked by ferries with Vancouver via Horseshoe Bay and with Powell River via Saltery Bay.

The name, meaning "place of shelter from the sea," identifies a Northern Georgia Strait Coast Salish group whose traditional territory includes Jervis and Sechelt inlets and connected waterways and nearby islands in the Strait of Georgia. In 1987 the Sechelt band became the first self-governing Indigenous nation in Canada, with jurisdiction similar to a municipal government.

Settlement of the peninsula by Europeans began in 1870. Logging began near tidewater in the late 19th century, and progressed into the mountainous centre of the peninsula after World War II. Clearcutting was halted in 1991 following severe flooding that damaged salmon hatcheries. The stump of a yellow cypress tree felled in the Caren Range was found to be 1820 years old - the oldest known tree in Canada.