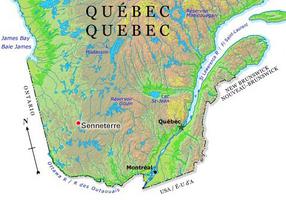 Senneterre, Qué, Town, pop 2993 (2006c), 3275 (2001c), inc 1956. Senneterre is located 130 km east of ROUYN-NORANDA along the banks of the Rivière Bell in Québec's Abitibi-Témiscamingue region. It was founded around 1914 with the arrival of the Transcontinental Railway. At that time, it was called Nottaway, after the river that flowed alongside the railway, one of the largest rivers in the region. Senneterre became a township municipality in 1919 and a town in 1956. Located in the eastern part of the Abitibi-Témiscamingue region, it has grown because of its sawmills and Canadian National Railway station. The town took its name from Henri de Senneterre, duc de la Ferté, a commander in Joseph de Montcalm's army.