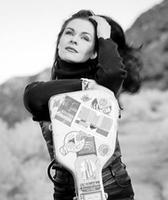 The music is an excerpt from Fauré's Elégie for cello and orchestra performed by Shauna Rolston and the Edmonton Symphony Orchestra, conducted by Uri Mayer (photo by Taffi Rosen).

Recognized for her brilliant technique and onstage intensity, Shauna Rolston has a wide-ranging repertoire. A champion of contemporary music, she has given numerous premieres of works by contemporary composers, many written especially for her. A noted recording artist, Rolston received critical accolades for her recording of Elgar and Saint Saens concerti on CBC Records. She has also committed to disc works by Faure, Dvorak, Franck, Tchaikovsky, Bruch, Glazunov, Debussy, Strauss, Barber, Messiaen, Lutoslawski, MORAWETZ, Bliss and others. Her most recent CD, This Is the Colour of My Dreams, is dedicated to pieces for cello and orchestra written for her by Heather Schmidt, Christos Hatzis, CHAN Ka Nin and Kelly-Marie Murphy.

In addition to a busy concert schedule, Rolston is much in demand as a guest master class instructor. She is professor of cello at the University of Toronto and a visiting artist at the BANFF CENTRE.