Sidney Crosby grew up in Cole Harbour, Nova Scotia, near Halifax. He is one of two children of Troy and Trina Crosby. Growing up, Crosby loved the Montreal Canadiens (his father was drafted by them in 1984) and his favourite player was Steve Yzerman. He spent countless hours shooting pucks into the family clothes dryer which is now covered with puck marks and is on display at the Nova Scotia Sports Hall of Fame. Crosby learned to skate by age three and conducted his first interview at age seven. His hard work and demanding physical training have contributed to his success as a hockey player.

Crosby was a hockey sensation from a young age. In 2001–02, he played AAA minor hockey with the Dartmouth Subways of the Nova Scotia Major Midget Hockey League. In 74 games he scored 193 points and still holds the franchise records for goals, assists and points. The following season he played for Shattuck-St. Mary’s, a highly regarded hockey prep school in Faribault, Minnesota, that has produced NHL players such as Jonathan Toews and Nathan Mackinnon, the latter of whom is also from Cole Harbour. At the end of the season, he was drafted into the Quebec Major Junior Hockey League (QMJHL) by the Rimouski Océanic.

As a junior hockey player, Crosby continued to be a standout. In two seasons (2003–05) with Rimouski Océanic, Crosby compiled 303 points, led the league in scoring both years and was twice named the Canadian Hockey League (CHL) player of the year. He led his team to the Memorial Cup final in 2005, but the team fell 4–0 to the London Knights.

Crosby was the first pick overall in the 2005 NHL entry draft and quickly established himself as an NHL star by scoring 39 goals and 102 points with the Pittsburgh Penguins, to finish sixth in league scoring in the 2005–06 season. He was the youngest player ever to score 100 career points (18 years, 253 days), and the youngest to score 200 career points (19 years, 207 days) —140 days younger than Wayne Gretzky(19 years, 347 days). Crosby, however, was edged out for rookie of the year honours (Calder Trophy) by another rising star, Alexander Ovechkin of the Washington Capitals. The two players formed an intense rivalry during their early years in the NHL.

Wearing his distinctive number 87 (his birth date is 8/7/87), Crosby became the youngest captain to lead a team to the Stanley Cup when Pittsburgh defeated the Detroit Red Wings in Game 7 of the 2008–09 Cup finals.

In January 2011, Crosby sustained a serious concussion after absorbing two hard hits to the head. The injury left him debilitated and he did not return to the ice until 21 November, when he scored two goals and two assists in a game versus the New York Islanders. Three weeks later, however, concussion symptoms returned and Crosby did not play again until 15 March 2012. In total, he missed more than 100 games in 2011 and 2012. When asked if he ever thought he might not play NHL hockey again, Crosby told Peter Mansbridge of CBC, “I’d be lying if I didn’t say that I thought about it.”

Crosby’s bad luck continued on 30 March 2013, when a teammate’s slap shot deflected off a stick and struck him in the face. The mishap broke Crosby’s jaw and damaged 10 teeth, and surgeons had to use screws and titanium plates to help the bone heal. The injury forced Crosby to miss the final 12 games of the regular season and one playoff game. 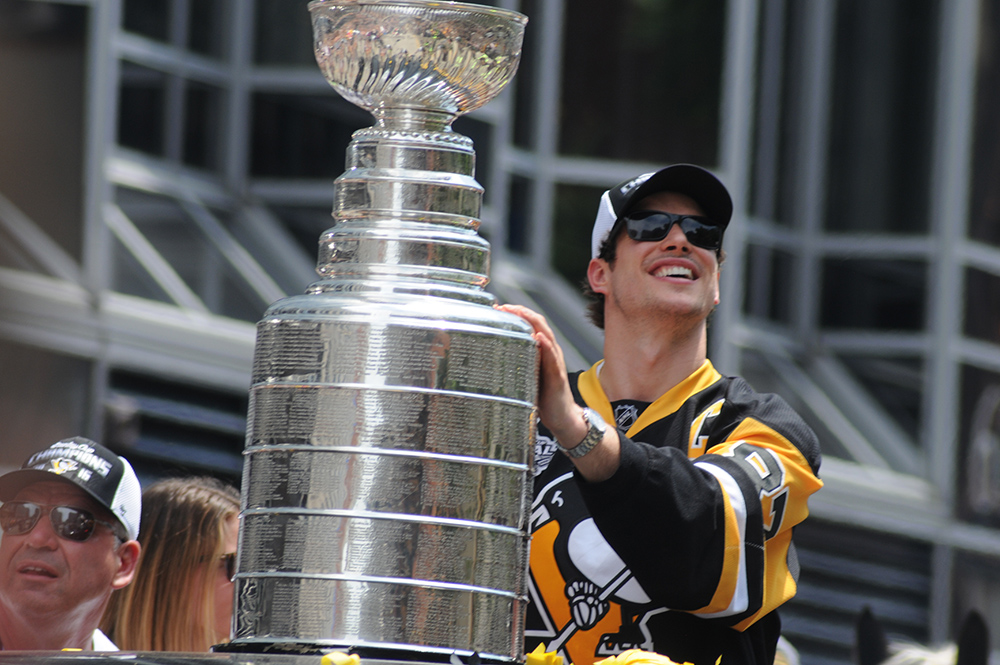 Between the 2009–10 and 2014–2015 seasons, the Penguins struggled in the playoffs, only making it as far as the Eastern Conference finals once (2012–13). But their fortunes changed in 2015–16 when, after a slow start and a mid-season coaching change, the team rolled through the playoffs and won the Stanley Cup, defeated the San Jose Sharks four games to two. Seven years after winning his first Cup at age 21, Crosby was named the Conn Smythe Trophy winner as playoff MVP with six goals and 13 assists. Showing his trademark humility, upon winning the individual award he said, "I look at this as a total team effort. I tried to work hard every night, do my job just like everyone else. I don't know if I did anything different or specific. I think everyone just competed, everyone tried to do what's expected of them, tried to play their role. If you do that every night, we have a pretty good chance of winning."

The following year, the Penguins were again victorious, defeating the Nashville Predators to win their second consecutive Stanley Cup. Crosby, who scored 27 points in the playoffs (including one goal and six assists in the Final), also received the Conn Smythe Trophy for the second year in a row. He is the third player to win the award in back-to-back years, after Bernie Parent (1974, 1975) and Mario Lemieux (1991, 1992).

Crosby has played extensively for Canada in international hockey competitions. He won a silver medal with Canada's world junior team in 2004 and a gold medal in 2005. He also played for Canada at the 2006 and 2015 International Ice Hockey Federation (IIHF) World Championship where Canada placed fourth and first, respectively.

Most famously, though, Crosby is remembered for scoring in overtime against the United States at the 2010 Olympics in Vancouver to give Canada the gold medal in men's hockey. After weathering some criticism for not scoring enough earlier in the tournament, Crosby came through in the clutch at 7:40 of the sudden death overtime period. The stick and gloves Crosby wore to score his winning goal are now at the Hockey Hall of Fame in Toronto, along with the puck. Some pundits have suggested that this goal, known as the "golden goal," will have a similar meaning to Canadians as that of the goal scored by Paul Henderson at the 1972 Summit Series.

Four years later at the 2014 Olympic Winter Games in Sochi, Russia, Crosby captained Canada’s men’s hockey team to a second consecutive gold medal when they defeated Sweden 3–0. Crosby’s only goal of the tournament gave Canada a 2–0 lead in the final. In 2015, Crosby joined what is known as the “triple gold” club (players who have won a Stanley Cup, Olympic gold and World gold) when he led Canada’s men’s team to the IIHF World Hockey Championship in Prague. He scored a goal and an assist in the team’s 6–1 victory over Russia.

In 2016, he was chosen as captain of Team Canada for the World Cup of Hockey, an international competition held at the Air Canada Centre in Toronto, Ontario.