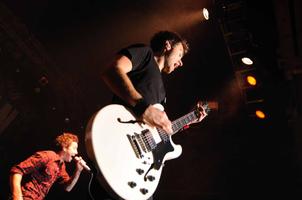 Bouvier, Comeau and Desrosiers were in a modestly popular punk band called Reset that formed in 1993 and released No Worries in 1997 and No Limits in 1999 before forming Simple Plan. Bouvier played bass in addition to singing with Reset, but with Simple Plan is exclusively a frontman.

Simple Plan signed with Lava/Atlantic/Warner and released its No Pads, No Helmets...Just Balls debut album in 2002. Its success caught many by surprise as singles/videos "I'm Just a Kid," "I'd Do Anything," "Addicted" and "Perfect" became hits and the group quickly built a devoted young fan base. The Arnold Lanni-produced album was certified double-platinum in Canada, the United States and Japan, platinum in Australia and gold in the United Kingdom, Indonesia, Malaysia, Mexico, New Zealand, the Philippines and Singapore as the band performed around the globe. The band has drawn comparisons to American pop-punk bands Blink-182 and Good Charlotte, and the singers for both of those groups contributed vocals to No Pads, No Helmets...Just Balls.

Live in Japan was issued in Japan only while a DVD titled A Big Package for You was released internationally in late 2003, and was certified platinum in Canada and gold in the US and Australia. Simple Plan was nominated for a best new group Juno Award in 2003 and the DVD was a Juno finalist in 2004, the same year the band released its Bob Rock-produced Still Not Getting Any... sophomore album. It also spawned four popular singles/videos ("Welcome To My Life," "Shut Up!," "Untitled" and "Crazy") and performed impressively internationally. It was certified: quadruple-platinum in Canada; double-platinum in Australia and Indonesia; platinum in the U.S., Japan, Malaysia, New Zealand and Singapore; and gold in Mexico, the Philippines and Thailand. Simple Plan was nominated for a group of the year Juno, while Still Not Getting Any... was a finalist for best album and best pop album.

Simple Plan continued to tour aggressively and fans who couldn't see the band in person could purchase 2005's MTV Hard Rock Live, which was certified gold in Canada. The quintet won its only Juno when it received the fan choice award in 2006.

Simple Plan left some of its pop-punk roots behind on its slightly more eclectic self-titled third studio album, which was released in February 2008. It featured production by Nate "Danja" Hills (Justin Timberlake, Nelly Furtado), Max Martin (Backstreet Boys, Britney Spears) and Dave Fortman (Evanescence, Bif Naked). The record debuted on the Canadian sales chart at number two and was certified platinum on the success of singles "When I'm Gone," "Your Love Is a Lie" and "Save You," which Bouvier wrote about his brother's fight with cancer. The album was also certified platinum in Brazil and gold in Mexico and earned Simple Plan 2009 Juno nominations for group and album of the year.

Blink-182's Mark Hoppus, Good Charlotte's Joel Madden, Weezer's Rivers Cuomo, Canadian rapper K'Naan and British pop vocalist Natasha Bedingfield contributed to 2011's Get Your Heart On!, which was produced by Canadian Brian Howes (Hedley, Hinder). It featured a return to the more upbeat sound found on the first two albums and debuted at number two on the sales chart in Canada, where it has been certified gold. It didn't perform as well as earlier efforts in other countries. "Jet Lag" and "Astronaut" were issued as singles.

Simple Plan's total album sales are around four million in the US and Canada and more than 7.5 million worldwide.

The Simple Plan Foundation was established in 2005 and has made contributions to the Make-A-Wish Foundation, the MTV Asia Aid Benefit, MADD (Mothers Against Drunk Driving), RADD (Recording Artists, Actors, and Athletes against Drunk Driving) and other charitable organizations. The group's charitable efforts earned it the Allan Waters Humanitarian Award at the 2012 Juno Awards. A book titled Simple Plan: The Official Story was published in both French and English later in the year, and proceeds from it benefited the Simple Plan Foundation. The band embarked on a world tour in 2012 that continued into 2013.

Bouvier hosted an MTV reality television series called Damage Control that debuted in 2005 and ran for two seasons. He also owns a clothing line called Role Model Clothing along with Comeau and Langlois.