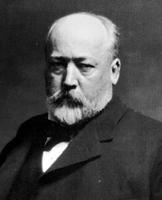 Sir William Cornelius Van Horne, railway official (b at Chelsea, Ill 3 Feb 1843; d at Montréal 11 Sept 1915). Van Horne's formal education ended at age 14, when he began his railway career as a telegrapher with the Illinois Central Railroad in 1857. He worked for several American railways and by 1880 he was general superintendent of the Milwaukee Road. Van Horne was appointed general manager of the CANADIAN PACIFIC RAILWAY on 1 Jan 1882, and he used his excellent managerial skills to improve the organization of construction on the prairie section, which was complete from Winnipeg to Calgary by Aug 1883. Van Horne's drive and determination were responsible for the rapid completion of the main line between Montréal and Port Moody (seeRAILWAY HISTORY).

Van Horne succeeded George STEPHEN as president of the CPR in 1888. He regarded the Canadian Pacific as a transportation and communications system. At his insistence, the company developed a telegraph service and entered the express business. He launched the famous Empress line of Pacific steamships in 1891 - fast, luxurious vessels which ran between Vancouver and Hong Kong, carried mail for the British government and increased tourist and freight traffic between Canada and the Orient. Van Horne was also the founder of CP Hotels; as an amateur architect he helped plan the Banff Springs and Château Frontenac hotels. He negotiated the famous CROW'S NEST PASS AGREEMENT, which substantially reduced freight rates on Prairie grain and flour. After his retirement from the presidency in 1899, he promoted the building of a railway in Cuba. Van Horne was a complex personality: a brilliant railway manager, a gourmet and a man with tremendous intellectual curiosity. He was awarded a knighthood in 1894. To mark his passing, the CPR ceased operations for a day and Cuba held a day of mourning in his honour.