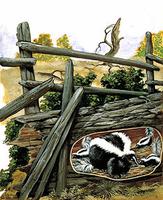 Skunks are nocturnal, passing the day in burrows (artwork by Jan Sovak, 1989). 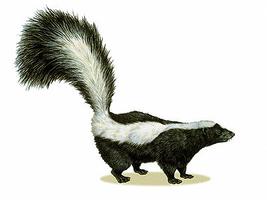 The striped skunk occurs in every province except Newfoundland and Labrador (courtesy Macmillan Illustrated Animal Encyclopedia). 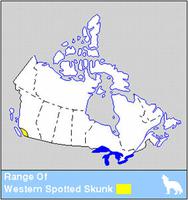 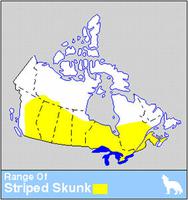 The skunk is a carnivorous, cat-sized mammal. Skunks were previously considered as part of the weasel family (Mustelidae) but DNA research has placed them in their own family, Mephitidae. This animal is black in colour with conspicuous white stripes or spots. Adults average 54 centimetres long and weigh 1.6 kilograms. Two genera occur in Canada.

Distribution and Habitat
The striped skunk (Mephitis mephitis) occurs in every province and territory except Nunavut and Newfoundland and Labrador. The smaller western spotted skunk (Spilogale gracilis) occurs in southwestern British Columbia, and ranges south to the western United States and Mexico. Both species prefer open areas of mixed forests and grasslands.

Skunks are nocturnal, passing the day in burrows. They sleep through the coldest months, frequently several animals together. INSECTS, vegetation, fruit, BIRDS' eggs and small MAMMALS are the major foods of these omnivores. As opportunistic scavengers, skunks have adapted easily to urban environments. While considered a pest in residential areas, the skunk's food preferences help farmers. They are susceptible to rabies and are an important carrier of the disease. 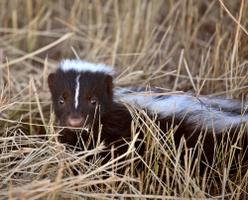 Males are polygamous and the female alone cares for young. Litters, averaging 4 - 6 young, are born after a 60- to 62-day gestation. Young grow rapidly and at 2 months are fully weaned and have operational scent glands. They usually stay with the mother through the winter.