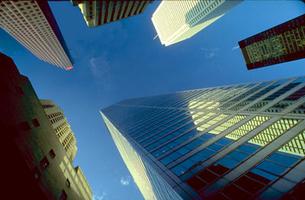 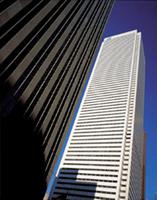 Headquarters of the Bank of Montreal, Toronto, designed by Sidney Bregman (photo by Steven Evans). 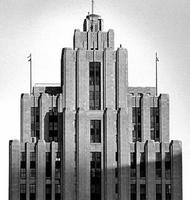 Canadian Imperial Bank of Commerce, Toronto (old building). Architects York and Sawyer with Darling and Pearson, 1929-31. Like other tall buildings of the time, its tower is stepped back at the top. The arches and sculptures are in a Romanesque style (photo by William Dendy). 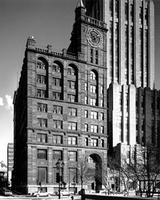 New York Life Building, built in 1888, Montreal. The Aldred Building is beside it on the right (photo by Brian Merrett). 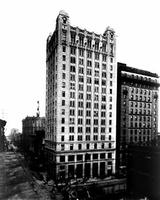 The CP Building (1912) was one of Canada's earliest skyscrapers, similar to the Traders Bank (right) with its solid base, repetitive floors and ornamental top (courtesy Library and Archives Canada/PA-60392).
PreviousNext

Skyscrapers are our cities' exclamation points: they mark the places that for reasons of finance, exchange and location are the focal points of our urban life. These vertical expressions of architectural bravado and engineering moxie can at once symbolize a city and belittle a street. Some beautiful, some banal, they became a key defining icon of the 20th century, particularly in North America.

A skyscraper, simply put, is a building of well-above-average height with useable storeys and a self-supporting skeleton structure. There is no fixed height at which buildings qualify, but those less than about 40 metres (130 feet) or 10 storeys have historically not been considered skyscrapers. Useable upper storeys, made possible by the perfection of the passenger elevator in the 1850s, distinguish skyscrapers from edifices such as the CN TOWER in Toronto, at 553 metres (1815 feet) North America's tallest free-standing structure. A skeleton frame, typically of steel or reinforced concrete, overcomes the need for the massive bearing walls otherwise required to carry the weight of tall buildings. A relatively thin cladding attached to the frame gives the skyscraper its public face; brick and architectural terra cotta were the materials of choice in pre-World War Two years; glass, aluminum, precast concrete and thin stone veneers gained favour in the post-World War Two era.

Chase for the Clouds

The first building to combine well-above-average height, useable storeys and a skeleton structure was the 40 metres (130 feet) Equitable Life Assurance Co Building in New York, completed in 1870, though the 55 metres (180 feet) Home Life Insurance Co Building in Chicago, completed in 1885, is considered by some to have been the first true skyscraper. The skyscraper was an American invention, made possible by technological advances, made viable by rising real estate values and made desirable by a strong urge for prestige. By the end of the 19th century, the race to be the tallest was well under way. Skyscrapers approached 80 metres (260 feet) by 1875, 122 metres (400 feet) by 1899, 244 metres (800 feet) by 1913 and reached 381 metres (1250 feet) in 1931 with the completion of the Empire State Building in New York. There the title of the world's tallest building rested until the completion in 1973 of the 442 metres (1450 feet) Sears Tower in Chicago. The twin Petronas Towers in Kuala Lumpur, Malaysia, topped off at 452 metres (1483 feet) in 1996 trumped the Sears Tower, but they too have been surpassed. The Taipei 100 in Taiwan, completed in 2004 at 509 metres (1670 feet), is the world's tallest completed skyscraper, but the Burj Dubai tower under construction in the United Arab Emirates passed it in height in 2007 and is expected to reach a height in excess of 800 metres (2600 feet).

Canada entered the era of tall buildings with the 8-storey New York Life Insurance Co Building in Montréal (1887-89). Not a true skyscraper, it has massive masonry bearing walls 1 metre (3.2 feet) thick at the base instead of a skeleton frame. The 6-storey, 33 metre (108 foot) Robert SIMPSON department store in Toronto, "towering up at the corner of Yonge and Queen streets" according to the Canadian Architect and Builder on its completion in 1895, has a self-supporting steel frame, elevators and above-average height, giving it a defensible claim to being Canada's first bona fide skyscraper (see BURKE, HORWOOD AND WHITE).

It was the challenge of building the tallest building in the British Empire, however, that set off a cross-country chase for the clouds. The 15-storey Traders Bank of Canada on Yonge Street in Toronto, built in 1905, opened Toronto's bid for the hotly disputed title. The 13-storey, 45 metre (148 foot) Dominion Building, completed in 1910, moved the crown from Toronto to Vancouver, where it remained with the completion of the 17-storey, 81 metre (265 foot) World (Sun) Tower in 1912. A year later the title returned to Toronto and the 16-storey Canadian Pacific Building, moving across the street in 1915 to the new 20-storey, 91 metre (300 foot) Royal Bank. In spite of self-imposed height limits, Montréal challenged for the title in 1928 with the completion of the 119 metre (392 foot) Royal Bank, but lost it the next year when Toronto's 120 metre (395 foot) Royal York Hotel (see SPROATT AND ROLPH) soared past that city's height bylaw. The completion of the nearby 34-storey, 141 metre (464 foot) Canadian Bank of Commerce in 1931 capped a quarter-century of skyscraper one-upmanship in Canada.

A second era of high-rise construction followed on the heels of Canada's post-World War Two prosperity. After an unchallenged run of 31 years, Toronto's Canadian Bank of Commerce finally lost "tallest building in the Commonwealth" honours in 1962 to Montréal's 192 metre (630 foot) PLACE VILLE MARIE, the largest office complex in the world in floor area when built (see ARCOP). Five years later the tallest building title moved back to Toronto; there it passed from the 223 metre (731 foot) Toronto Dominion Bank tower to the 239 metre (784 foot) Commerce Court West in a succession of bank towers. In 2007 the tallest skyscraper in Canada and 36th tallest in the world was the 72-storey, 298 metre (978 foot) First Canadian Place (now First Bank Tower) in Toronto, completed in 1975. There are roughly 42 skyscrapers higher than 145 metres (475 feet) in Canada, mostly in Toronto, Montréal and Calgary; until 1997 buildings more than about 137 metres (450 feet) tall were not permitted in Vancouver.

Finding an appropriate image for skyscrapers preoccupied architects for many decades. For the earliest tall buildings, designers struggled with the popular architectural styles of the day, extruding to unprecedented proportions the Romanesque, Second Empire, Italianate, Gothic and even Chateauesque idioms, as in the towered and turreted Confederation Life Building in Toronto (1890-91), before settling on compositions based on a Classical design vocabulary of a base, a shaft and a capital. Dozens of early skyscrapers across Canada utilize this tripartite framework, including the 11-storey Union Bank of Canada (now Royal Tower) in Winnipeg (1903-04), the 10-storey McCallum Hill Building in Regina (1912-14; demolished 1982) and the massively regal 24-storey Sun Life Assurance Co Building in Montréal (1914-31).

There was a deliberate break with the old styles and historical imagery after World War One, resulting in an exciting new way of visualizing skyscrapers. The architects of the rigorously non-historicist Art Deco-style Aldred Building in Montréal (1929-31), for example, emphasized its 96 metre (316 foot) height by placing the windows in continuous vertical bands and stepping the walls back as the tower rises above the street. More typical in Canada is the stylistically less daring Canadian Bank of Commerce in Toronto (1929-31), which also uses setbacks and vertical bands but reverts to Romanesque arches and carvings for its decorative details. One of the most inventive in this era of distinctive skyscrapers is the 22-storey Marine Building in Vancouver (1929-30): each of its setbacks is capped in white terra cotta, recalling the nearby snow-capped North Shore mountains.

While setback towers persisted in Canada into the 1950s, a radically different aesthetic gained favour in the wake of the country's future-oriented post-World War Two mood. The prototypical Seagram Building in New York (1954-58), built under the direction of Phyllis LAMBERT for Canadian multinational Joseph E. SEAGRAM and sons (see also SEAGRAM COMPANY LIMITED), introduced the elegant minimalist "curtain wall" tower to corporate North America. This style revolutionized the appearance of skyscrapers by reducing the exterior to a thin skin of large expanses of glass held in place by a grid of slender metal members. The glass curtain wall was introduced to Canada in Oshawa's City Hall (1953) and used to great effect on the elegant 22-storey B.C. Electric Building (now The Electra) in Vancouver (1955-57; see THOMPSON, BERWICK, PRATT AND PARTNERS). The minimalist approach became popular at a time of growth in Canada, and a large number of Modernist towers rose from plazas in cities across the country.

This cool, rational style's severe "less is more" simplicity, best illustrated in the Toronto Dominion Bank Tower in Toronto (1964-67), soon succumbed to monotonous sameness; in reaction, architects began to cleave the sleek cubes of the 1950s and 1960s into multifaceted towers such as the Royal Bank (1972-77) in Toronto, or the crop-topped Petro-Canada Centre in Calgary (1979-84), to impart individuality. The 20th century drew to a close with the resurrection of pre-Modernist romanticism: Toronto's multi-setback TD Canada Trust Tower (1987-90) and Montréal's gable-roofed Tour 1000 de la Gauchetière (1988-92), for example, both drew heavily on the aesthetic touchstones of the early 20th century's distinctive landmark towers.

The engineering challenges in high buildings are straightforward: minimize the building's overall weight so it doesn't settle too much; maximize its ability to withstand high winds so elevators don't bind and windows don't crack; move people and services up and down the building without sacrificing too much floor space - and do this all within a budget. Solutions to these challenges have taken many forms. The earliest skyscrapers utilized a semi-rigid steel frame, where the steel members were bolted or rivetted together. Heights were limited to about 10 to 15 storeys, above which the flexible building would distort in high winds. By the 1930s steel frames with rigid connections allowed skyscrapers to rise to about 40 storeys. Adding vertical shear trusses at the core of the building and/or horizontal trusses in a belt around the perimeter allowed heights of 60 or more storeys.

The technique of using a lattice of closely interconnected columns and beams, in steel or concrete, to create a tall, very rigid "tube" allowed post-World War Two skyscrapers to soar up to 100 storeys; exterior cross-bracing to further stiffen the rigid tube was added in the 1960s. Bundling a number of rigid tubes together, as in the Sears Tower, pushed the height limit well beyond 100 storeys. "Superframe" structures, with rigid tubes one on top of another, and extremely strong "supercolumns" at the building corners are now being explored. Alternatives to rigid structures are also being developed; damping the movement of tall buildings with a pendulum-like counterweight inside shows some promise. A problem related to additional storeys is the need for more elevators, which take up valuable floor space. The double-decker elevator is one solution to this problem: with 2 cars, one on top of the other, more people can be moved per elevator shaft. An early double-decker system was installed in Toronto's First Bank Tower.

The era of skyscrapers may be waning in North America as the need to congregate large numbers of people in one place is made obsolete by improved telecommunications; phones, faxes and e-mail, not high-rises, are becoming the meeting points for business. In the 1980s the world's 10 tallest buildings were in 3 US cities. Two decades later, 8 of the 10 tallest are in the Far East, and no new challengers are on the drawing boards in North America. The next target, a 1000 metre skyscraper, will likely be achieved in Asia or the Middle East. The most common reasons to build tall skyscrapers are no longer related to functional or financial considerations, but to self-advertising and ego. At the same time, many aging skyscrapers have reached their expected lifespan. Rehabilitating energy-inefficient and functionally obsolete towers has become a challenge for the engineers and architects who built them only a generation or two ago. A few older Canadian office towers have been converted to residential use, and others have been stripped to the frame and rebuilt to current standards. This has raised the question of an appropriate approach to HERITAGE CONSERVATION for significant skyscrapers designed with a limited lifespan.