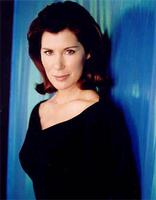 Sonja Smits and Eric Peterson co-starred in The Company Theatre's The Test in 2011 (photo by Guntar Kravis, courtesy The Company Theatre).
(photo by Tim Leyes).
PreviousNext
Sonja Smits, actor (b at Sudbury, Ont 13 April 1955). Sonja Smits was raised on a dairy farm in the Ottawa Valley, not far from Ottawa. As a teenager, she enrolled in the Ottawa Little Theatre and later studied at the theatre program at Ryerson in Toronto. Impatient to get to work, she left after 2 years and spent 2 seasons with an English-language theatre group in Quebec City. She spent time at the CentreStage Theatre in London, Ont, and began appearing in films such as David CRONENBERG's Videodrome (1983), for which she received a GENIE Award nomination for best supporting actress, and That's My Baby! (1984), receiving a second Genie nomination, this time for best actress.

Smits spent several years working in Los Angeles before CBC cast her as the patrician Carrie Barr in the drama Street Legal. She appeared in 80 episodes of the popular series (1987-92), leaving 2 years before its ultimate demise, her character killed off in a hit-and-run accident; the episode was watched by 1.6 million Canadians. During her time with the show she won a 1988 GEMINI Award for best actress and was nominated again in 1993. That year she delivered an acclaimed performance as Morag Gunn in the television adaptation of Margaret LAURENCE's The Diviners, and was nominated for another Gemini Award.

Her success in Street Legal led to a starring role as Sally Ross, the head of a high-powered Bay Street firm, in Traders (1996-2000). The show enjoyed popular and critical acclaim; Smits's character was allowed a lesbian affair and when as Ross she suffered a major cancer scare, causing her to cut her hair, the event was widely publicized. She was nominated for 2 more Gemini Awards in 1999 and 2000. Traders was followed by The Eleventh Hour (2002-05), a series about a fictional newsmagazine television show. Smits also portrayed Mona PARSONS in a Historica Minute about a Nova Scotia woman who, while living in Holland during WWII, joined the resistance, was imprisoned by the Nazis, and escaped.

On the theatre stage, Sonja Smits is a powerful presence. She appeared in the original production of Judith THOMPSON's Perfect Pie at TARRAGON THEATRE in 2000 and in The Vagina Monologues in Toronto along with Chantal Kreviazuk, Shirley DOUGLAS and Mary WALSH. She was seen as Mrs. Robinson in The Graduate at the GRAND THEATRE in London and played the lead in Walker's Nothing Sacred at the Winter Garden Theatre. She also performed in Summer and Smoke and Uncle Vanya at THEATRE CALGARY, in Later at Toronto Free Theatre and in Significant Others at the Beverly Hills Playhouse. With NIGHTWOOD THEATRE she starred in That Face as a manipulative mother with destructive addictions. For the Company Theatre and CANADIAN STAGE she co-starred with Eric PETERSON in The Test, a comedic look at two generations of a family juggling some pressing questions.

Smits received the Crystal Award for Outstanding Achievement in 1997 from Women in Film and Television and was a founding member of the ACTRA Women's Caucus. In 2004, Smits was given the ACTRA Toronto Award of Excellence.