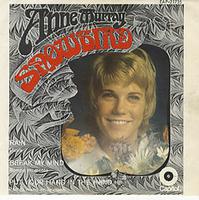 Album cover for the 1970 release of Anne Murray's Snowbird, produced by Gene Maclellan.

"Snowbird." Pop song by Gene MacLellan. Only his second composition, it was written in 1968 and uses the snowbird as a metaphor for freedom. A single by Anne Murray (Cap 72623) introduced her, and the song, to pop and country music audiences internationally in 1970, selling over one million copies in that year alone. "Snowbird" was published in 1970 by Beechwood Music of Canada and appears in Edith Fowke'sCanadian Vibrations (Toronto 1972).

"Snowbird" has been recorded more than 100 times, appearing on LPs by many other singers, including the composer (Gene MacLellan, Cap ST-6348), Bing Crosby with Count Basie, the Family Brown, Burl Ives, Loretta Lynn, Al Martino, Elvis Presley, and Andy Williams. Instrumental versions have been recorded by the duo pianists Ferrante and Teicher, the guitarist Chet Atkins, and the orchestra leaders Percy Faith, Bert Kaempfert, Michel Legrand, and Lawrence Welk. An orchestral arrangement by Milan Kymlicka has been placed in the Imperial Oil McPeek Pops Library. In 1990 BMI listed "Snowbird" as its 19th most-performed song of the previous 60 years. It was an inaugural song inductee of the Canadian Songwriters Hall of Fame in 2003.