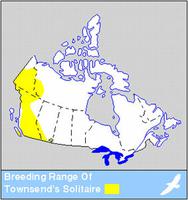 Solitaire is the common name for 13 species of New World thrushes, one of which occurs in Canada. Ornithologists also use the term for 2 species belonging to an extinct family related to the dodo and the modern pigeon family. Townsend's solitaire (Myadestes townsendi) summers in open mountain forests north to the Yukon and winters at lower elevations north to southern BC.

Males and females are similar in appearance, being brownish grey overall with longish tails and short bills. Their clear, sweet, loud warbling notes are among the most beautiful of bird songs.

Solitaires nest on or near the ground or in rock crevices. Usually 4 dull white eggs spotted with brown are laid. In summer, solitaires feed on insects; in winter, as much as half their diet is fruit.