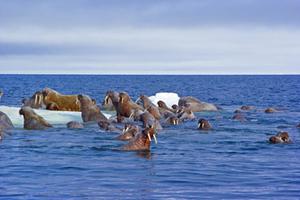 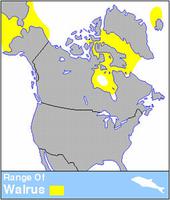 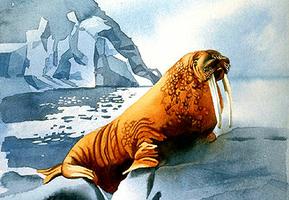 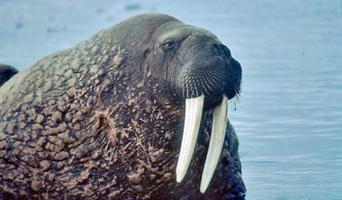 Both sexes have enlarged upper canine teeth, which form tusks up to 60 cm long (courtesy Canadian Museum of Nature). 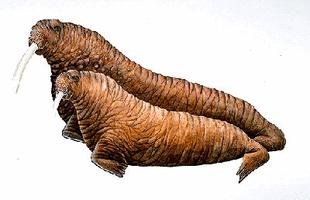 The walrus (Odobenus rosmarus) is a pinniped, or fin-footed mammal. It is the only member of the family Odobenidae, the name of which comes from the Greek words for "tooth" and "walks," referring to walruses using their tusks to help haul themselves onto the ice. There are two subspecies: Pacific walrus (O.r. divergens) and Atlantic walrus (O.r. rosmarus). Only the Atlantic walrus occurs in Canada. Scientists suggest a third subspecies (O.r. laptevi), lives in the Laptev Sea, Russia, while others consider these walruses to be members of the Pacific walrus group.

Atlantic walrus adult females average about 2.75 m in length and weigh approximately 850 kg. Average males are roughly 3 m long and about 1,000 kg. There is regional variation in size. For example, walruses from Hudson Bay are smaller than others.

The walrus has a massive body with a large neck and disproportionately small head. The skin is thick, with many folds and creases, and with a sparse coat of coarse hair. Skin colour ranges from cinnamon to grey with pink in the folds and on the abdomen, and varies with skin temperature and related changes in blood flow. For example, basking in the sun causes a walrus's skin to become pink. Beneath a walrus’s skin is a layer of blubber, about 6 cm thick. The feet are flippers and the hind feet can be turned forward for movement ashore. Both sexes have enlarged upper canine teeth, which form tusks up to 60 cm long. The stiff whiskers covering the muzzle are mobile and highly tactile.

Atlantic walruses range from central Canada to the Kara Sea, Russia. Pacific walruses occur from the eastern Kara Sea to Alaska. In Canada, the Atlantic walrus population can be further divided into four groups: south and east Hudson Bay, northern Hudson Bay–Davis Strait, Foxe Basin and Baffin Bay. A fifth group, the Maritime population, lived on the coasts of Nova Scotia, Newfoundland and the Gulf of St. Lawrence, but was extirpated in the 17th and 18th centuries due to overhunting. Today, the southern limits of the Atlantic walrus are generally James Bay and the Labrador coast.

Within their range, walruses are dispersed widely. They are normally found in groups of a few to hundreds of individuals. These two features make estimating population size difficult.

The walrus is often associated with the edges of sea ice in Arctic seas. In winter, they gather in polynyas (i.e., an area of open water surrounded by sea ice) and in summer they haul themselves onto ice or land to rest and bask.

Although walruses are capable of deeper dives, most feeding is done in waters less than 100 m deep. Their main prey are bottom-dwelling invertebrates, primarily bivalve molluscs. Some also kill or scavenge seals.

Most females attain sexual maturity between 5 and 10 years of age and males between 7 and 14 years. Breeding is polygamous, with single large bulls attending groups of 5–20 or more females. Young, physically mature males may have limited breeding opportunities due to this social structure. Mating occurs between December and March. Gestation lasts about 11 months, with most births occurring from mid-April to June. Calves may nurse for three years although they may also take some solid food during this time. Generally, calves are produced at three-year intervals, though births in alternate years sometimes occur. Polar bears and humans are the main predators of the walrus.

The large herds of walruses Jacques Cartier discovered on Sable and Cape Breton islands and on the Îles-de-la-Madeleine in 1534 were extirpated in the 16th and 17th centuries. In fact, between 1650 and 1850, European whalers almost exterminated the walrus in both the eastern and western Arctic.

Walruses are taken by the Inuit annually for subsistence purposes, and the walrus remains important to the Inuit for food, dog food and ivory, in addition to its cultural importance.

The Committee on the Status of Endangered Wildlife in Canada (COSEWIC) lists the Atlantic walrus as “special concern,” while the International Union for Conservation of Nature (IUCN) places the mammal in their “data deficient” category. The IUCN’s designation reflects the difficulty in assessing population numbers, a challenge also recognized by COSEWIC and other organizations. The Maritime population remains extirpated, despite the occasional sighting.

Some researchers suggest the most significant threat to the Atlantic walrus, which COSEWIC notes is on the brink of being elevated to threatened status, is overhunting. Walrus hunting is open to both Inuit communities and sport hunters, despite being limited to the Inuit from 1928 to 1994. Sport-hunting licences are issued with the aim of benefiting northern communities. While hunting quotas exist in some areas, there is little research to show whether they are stringent enough to protect walrus populations.Data on the number of harvested walruses is limited, further complicating research.

Other threats to the Atlantic walrus may include increased human activity, such as industrial development (e.g. mining) and ecotourism. (See Endangered Animals.)