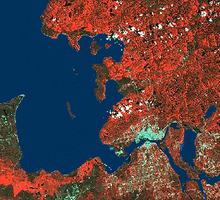 St Marys River (Ont) connects Lake Superior to Lake Huron and forms part of the US/Canada border. It is 125 km long and drops 6.4 m through the sault (old French term meaning "rapids" or "falls"), which gives the Canadian and US cities of Sault Ste Marie their names. The rapids offered prime habitat for fish, particularly whitefish, which the Ojibwa caught in nets from their birchbark canoes.

The obvious strategic value of the river was well known to the Indigenous people before Étienne Brûlé travelled the river in 1622. Samuel de Champlain included the falls on his 1632 map. The Jesuit mission of Sainte Marie du Sault was founded on the river in 1668 but was abandoned in 1698 because of the Iroquois Wars, as was the first of 2 French fur-trade posts, which was established in 1689. The North West Company arrived in 1783 and in 1798 built the first canal around the rapids. The canal was destroyed by American troops during the War of 1812.

Today there are 4 locks on the American side, operated by the US Corps of Engineers, and a smaller lock on the Canadian side, part of the Sault Ste Marie Canal National Historic Site. The locks and the river make up one of the busiest canal systems in the world, despite being frozen for up to 5 months of the year. The International Bridge (1963) spans the river, connecting the twin cities of Sault Ste Marie. The river was designated as a Canadian Heritage River in 2000.