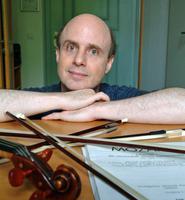 Marvin, who holds dual citizenship, studied in the US with Joseph Silverstein (violin), Martha Katz (viola), and Eugene Lehner (chamber music), and was awarded a Tanglewood fellowship in 1973. He began his professional career as a violinist in the Buffalo Philharmonic, where he remained until 1977. Then, pursuing his interest in early music, he played with many period instrument groups, among them the Smithsonian Chamber Players, Aston Magna, Banchetto Musicale (Boston) and Concert Royal (New York). In the 1950s there was growing interest in Canada in historical instruments: Medieval, Baroque and Renaissance, and in the 1970s and 1980s with the period instrument movement blossoming, Marvin moved to Toronto in 1984 to join Tafelmusik as principal second violin.

Marvin has performed in chamber music and collaborated on recitals of late 18th-century repertoire with such artists as Malcolm Bilson, Penelope Crawford, Geoffrey Lancaster, and Colin Tilney, and in the ensembles Les Coucous Bénévoles and the Nota Bene Period Orchestra (Waterloo, Ont), including recordings on the Sony, Vivarte, CBC SM 5000 and Hyperion labels, among others. He was the concertmaster for Opera Atelier's tours of Japan performing in Mozart operas (1998 and 2000). In 2011, Marvin has continued his associations with Tafelmusik and Opera Atelier in various capacities.

Marvin trained in New York with bow maker William Salchow, and began making his own bows in 1980, showcasing them at the first Boston Early Music Festival. He honed his skills in historical bows, of which few original models survive, through extensive research on bows made prior to 1800 found in museums and in private collections.

With far-reaching expertise in historical bows, and specializing in 17th- and 18th-century reproductions for violin, viola, cello, bass, and the viol family including the viola d'amore, Marvin has written articles on early bows, and taught about their history. He has collected more than 20 samples of woods used in their construction over the past three hundred years. Among bow makers who have studied with Marvin are Trevor Ewert, Peter Visentin and Basil de Visser (Amsterdam); those who have influenced him include Jaak Lorius, David Tamblyn, and William Monical. Canadian violinists who own or have commissioned historical bows by Marvin include Thomas Georgi, Jeanne Lamon, Paul Meyer, Aisslinn Nosky, Susan Spier, and David Stewart, as do internationally known performers Jaap Schröder and Reinhard Goebel.

Marvin has taught chamber music and baroque and classical violin technique at the Oberlin Baroque Performance Institute (1978-1994) and at the Tafelmusik Baroque Institute. He has continued to make early and modern bows (with an output of about 400 by 2011) and do selective restoration work.