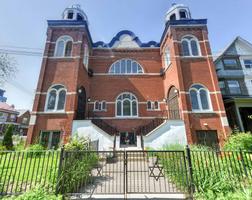 According to Jewish law, a synagogue is defined as any place where 10 men can gather for worship and study. Tradition holds that the synagogue was established to provide an alternative for those who were unable to travel to the temple in Jerusalem. The absence of sacrificial rites, the rise of rabbinic teachings and the ceremonial reading of the Torah (the Five Books of Moses) gave the synagogue its unique character. Soon after the destruction of the second temple in 70 CE, it was this institution that became the focus of Jewish communal worship.

To understand the architecture of the sanctuary, it is first necessary to appreciate the key elements and traditions that have shaped it. The sanctuary contains 2 primary elements: the bimah, or platform upon which the Torah is read to the congregation; and the aron kodesh, or ark in which the Torah scrolls are stored. The aron kodesh is often incorporated into the interior architecture of the sanctuary, but it can also be a freestanding cabinet. Traditionally, it is always found on the east wall, so that the congregation, in praying, faces towards the east, and Jerusalem.

The relationship between these two components (bimah and aron kodesh) directs the architecture of the synagogue. Originally, the bimah was always placed in the centre of the room, with a straight passageway leading to the aron kodesh. This allowed a direct and ceremonial path between the 2, which is exploited during the service. The process of removing the Torah from the aron kodesh, carrying it to the bimah, reading from it and then transporting the scroll back to the ark is a highly ritualized component of the service. This duality was found in both Eastern European (Ashkenazi) and Middle Eastern (Sephardic) synagogues. However, over time, and particularly as a result of the early 19th-century Reform movement, this standard plan has been somewhat modified. Although it continues to exist in many traditional synagogues, in some congregations, the bimah and the aron kodesh have been placed in close proximity to each other on the same platform, along the east wall. This change has to some extent diminished the inherent tension between the two elements and compromised the ritualized movement between them.

There are other traditions that have had a tangible effect on synagogue architecture. For example, men and women have traditionally been separated. This custom led to the inclusion of balconies or raised seating on the sides of the room for women. (It should be noted that this rule is no longer observed in Conservative, Reform and Reconstructionist congregations.)

In keeping with the commandment "Thou shalt have no graven images," representations of human forms are often forbidden. Ornamentation is therefore heavily oriented towards symbols (Stars of David, signs of the zodiac or natural forms).

Because of the history of persecution in Europe, synagogues usually present a modest face to the street. This was in fact often a legislated requirement. Frequently the building and its courtyard would be hidden behind a high and nondescript wall.

By the end of the 18th century, when synagogues were first built in Canada, there was a stylistic quandary to be faced: which style was appropriate for a Jewish place of worship? Neoclassical and Gothic styles were considered to be "Christian" and therefore unsuitable. Revivals associated with the Middle East, such as Egyptian and Moorish, had no such tainted associations and indeed were seen to have historic links to the Holy Land. These 2 were favoured throughout the 19th century.

The First Congregation in Canada

The Shearith Israel Congregation in Montréal was the first to be established in Canada, in 1768 after the Conquest, when Jews were first allowed into Québec. Nine years later, the congregation built their first building on Chenneville Street, in the Faubourg St-Laurent, just outside the gates of the fortified city. In Newton Bosworth's Hochelaga Depicta of 1839, there is a plate entitled Jew's (sic) Synagogue, accompanied by the following text: "...The Synagogue...is a fine specimen of the Egyptian style of architecture. The front is of cut stone, and adorned with a handsome portico with two columns. This Synagogue is the only one in British North America...."

This building remained the only formal place for Jewish worship in Montréal until 1846 when a group of German, Polish and English-speaking Jews founded a congregation that was to become the Shaar Hashomayim (Gates of Heaven). Their synagogue was established first on De Bullion Street in 1859.

The need for 2 synagogues in a relatively small city demonstrated the differences in the liturgy and customs of the two principal groups of Jewish immigrants: the Sephardic population, who were coming from England, with roots in Spain and the Middle Eastern countries and the Ashkenazi population that was then beginning to emigrate from Eastern Europe.

By the late 1870s, there were established congregations in Victoria, Winnipeg, Toronto, Hamilton, Montréal, Trois-Rivières and Québec City. Of the synagogues of that era, the Temple Emanu-el of Victoria is the lone remaining building, and it has been in continuous use by the Jewish community since it opened its doors in 1863. The building is a two-storey clay-brick structure in the Romanesque style with fine corbelling under the eaves and gables. The windows are paned with stained glass in simple geometric patterns. Prominent on the main facade is a circular "rose" window. The interior is almost entirely occupied by the sanctuary; the men's seating is grouped around a central bimah. On the east wall is the aron kodesh, protruding outside the perimeter of the square (in plan) building. The second storey is a women's gallery - U-shaped in plan and creating a double-height central space between the east wall and bimah. This central space is further accentuated by a domed ceiling.

In many ways the Temple Emanu-el typifies the architecture of those buildings built as synagogues in Canada from the mid-19th century to the onset of World War II. Common to these buildings are facades which combine elements of local vernacular with the revivalist styles still perceived as best fitting the image of a synagogue. The traditional plan of the sanctuary is typified by the description of the Temple Emanu-el of Victoria.

In 1887 the Shearith Israel of Montréal built their new synagogue on Stanley Street in what was referred to as the Judeo-Egyptian style - a templelike building, capped by an imposing pediment. Although the composition was inspired by classical architecture, the detailing owed its origins to ancient Egypt. This sort of associative styling was also found in the second Shaar Hashomayim Synagogue (1885) on McGill College Street in Montréal and in the first Holy Blossom Synagogue (1897) of Toronto, both of which combined intricately detailed stone craftsmanship with Byzantine influences.

The first significant waves of Jewish immigrants from Eastern Europe began in the decades bracketing the start of the 20th century. While the majority of newcomers were attracted to the cities, with their greater economic possibilities and established community life, many settled in the western Prairie provinces and in the regions outside the established urban centres. Modest houses of worship, more ephemeral in construction than those found in the cities, were built.

Although the synagogue in Canada remained principally a place of worship until the beginning of World War II, other community activities began to exert their influence on these institutions and reshape the form of the building itself. The Temple Emanu-el of Montréal, built in 1911 and enlarged in 1922, was one of the first congregations in Canada to be based on the Reform service. From the exterior, the building, with its cruciform plan and Romanesque detailing, could easily be mistaken for a church. The founding members planned their building to include facilities for education, social gatherings and auxiliary groups, and in keeping with the Reform practice, the auditoriumlike sanctuary had mixed seating. (This building was destroyed by fire.)

In 1921 the Shaar Hashomayim of Montréal purchased land at the corner of Côte St-Antoine Road and Kensington Avenue. Melville Miller designed their new building, which was described as being "cathedral-like." The facades were constructed of grey vitrified brick and sandstone and there were small Moorish cupolas that alluded to "mystic orientalism." The sanctuary, with its coffered ceiling and combined bimah and aron kodesh, accomplished separate seating by flanking women's galleries rather than a balcony.

With the building of the Holy Blossom Temple of Toronto on Bathurst Street in 1938 (Chapman and Oxley with Maurice D. Klein) came the last major innovations in synagogue architecture before the modern (post-WWII) period: these innovations include a campuslike planning of the institution, the inclusion of a parking lot and the use of modern building materials. Although the new Holy Blossom's sanctuary borrows significantly from the Temple Emanu-el in New York City, built 10 years earlier and of stone, this structure is formed and finished in reinforced concrete.

After the end of World War II, the survivors of the European Holocaust began arriving in Canada. These immigrants did not follow the traditional path of establishing themselves in the inner-city neighbourhoods, but joined the exodus to the burgeoning suburbs. With this shift, many older congregations were forced to relocate, and new congregations were formed. This movement had two results: the first was the abandonment of historic synagogues, often resulting in their conversion into other uses; and the second was a wave of new synagogue construction. The search for the "appropriate style" was no longer a driving concern, and for the duration of the 1950s and 1960s the new buildings reflected a more adventurous and expressive spirit, representative of the mainstream architectural trends of the time.

As with the Holy Blossom Temple, the sanctuary was often a visibly distinct element in the overall composition of the building. Common forms and motifs include open courtyards (Beth El, St John's, Nfld, 1959); colourful mosaic murals on the facade (Young Israel of Montréal, 1953, Harry Mayerovitch); and interesting methods of bringing natural light indirectly into the sanctuary through clerestory or imposing vertical windows (Shaarey Tzedec, Calgary, Abugov and Sunderland; and Beth Tzedec, Toronto, 1955, Peter DICKINSON).

During the 1970s, synagogue building was greatly curtailed because of the increased cost of construction and of maintenance. Smaller Jewish communities continued to sell off their buildings, to respond to the continued shift in demographics. However, the growing interest in heritage conservation has awoken wider appreciation for the older historic synagogues and promoted restoration campaigns for several that remain in use. This, along with the embellishing and refurbishing of existing structures with new artistic interpretations and the building of generally smaller synagogues to serve new suburban Jewish communities, are now the main areas of synagogue-building activity.