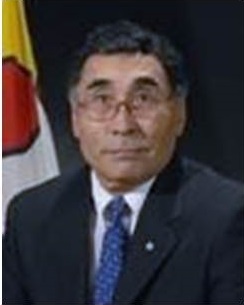 Born at his father’s hunting camp, Curley was raised in the traditional Inuit way of life. Curley grew up with a strong attachment to the land and his culture, hunting and trapping with his father. When he was eight years old, Curley and his family moved south to Coral Harbour so that he and his siblings could attend a local day school.

In 1963, Curley travelled to Chilliwack, British Columbia, to take a heavy-equipment-operator’s course. When he returned home, he worked for six months with the federal Ministry of Transport as a machine operator.

Weary of outside influences that were threatening Inuit culture and ways of life, Curley sought to make a difference in his community. He took courses at the Ottawa Technical High School and Algonquin College, which helped to improve his grasp of the English language. From 1966 to 1970, Curley worked as a development officer with the Department of Indian Affairs and Northern Development (now Indigenous and Northern Affairs Canada). He also served as the Naujaat (Repulse Bay) settlement manager in 1970–71. In these roles, Curley dealt with development and housing issues in Inuit communities. Around this time, he also served as the editor of the first Inuktitut newspaper in Canada, the Keewatin Echo.

Curley helped to form the Inuit Tapirisat of Canada (now Inuit Tapiriit Kanatami) in 1971 and was its first president. ITK is an organization run by Inuit to represent their particular political, economic and social needs and interests. As president, Curley accomplished much; one of the most notable achievements being his leadership in a successful movement to have the government replace the term Eskimo with Inuit in all official documents and discourse.

After four years as ITK president, Curley assumed other leadership positions in the Inuit community, including as executive director of the Inuit Cultural Institute (1975 to 1983) and president of Nunasi Corporation, an Inuit development corporation responsible for the investment of the proceeds of Inuit land claims settlements. Curley also played a crucial role in the negotiation and implementation of the Nunavut land settlement.

In 1979, Curley ran as a Liberal candidate in the federal election but was narrowly defeated by Peter Ittinuar. That same year, however, Curley was first elected to the Legislative Assembly of the Northwest Territories, representing Keewatin South. He led an Inuit shadow caucus, which formed the largest single block of votes within the legislature.

On 21 November 1983, Curley was re-elected for the newly renamed riding of Aivilik (formerly Keewatin South). He was appointed to the Executive Council of the Northwest Territories in 1984, becoming minister of Economic Development until early 1987. During his time in office, Curley held several other cabinet posts, including minister of Energy, Mines and Resources (1984–87), minister of Public Utilities (1984–87) and minister of Government Services (1986–87). He was defeated in the territorial election on 5 October 1987 but remained an Inuit leader and activist, pursuing interests mainly in the private sector.

Curley returned to territorial politics in 2004, when he was acclaimed (i.e., no other candidate came forward at the election and no vote was held) to represent the constituency of Rankin Inlet North in Nunavut’s Legislative Assembly. He was acclaimed in Nunavut’s general election in 2008 as well. He tried and failed to become Nunavut’s premier in 2004. From 2004 to 2008, Curley served on a number of committees, including as a member of the Management and Services Board, the Standing Committee on Rules, Procedures and Privileges, and the Standing Committee on Government Operations and Accountability. Curley was also chair of the Standing Committee on Infrastructure, Housing and Economic Development. On 27 October 2008, Curley was appointed minister of Health and Social Services and was also responsible for the Workers’ Safety and Compensation Commission, and the Utility Rates Review Council (for the 2008–09 fiscal year).

On 15 September 2010, Curley was re-appointed as Minister of Health and Social Services. He also became the Government House Leader and the minister responsible for Nunavut Housing Corporation and for Homelessness.

In 2011, Curley opposed the splitting of the Health and Social Services Department. He resigned in November from cabinet in protest, arguing that the department needed to stay united in order to provide the best care and services to the people of Nunavut. Curley stayed on as a member of the Legislative Assembly, however.

In 2004, Curley — a Christian fundamentalist — opposed Nunavut premier Paul Okalik’s advocacy of gay rights in a new Human Rights Act. Curley saw the issue of gay rights as part of a larger issue about not only religion and morality but the influx of southern Canadian influences northward.

In the late 1990s, Curley was the business manager for Nunavut Tunngavik Inc., the organization that implemented the Nunavut land claim. Curley was also the president of the Nunavut Construction Corporation, which builds and leases government offices and housing in Nunavut.

In 1998, Curley was presented with a National Aboriginal Achievement Award (now the Indspire award) for his contributions to the Indigenous business community.

Curley has also been featured in two documentary films: Passage (about the true fate of the crew of the Franklin expedition) and Arctic Defenders (about the Nunavut land claim settlement). 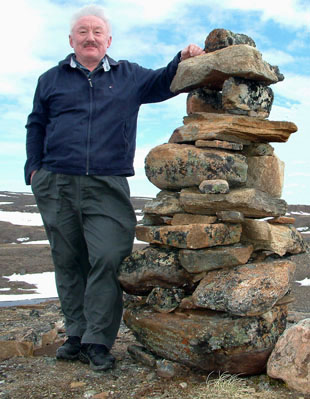