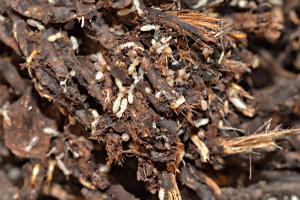 Termites are social insects of the infraorder Isoptera. They may be thought of as “social cockroaches,” as they evolved from their wood-eating cockroach ancestors approximately 200 million years ago, making them the earliest known example of social insects. Often called "white ants," termites are only distantly related to true ants. Their colony-based lifestyle evolved independently of other social insects — for example, ants, bees and wasps.

Because termites feed primarily on cellulose — a major component of plant material such as wood — they destroy many plant-based products, such as house frames and utility poles. As such, they are often considered pests. 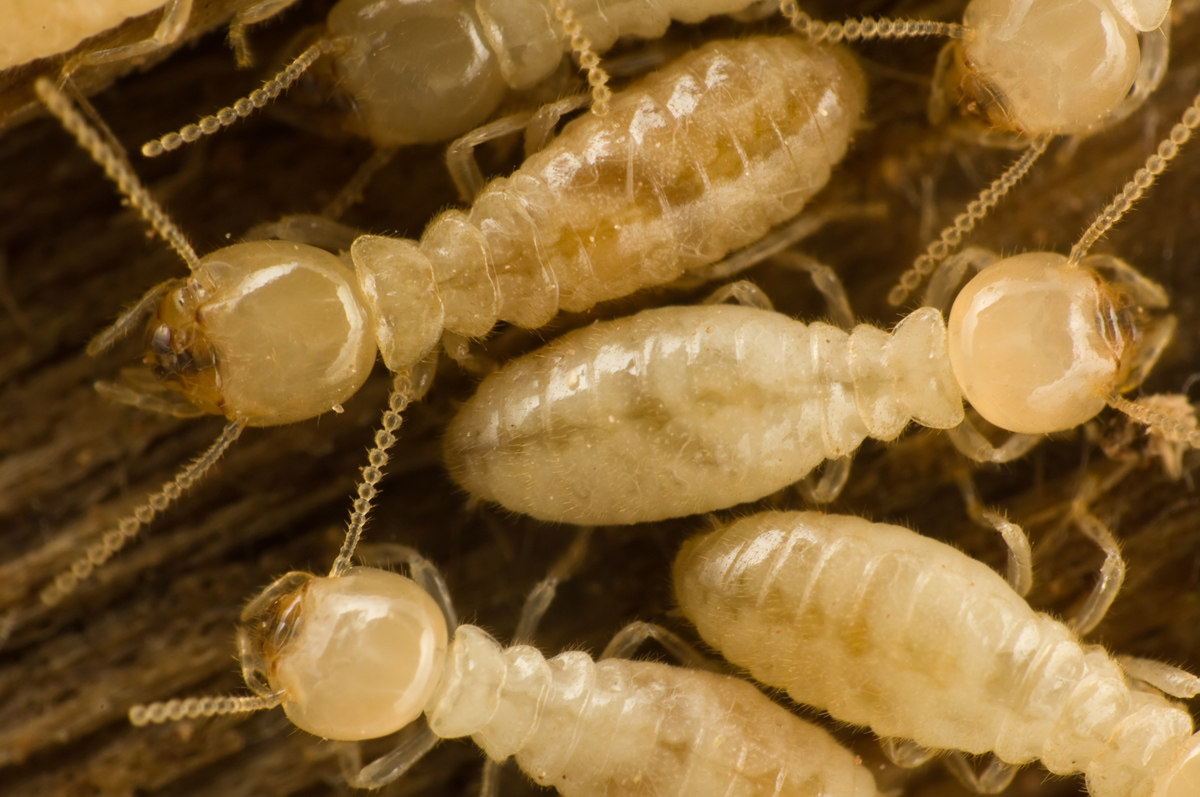 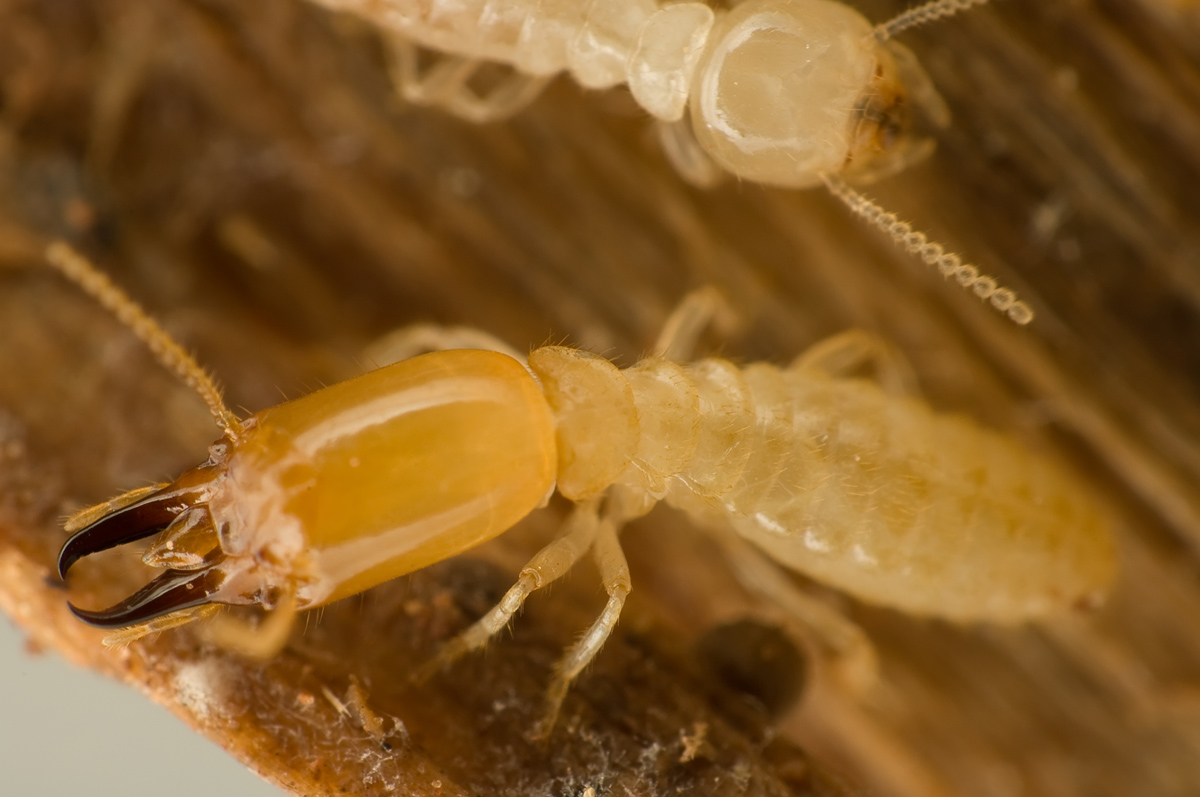 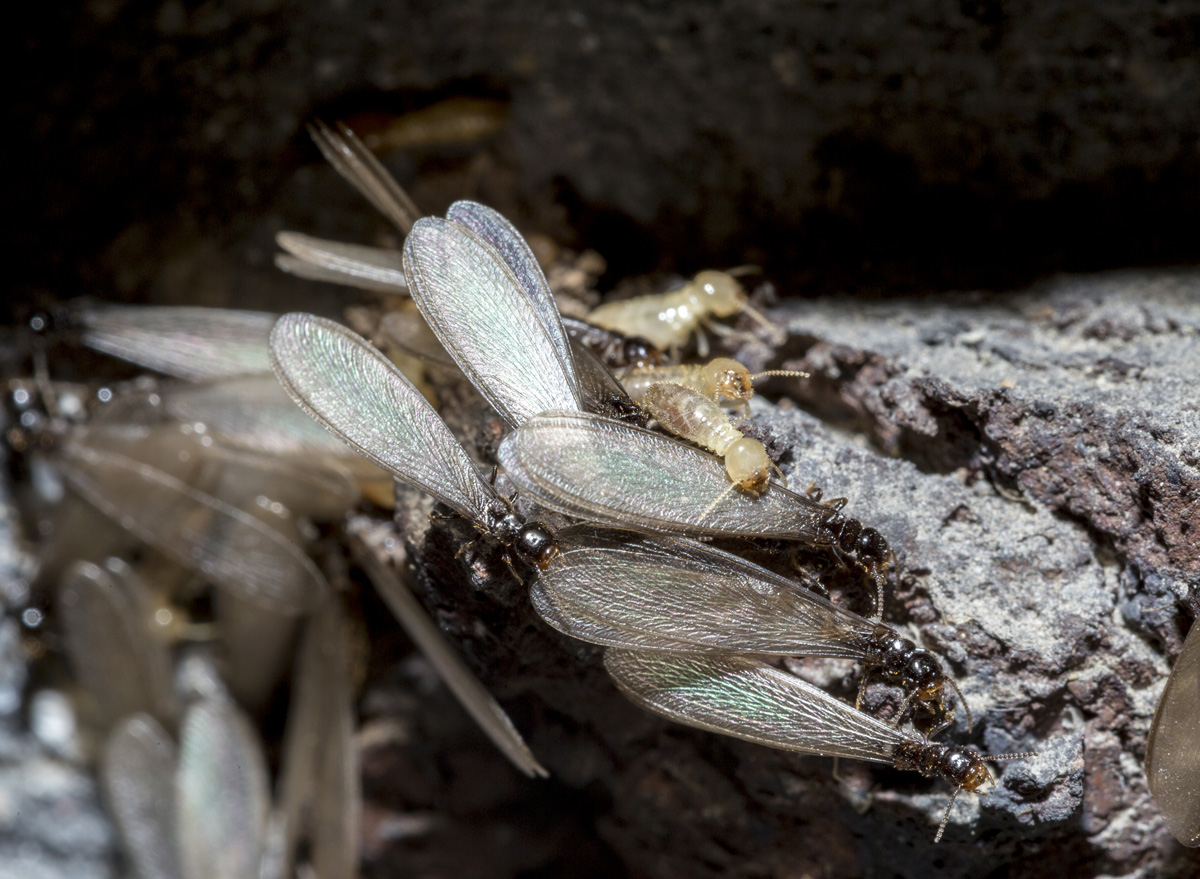 Subterranean reproductive termites (those with wings) and a few workers (centre right).
PreviousNext

Most termites are pale and waxy, about 5–15 mm long, and have short, slender antennae, short legs, and a cylindrical or slightly flattened body. Beyond these general characteristics, each caste of termite (workers, soldiers and reproductives) varies slightly in appearance. Workers are soft-bodied and pale, with mouthparts for chewing, while soldiers are larger and darker in colour, with longer, hardened heads. Soldiers of most species have long, hooked jaws, which they use as weapons; some have long snouts for spraying defensive chemicals. Workers and soldiers are wingless, while reproductives have four long wings of similar shape. The wings are shed after they find a mate. In most cases, termites either have small eyes or no eyes at all. Many species have a pore on the front of the head to secrete pheromones and/or defensive chemicals.

Termites are mostly found in tropical regions and are most diverse in tropical west Africa, and in rainforests in South America and southeast Asia. Termites may live underground in moist habitats, or above ground in dry habitats. Many species build mounds, some of which protrude up to nine metres above the ground.Subterranean species, like those found in Canada, do not build mounds, and are usually found in wood that is buried in or in contact with soil.

Canada has two native and one established species that are mainly found in human-made structures and environments. Two are native to British Columbia: the Pacific dampwood termite (Zootermopsis angusticollis) mainly infests moist deadwood, while the western subterranean termite (Reticulitermes hesperus) is the region’s major termite pest. The eastern subterranean termite (Reticulitermes flavipes) is found in many of eastern Canada’s densely populated areas, and is known for the most extensive termite-caused destruction in Canada and the United States. It is thought to have been introduced by ship to Toronto sometime between 1935 and 1938.

All termites are social, forming colonies with differentiated castes. Most species have three castes: workers, soldiers and reproductives. This is true of all Canadian termites, though colony structure varies in complexity among other species. Colonies are founded by two primary reproductives (often called “queen” and “king”), who tend the nest and feed their young until enough workers have developed to take over these tasks. Workers make up most of the colony, and their tasks include nest building, repair, foraging, feeding, and grooming of nest-mates. Soldiers are responsible for defending the colony, and both workers and soldiers are sterile.

Termites groom one another and perform “proctodeal trophallaxis,” which is the exchange of fecal matter between individuals. These behaviours have two very important consequences. The first involves the colony’s structure: castes are regulated and maintained by hormones or pheromones spread about the colony by reproductives and soldiers via grooming and trophallaxis. The second involves the termite diet, which consists mainly of cellulose, a sturdy plant sugar that most animals cannot digest. Termites do not directly digest cellulose, but instead have symbiotic gut microbes that do it for them. These symbiotic microbes are lost each time a termite moults (which they must do periodically as they grow), so a constant communal exchange of fecal matter is needed to ensure that all individuals in the colony can continue to digest food.

Once a colony matures (which may take up to 10 years), new reproductives are produced by its founders once or more per year when they expose newborns to the appropriate pheromones. From these mature colonies, large numbers of winged reproductive individuals emerge and form mating swarms, in which males and females pair off, land, break off their wings, and seek a suitable nesting site where they begin producing a new colony. The two founders mate for life and the female is usually much larger than the male, being full of unlaid eggs. Termites undergo incomplete metamorphosis, meaning that juveniles are much like small adults, and are therefore active in the colony. Unlike in social bees, wasps and ants — whose worker and soldier castes are exclusively female and develop from fertilized eggs, and whose reproductive males develop from unfertilized eggs — the sterile worker and soldier castes of termites include both males and females, and all individuals develop from fertilized eggs.

Termites primarily feed on cellulose, a major component of wood and other plant materials. They are important decomposers, as they break down dead trees and fallen logs into usable substances for other plants, while simultaneously aerating and mixing the soil. Termites are especially dense and environmentally important in tropical areas, where their colonies cover up to one-third of the soil surface and cycle up to one-third of all plant material through their guts. Globally, the total mass of all termites approaches three times the total mass of all humans. Much like in cows, which also rely on symbiotic microbes to digest cellulose, methane is formed as a byproduct in the guts of termites, and consequently, termites contribute significantly to atmospheric levels of this greenhouse gas (see Climate Change). Though they mostly attack deadwood, termites can also do considerable damage to living woody shrubs and trees.

The colonies of many termite species are inhabited by other arthropods, such as beetles or flies; these species co-evolved with their termite hosts, and live in a mutually beneficial arrangement. Some tropical species tend gardens of fungi; in East Africa, these termites form the largest known colonies, which may be up to 100 years old.

Termites cause economically significant damage in human environments. Due to the commercial movement of wood, as many as 28 species of termites are considered invasive throughout various parts of the world. Termites damage and destroy a variety of plant-based products, such as house frames, utility poles, fence posts, furniture, books, fabrics and so on. In Canada, the most significant termite pest is the eastern subterranean termite, Reticulitermes flavipes, which infests wood in contact with soil(the soil provides the termite colony with necessary moisture). They may also build above-ground mud tunnels from the soil to nearby wood. Infestations of R. flavipes spread slowly and can be recognized by the swarms of reproductives in very early spring. Infestations can be prevented by designing buildings with wooden components safely separated from the ground and sealed away from the outdoors, or by applying chemical treatments directly to wood or to soil (fence posts and utility poles are often pre-treated with such pesticides). Termites can also be controlled using baits, which contain poisons that either kill their symbiotic gut microbes, or are carried back to the colony and spread around through grooming and trophallaxis. Unlike their eastern relative, colonies of the western subterranean termite, Reticulitermes hesperus, can live in wood without contact with the soil, as long as there is enough moisture and food to sustain the colony.

Species that divide labour between reproductive and non-reproductive groups (castes) have overlapping generations of adults, and co-operatively care for their young. Many other insect species are considered “presocial,” as they exhibit some but not all of these characteristics.

A chemical secreted by one individual that alters the behaviour of others who detect it. Pheromones are a form of chemical communication.

The periodic shedding of the hard insect cuticle or exoskeleton in order to allow growth. Once hardened, new cuticle does not stretch, and so must be shed when the insect grows too large for it.

Unlike complete metamorphosis, this process does not have a pupal stage. Instead, juveniles — or nymphs — resemble adults more and more as they grow.