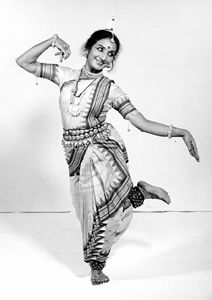 Menaka Thakkar, dancer, choreographer, director and teacher (born 3 March 1942 in Bombay, India). As artistic director of the Toronto-based Menaka Thakkar Dance Company and as founder (1974) and director of Nrtyakala: The Canadian Academy of Indian Dance, Thakkar has had a profound influence on the development in Canada of an appreciation for and the performance of the ancient art of Indian classical dance.

Thakkar began studying dance as a small child in Bombay. She participated in productions of her older sister, Sudha Khandawani, and subsequently trained in three very different classical Indian dance styles — Bharatanatyam, Odissi and Kuchipudi (as well as in Japanese dance) — with a number of renowned teachers in Bombay, Madras and Cuttak. After earning a BA in visual arts in 1963, she began her performing career. Thakkar came to Canada in 1972 to visit her brother, to observe Western classical and modern dance forms and to perform. The positive response to her work encouraged Thakkar to settle in Toronto the following year. Although she has returned regularly to perform and study in India, Thakkar has established firm Canadian roots and quickly involved herself in the dance community while stimulating a wider understanding of her native dance traditions.

Beginning in the early 1980s, students in the dance program at York University were able to gain credit for courses taken at her school. Now, as an adjunct professor of dance, Thakkar teaches a full course in Indian dance. She also teaches periodically at the National Ballet School.

Concurrently, during a ten-year period, Thakkar taught intensively in cities across Canada, creating a generation of young Indian dancers, many of whom have moved on to professional careers.

In 1984, she established the Menaka Thakkar Dance Company (MTDC) in Toronto. She remains its artistic director, choreographer and principal performer, making frequent cross-Canada appearances as well as regular seasons in her home base, Toronto. The company has also appeared frequently in Asia, Europe and Australia.

Although Menaka Thakkar is noted as a distinguished performer and teacher of Bharatanatyam, Odissi and Kuchipudi, she has drawn critical attention for her innovative development of these forms. She has created a feminist interpretation of the Indian epic, Ramayana, and has worked in collaboration with such Canadian choreographers as Dana Luebke, Grant Strate, Robert Desrosiers and Claudia Moore, producing a synthesis of Indian classical and Western dance forms.

Thakkar's contribution has been recognized with numerous awards in both India and Canada, including an honorary Doctor of Letters degree from York University in 1993. In 2008, she was among 35 prominent South Asian Canadians chosen for India Abroad magazine's "Power List." The Walter Carsen Prize for Excellence in the Performing Arts, awarded by the Canada Council for the Arts for "distinguished career achievement by a Canadian professional artist," was given to her in 2012.

Menaka Thakkar has published scholarly papers and dance articles in English and Gujarati and has lectured at international dance conferences. She has been featured in several television features in Canada, England and India. Thakkar received a Governor General's Performing Arts Award for Lifetime Artistic Achievement (Dance) in 2013.