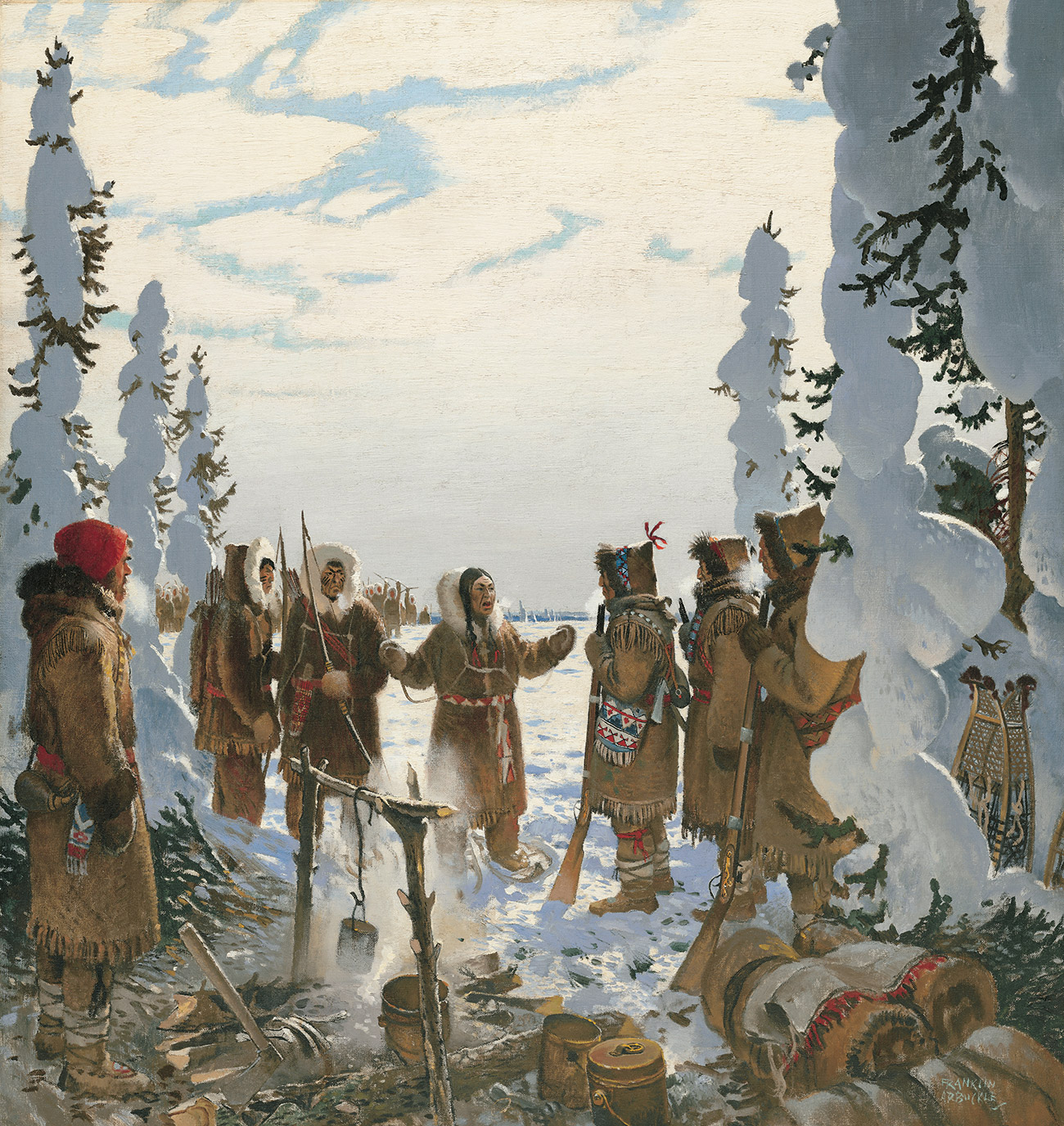 Thanadelthur, the "Ambassadress of Peace," was instrumental in negotiating peace between the Chipewyan (left) and Cree (right) people.

In the early 1700s, the Chipewyan and Cree peoples living in today’s northern Manitoba had a hostile relationship aggravated by the fur trade. The Chipewyan population that occupied territories northwest of today’s Churchill River did not possess firearms and did not come into regular contact with Europeans. However, the Cree who lived near the Hudson’s Bay Company (HBC) trading post York Factory (also known as York Fort) possessed muskets and ammunition provided by the HBC, which gave them the upper hand in Cree-Chipewyan conflicts.

In the spring of 1713, the Cree attacked a party of Chipewyan people, taking several of them captive, including a woman named Thanadelthur. That fall, Thanadelthur and another woman escaped and tried to find their way back to the Chipewyan.

Travelling overland for about a year, they endured hunger and extreme cold. Mere days after her companion had died, Thanadelthur followed tracks to a creek-side tent of HBC geese hunters. They brought her to York Factory in late November 1714.

DID YOU KNOW?
Thanadelthur’s origins are not known for certain. While some sources suggest she was Slavey or Tlicho (Dogrib), Thanadelthur is typically considered Chipewyan (Denesuline). (See also Dene.)

HBC Governor James Knight wanted to establish trade with the Chipewyan and expand business northward to Churchill River, into their traditional territory. He was also interested in mining precious metals on those lands. (See also Indigenous Territory.)

To succeed in this plan, Knight realized that he needed to end the Cree-Chipewyan skirmishes. He hoped Thanadelthur, who spoke English, Cree and Chipewyan, could apply her intelligence and enthusiasm as an interpreter, guide and peacemaker. In turn, Thanadelthur felt that if her people received guns in exchange for traded furs, this would help them improve their hunting and become stronger against enemies.

Knight sent Thanadelthur with HBC employee William Stuart (sometimes spelled Stewart) and 150 Cree people on a mission in June 1715 to meet with the Chipewyan. To survive the harsh conditions of a merciless winter, the expedition broke up into small parties. Most returned to York Factory, but Thanadelthur persuaded her group, including Stuart and about a dozen Cree people, to continue. When they came across the bodies of nine Chipewyan massacred by other Cree people, the Cree in her group feared retaliation and did not want to continue.

Strong-willed and tireless, Thanadelthur felt determined to make peace and have the Chipewyan trade with the British. She also wanted to be reunited with her people. Thanadelthur urged the Cree in her party to stay where they were for ten days while she sought them out. Following their tracks alone through the woods, she found a group of Chipewyan people who had escaped the massacre.

After ten days of compelling speech, her voice hoarse, Thanadelthur convinced the Chipewyan to return with her and meet with the Cree. She negotiated a truce between both groups and they shared peace-making ceremonies. Ten Chipewyan people, likely including Thanadelthur’s brother, returned with her to York Factory. They arrived in May 1716, nearly a year since the peace mission began. Knight and Stuart, impressed by Thanadelthur’s eloquence and remarkable feat, credited her with establishing peace.

DID YOU KNOW?
Thanadelthur was known by a few names including Joan and Slave Woman. Governor Knight likely called her Joan. Slave Woman might refer to her enslavement and kidnapping or to her possible identity as Slavey. An oral tradition from Black Lake in present-day Saskatchewan calls her “the woman in red.” This may originate from accounts of the Chipewyan wearing red hats. HBC records refer to Thanadelthur as the Ambassadress of Peace.

The new peace accord between the Chipewyan and Cree peoples paved the way for the HBC to expand their trade to the north. It enabled the HBC in 1717 to set up a permanent fort closer to Chipewyan territory in present-day Churchill, Manitoba.

By the spring of 1717, HBC’s Governor Knight prepared to send Thanadelthur with a Chipewyan delegation across the tundra to announce to their people that a new fort was to be established at Churchill River. (The post became known as Prince of Wales Fort in 1719.) Thanadelthur enthusiastically embraced the plan. She taught the Chipewyan people about which furs the British valued and how to prepare them for trade.

Thanadelthur never made HBC Governor Knight’s second proposed trip north due to fever and disease. After an illness of about seven weeks, she died on 5 February 1717. Knight said of her: “She was one of a very high Spirit and of the Firmest Resolution that ever I see in any Body in my Days and of great Courage.”

Establishing peace between Indigenous foes in the early 18th century, Thanadelthur was key to the success of the HBC’s expansion in northern Canada. The country commemorated her in 2000 as a person of national historic significance. Today, some residents of Churchill claim her as the town’s founder, and an image of her is featured on a road sign for a Thanadelthur Trail.