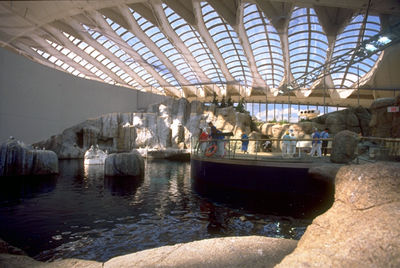 The Biodome in Montréal houses thousands of plants and animals representative of the ecosystems of the Americas (courtesy Canadian Tourism Commission).

Opened in 1992 and located in the former Olympic velodrome, the Montréal Biodôme is part of the “Space for Life” network, which includes Montréal’s Insectarium, Planetarium and Botanical Garden. Devoted to the environment, the Biodôme is home to thousands of plants and animals living in near-perfect recreations of their natural habitats.

Following the 1976 Montréal Olympics, the Olympic facilities were underused. Pierre Bourque, then director of the Montréal Botanical Garden, wanted to convert the velodrome into a Biodôme, a name that means “house of life.” A scientific team was created to tackle the many technological and conceptual challenges involved in making the museum a reality. (Filmmaker Frédéric Back, a passionate environmental activist, was part of the team.) Little by little, the enormous structure of the velodrome was transformed. In 1992, just in time for the 350th anniversary of the founding of Montréal, Mayor Jean Doré and Premier Robert Bourassa inaugurated the Montréal Biodôme — which was neither a zoo, a botanical garden nor an aquarium, but instead a combination of all three.

Recreated in the Biodôme are five of the most beautiful ecosystems in the Americas: the tropical rainforest; the Laurentian maple forest; the Gulf of St. Lawrence and its marine life; the Arctic world of the Labrador coast; and the sub-Antarctic islands. In 1992, the ecosystem concept was a world first, with its accurate representations of natural environments and interactions between plant and animal species.

Three words accurately sum up the mission of the Biodôme: education, conservation, and research. Through educational activities, day camps, nature interpretations and publications targeting the general public and school groups, the Biodôme team promotes a collective awareness of the environment.

The conservation of plant and animal species is equally important. The Biodôme is involved in helping endangered species to recover and preserving natural environments. One such example is the Western chorus frog, the smallest frog in Québec, whose habitat is seriously threatened. In 2000, the Act respecting threatened or vulnerable species designated this little amphibian as a “vulnerable wildlife species.” The Biodôme team, the Ministère des Ressources naturelles, and the Ecomuseum Zoo in Sainte-Anne-de-Bellevue have joined forces to develop expertise on the reproduction, hibernation, and way of life of chorus frogs in captivity. This will help ensure that, if the frog suffers a massive population loss in its natural habitat, there will be a survival population to carry on the species.

Biodôme researchers work to advance knowledge and participate in various biodiversity and sustainable development projects. They have made several discoveries, including that of a new species of mite. Additionally, researchers are trying to solve problems associated with urban wildlife such as the beaver, which has become increasingly invasive in populated areas. Although their main goal is to conserve the beaver in its natural habitat, they also want to limit its numbers. Males are captured and sterilized. With the birth rate decreasing, researchers track beaver pairs to determine the impact on the overall population.

With over 4,500 animals representing 250 different species and over 1,500 plants from over 500 distinct species, the Biodôme is nothing less than a laboratory that helps researchers to understand how plants and animals interrelate.

The humidity (75 per cent) and the temperature (up to 28ºC) in the tropical rainforest are maintained by a glass structure, so visitors can wander through a warm environment even in winter. This rainforest contains six giant trees that not only are decorative but also support the glass roof. At 2,600 m², it is the largest ecosystem in the Biodôme.

The contrast is remarkable when visitors move through Québec’s Laurentian forest; the ecosystem itself and its climate change in time with the seasons.

The marine life of the Gulf of St. Lawrence is faithfully recreated in an immense basin containing more than 2.5 million litres of seawater, created onsite from continuously filtered water from the municipal system.

The last two ecosystems are the Arctic (the Labrador coast), in which the temperature stays between 12ºC and 15ºC, and the Antarctic, with a temperature ranging from 2ºC to 5ºC.

Since it was founded, the Biodôme has played a leading role in conserving endangered species and has set itself apart through its innovative facilities. In 1994, it became a participant in the Species Survival Plan, a series of programs supervised by the American Zoo and Aquarium Association (AZA). Since then, the Biodôme has housed breeding pairs of small monkeys from the Amazon rainforest (Goeldi’s marmosets, golden lion tamarins, and cotton-top tamarins) and a species of parrot from northern Brazil, the hyacinth macaw. In 2002, the Biodôme earned the AZA’s prestigious international accreditation by meeting its very high standards.

In 2012, the Biodôme received the Énergia award for energy efficiency from the Association québécoise pour la maîtrise de l'énergie. The Biodôme was chosen for having incorporated geothermal and heat recovery systems in its ecosystems. These measures reduced energy costs by 27 per cent and represent annual savings of almost $1 million. The impressive plant and animal collections of the Biodôme make Québec a leader in research on and conservation of endangered species.