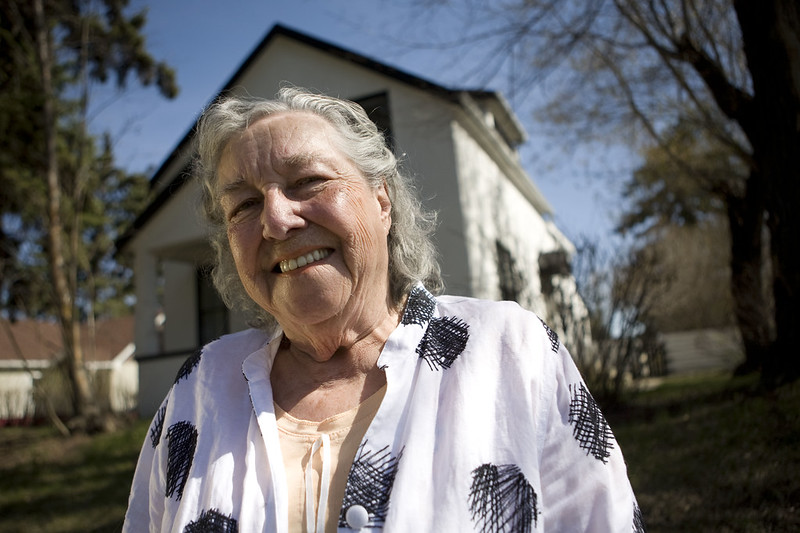 Chalifoux was born to Helene (née Ingwersen) and Paul Villeneuve in 1929. Her family is Métis on her father’s side, with ancestry rooted in the early Métis communities of St. Albert and Lac Ste. Anne. Born just before the Great Depression, Chalifoux grew up during a challenging economic time, one from which she learned the value of hard work early on in life. Always looking to help others, Chalifoux volunteered in soup kitchens during the Second World War. She also joined the military reserve force and worked in a Salvation Army canteen.

Chalifoux married Robert Coulter at a young age. He returned from the Korean War with what was likely post-traumatic stress disorder. She eventually left him, and according to The Globe and Mail (6 October 2017), when she went to social services seeking support for her family in 1958, her four children were taken away from her in what has become known as the Sixties Scoop. Chalifoux worked diligently to get her children back, finishing her high school education and holding down at least two jobs. For a single mother — who had also given birth to a daughter during this time — reuniting her family was no easy task. However, by 1965, Chalifoux regained custody of her children. She gave birth to other children some time after this ordeal. Chalifoux’s experience informed her activist work later on in life, particularly her work with Indigenous children, families and communities. (See alsoSocial Conditions of Indigenous Peoples in Canada.)

In the late 1960s, Chalifoux moved to Edmonton to look for work. It was there that she went into the Métis Association of Alberta to get her membership card updated, which brought her into contact with two former staff of the organization, Clarence Longmore and Ben Courtoureille, and she was offered a job as a fieldworker almost immediately. The late Stan Daniels was president of the association at this time, and gave Chalifoux the responsibility of setting up the welfare and land departments within the organization. During her time working as part of the association, Chalifoux advocated for the increase of affordable shelter, food and higher welfare grants and subsidies for Métis families. As part of her job, she was sent from cities in south and central Alberta to Slave Lake in northern Alberta, where she lived for the next 12 years.

Chalifoux served in the Company of Young Canadians, working on rural and Indigenous housing as well as community development. She was also the host and producer of a weekly radio show on CKYL Radio Peace River, making her the first Métis woman broadcast on private radio.

In the early 1980s, Chalifoux became involved in constitutional talks with Prime MinisterPierre Elliott Trudeau as part of a Métis delegation that went to Ottawa. The delegation was dedicated to getting Inuit, First Nations and Métis people recognized as separate and distinct nations.

On 26 November 1997, Prime Minister Jean Chrétien appointed Chalifoux as a senator, making her the first Indigenous woman and Métis person to serve in the Canadian Senate. She retired from the senate on 8 February 2004, at the mandatory retirement age of 75, and returned to Alberta.

During her time as a senator, she was chair of the Standing Committee on Aboriginal Peoples. She was also a member of various other standing committees, including those on agriculture and forestry, human rights, fisheries and oceans, illegal drugs, and legal and constitutional affairs.

As a senator, she was concerned with a range of issues, including Métis housing, drug company relations with the federal government, and environmental legislation. She contributed to the “Gathering Strength” report (1997) — the response of the Department of Indian Affairs and Northern Development to the report of the Royal Commission on Aboriginal Peoples.

In an interview with Dr. Denis Wall of the University of Alberta on 13 September 1999, Chalifoux stated that her role as a senator was “partly education and partly bringing the issues forward, especially for the Métis because we are truly the forgotten people.”

DID YOU KNOW?
Among her many other “firsts,” Chalifoux was the first Métis woman to be appointed to the University of Alberta Senate in the 1970s. She was also the first Métis person to chair the National Métis Senate and the Senate Constitution Commission.

Throughout her career, Chalifoux was invested in fighting for women’s and Indigenous rights. (See alsoIndigenous Women’s Issues in Canada.) She served as co-chair of the Alberta Métis Senate and was an appeal panel member with Alberta Family and Social Services. She also served as vice-president of the Aboriginal Women’s Business Development Corporation. Chalifoux spent several decades in Alberta working with organizations such as the Métis Women’s Council. In Slave Lake, she co-founded the Native Friendship Centre in the 1970s, and ran the first safe house for victims of domestic violence. (See alsoFriendship Centres.)

After her work in the Senate, Chalifoux founded the Michif Cultural Institute (now Michif Cultural Connections), a museum and resource centre dedicated to preserving and promoting Métis culture in the northern region of Alberta. A few years before she died in 2017, Chalifoux fought for the creation of St. Albert’s Meadowview Centre for Women’s Health and Wellness, which opened in 2011. Meadowview is dedicated to helping women recover from drug addiction.

Chalifoux was also concerned with preserving the Cree language and having it taught at northern schools. Her interest in language led to her writing the foreword for the book The Alberta Elders’ Cree Dictionary (1998) by Nancy LeClaire and George Cardinal. (See alsoIndigenous Languages in Canada.)

Chalifoux served as an Elder at both the Nechi Institute: Centre of Indigenous Learning in Alberta and the Northern Alberta Institute of Technology.

Suffering from failing health, Chalifoux died at the age of 88 at a care home in St. Albert, Alberta. She is remembered as a trailblazer for her work in Métis communities and for her support of Indigenous and women’s rights in Canada.

The Senator Thelma Chalifoux Award, presented annually by the Northern Alberta Institute of Technology since 2000 to individuals or organizations outside of the institute that have consistently demonstrated a commitment to Indigenous student success, honours Chalifoux’s political leadership and community work.

In June 2018, the University of Alberta announced that a residence building would be named after Chalifoux. Thelma Chalifoux Hall will house 520 students starting in Fall 2018.