A thunderstorm is a towering cloud system that moves across the countryside accompanied by lightning, thunder activity and usually rain showers, together with gusty winds near the Earth's surface. Other possible components of the storm system are hail, occasionally, and tornadoes, rarely.

Thunderstorms usually occur on summer afternoons. While a thunderstorm typically affects a given locality for only an hour or so during its passage overhead, the entire lifetime may be as long as 6-10 hours, along a pathway of several hundred kilometres. Thunderstorms generally begin with localized heating of the Earth's surface by the sun during the course of a relatively warm day. The air near the ground begins to rise here and there in a nonuniform manner, cooling as it ascends. At some level, this convective process leads to the rising air becoming saturated with water vapour as it cools. Condensation of the excess water vapour occurs, producing myriad tiny water droplets and a small, white structure known as a cumulus cloud results.

Further convection may cause a few of these cumulus clouds to continue growing as their updrafts remain strong and the cloud top continues to move upward. The droplets within them slowly become larger through further condensation until, at some level where the cloud is colder than 0°C, a very small fraction may freeze. These ice crystals grow rapidly at the expense of the unfrozen, supercooled, neighbouring droplets, to form snowflakes or ice pellets. Updrafts continue to carry them towards the top of the cloud until they become too large and heavy and begin to fall out. A mature cumulonimbus or thunderstorm cloud is now in existence. At this stage lightning may occur, the cumulonimbus cloud having become electrically charged during its growth. Meanwhile, the falling frozen raindrops and hail pellets within the cloud begin to melt, once they pass back through the freezing level. Should melting be complete, rain showers will result, taking the form of intermittently light and heavy rainfall, frequently accompanied by gusty winds and intense lightning activity. Should melting be incomplete, a feature confined to the larger and more intense thunderstorms, hail will occur with the rain.

While single thunderstorms may be produced on any reasonably warm, sunny day, the more intense ones frequently occur as a line of such storms (squall line) associated with the passage of a cold front (see meteorology). When particularly intense, one or more tornadoes may be formed along the thunderstorm squall line. Thunderstorms occur most frequently in late afternoon but they have been observed at all hours of the day and night. They are most prevalent from late May to early September, peaking in July, and are very rare in December to March. The settled parts of southern Canada have some 10-25 thunderstorm days per year, with the greatest frequency averaging 30-35 in southwestern Ontario. Thunderstorms are rare on the West Coast and in Newfoundland, under 5 per year; their frequency also falls off rapidly north of 55°N to only 2-3 per year over most of the Northwest Territories and Nunavut. 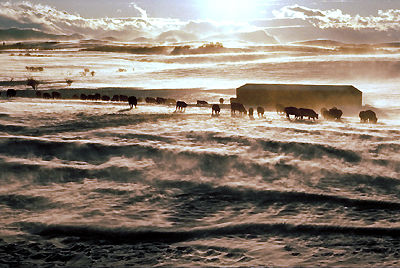