This article was originally published in Maclean’s magazine on August 21, 1995. Partner content is not updated. 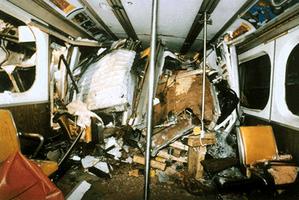 Girgis Sadd, a retired University of Toronto chemistry professor, had been taking his new neighbors - who had just arrived in Canada from Libya - on a tour of the city last Friday when their southbound subway train pulled to a stop just before the Dupont station in midtown Toronto. About three minutes later, Sadd and his fellow rush-hour passengers felt a sharp bang and heard what he later described as a sound "like a bomb going off." The train car was suddenly plunged into darkness and people fell onto the floor, a few of them clasping their hands in prayer. Within minutes, emergency transit workers bearing flashlights were leading startled passengers through the car's connecting doors and out into the subway tunnel. "We were walking very quickly," recalled Sadd, "because we were worried there was going to be a fire."

So began a night of horror and heroism, of painful sacrifices and simple acts of human kindness. Sadd's train was about to go out of service when it was rammed from behind by another subway at 6:07 p.m. Between them, the two trains were carrying about 700 people. Immediately after the crash, transit workers shut down power in the area as a precautionary measure, cutting off all lights as well as the ventilation system - sending temperatures soaring over 40° C at the chaotic accident scene, 100 feet below ground level. For the next eight hours, sweat-soaked rescue workers as well as a team of surgeons toiled feverishly to save dozens of commuters trapped in the wreckage - while aboveground, area residents and businesses responded to a plea for help with so much food and water that police had to ask them to stop. In most cases, the rescue efforts succeeded, but there were a few tragic exceptions. In one instance, a trapped female passenger had a leg amputated only to die shortly after midnight even as surgeons tried to save her. She was one of three known fatalities, all women. At least 36 other people were taken to hospital; by Saturday night, all but five had been released after being treated for cuts and bruises.

Even before the rescue effort ended, the focus shifted to how the crash occurred. Transit officials noted that the signal lights in the area, which warn drivers when they should proceed, slow down or stop, all appeared to be working, although further tests are required to confirm that. Among the other possible causes: brake failure, or human error by one or more of the transit drivers. On Saturday, police said they were continuing their forensic investigation of the incident, and a spokesman for the Ontario coroner's office announced that an inquest will be held as well. Meanwhile, senior transit officials tried to calm public fears by stressing that the tragedy marked the first crash fatalities on Toronto's subway system since it opened in 1954. "This is the safest system in North America," declared Metro Toronto councillor and Toronto Transit commissioner Joe Pantalone, who then added an obvious caveat. "That's no comfort," he said, "to anyone who got injured, or to the relatives of those who died."