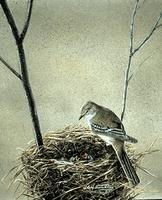 All flycatchers feed by capturing a flying insect and returning to a perch to eat it (artwork by Claire Tremblay).

The phoebe is named for its call, Fee-bee, with accent on the first syllable (Corel Professional Photos). Sound of the phoebe (press the Sound button) courtesy Monty Brigham, Bird Sounds of Canada. 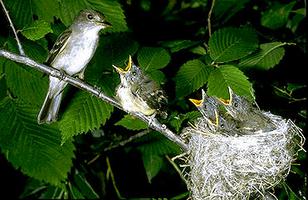 All flycatchers feed by capturing a flying insect and returning to a perch to eat it. Shown here is a bird of the species empidonax (Corel Professional Photos).
PreviousNext

The tyrant flycatcher (family Tyrannidae) comprises a large, diverse New World family of birds. The name flycatcher also refers to some members of the Old World family Muscicapidae and to some other birds.

Tyrannidae range from robin to warbler-size. Many are dull olive green; some are strikingly coloured. All feed by capturing a flying insect and returning to a perch to eat it. They are the only representatives in Canada of the suboscine perching birds (ie, those without true songs), and their loud, abrupt calls are the easiest means of distinguishing many species in the field.

The great crested flycatcher (Myiarchus crinitus) of eastern broad-leaved woodlands and olive-sided flycatcher (Contopus borealis) of coniferous forests across Canada are large compared with species of the genus Empidonax.

The yellow-bellied flycatcher (Empidonax flaviventris) of northern spruce forests, least flycatcher (E. minimus) of broad-leaved stands and alder flycatcher (E. alnorum) of alder and willow thickets are widespread from Newfoundland to the Yukon. Five others (E. oberholseri, E. hammondii, E. wrightii, E. occidentalis and E. difficilis) occur only in the West, and 2 southern species (E. virescens, E. traillii) breed only a short distance north of the US border.