A provision in the 1793 Act to Limit Slavery stated that any enslaved person who reached Upper Canada became free upon arrival. This encouraged a small number of enslaved African Americans in search of freedom to enter Canada, primarily without help. Word that freedom could be had in Canada spread further following the War of 1812. The enslaved servants of US military officers from the South brought back word that there were free “Black men in red coats” in British North America. (See The Coloured Corps: Black Canadians and the War of 1812.) Arrivals of freedom-seekers in Upper Canada increased dramatically after 1850 with the passage of the American Fugitive Slave Act. It empowered slave catchers to pursue fugitives in Northern states.

The Underground Railroad was created in the early 19th century by a group of abolitionists based mainly in Philadelphia, Pennsylvania. Within a few decades, it had grown into a well-organized and dynamic network. The term “Underground Railroad” began to be used in the 1830s. By then, an informal covert network to help fugitive slaves had already taken shape.

The Underground Railroad was not an actual railroad and it did not run on railway tracks. It was a complex, clandestine network of people and safe houses that helped persons enslaved in Southern plantations reach freedom in the North. The network was maintained by abolitionists who were committed to human rights and equality. They offered help to fleeing slaves. Their ranks included free Black people, fellow enslaved persons, White and Indigenous sympathizers, Quakers, Methodists, Baptists, inhabitants of urban centre and farmers, men and women, Americans and Canadians.

Railroad terminology and symbols were used to mask the covert activities of the network. This also helped to keep the public and slaveholders in the dark. Those who helped escaping slaves in their journey were called “conductors.” They guided fugitives along points of the Underground Railroad, using various modes of transportation over land or by water. One of the most famous conductors was Harriet Tubman.

The terms “passengers,” “cargo,” “package” and “freight” referred to escaped slaves. Passengers were delivered to “stations” or “depots,” which were safe houses. Stations were located in various cities and towns, known as “terminals.” These places of temporary refuge could sometimes be identified by lit candles in windows or by strategically placed lanterns in the front yard.

Safe houses were operated by “station masters.” They took fugitives into their home and provided meals, a change of clothing, and a place to rest and hide. They often gave them money before sending them to the next transfer point. Black abolitionist William Still was in charge of a station in Philadelphia, Pennsylvania. He assisted many freedom-seekers in their journey to Canada. He recorded the names of the men, women and children who stopped at his station, including Tubman and her passengers.

Jermain Loguen was another Black station master and leader in the abolitionist movement. He ran a station in Syracuse, New York. He permanently settled there after living freely in Hamilton and  St. Catharines, Upper Canada, from 1837 to 1841. Loguen was well known for his public speeches and articles in anti-slavery newspapers. Numerous women were also station masters. Quaker women Lucretia Mott and Laura Haviland, and Henrietta Bowers Duterte, the first Black female undertaker in Philadelphia, are just a few. Many other women also worked with their husbands to operate stations. 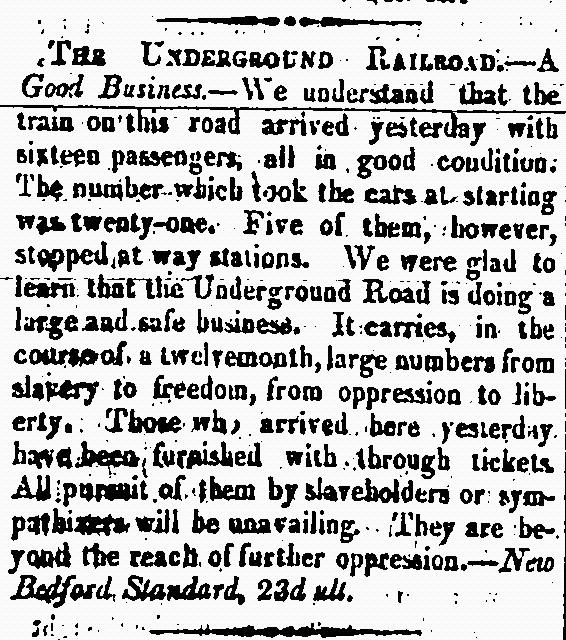 “Ticket agents” coordinated safe trips and made travel arrangements for freedom-seekers by helping them to contact station masters or conductors. Ticket agents were sometimes people who travelled for a living, perhaps as circuit preachers or doctors. This enabled them to conceal their abolitionist activities. The Belleville-born doctor Alexander Milton Ross, for instance, was an Underground Railroad agent. He used his bird watching hobby as a cover while he travelled through the South telling enslaved people about the network. He even provided them with a few simple supplies to begin their escape. People who donated money or supplies to aid in the escape of slaves were called “stockholders.”

Ways to the Promised Land

The routes that were travelled to get to freedom were called “lines.” The network of routes went through 14 Northern states and two British North American colonies — Upper Canada and Lower Canada. At the end of the line was “heaven,” or “the Promised Land,” which was free land in Canada or the Northern states. “The drinking gourd” referenced the Big Dipper constellation, which points to the North Star — a lodestar for freedom-seekers finding their way north.

The journey was very dangerous. Many made the treacherous voyage by foot. Freedom-seekers were also transported in wagons, carriages, on horses, and in some cases by train. But the Underground Railroad did not only operate over land. Passengers also travelled by boat across lakes, seas and rivers. They often travelled by night and rested during the day.

An estimated 30,000 to 40,000 freedom seekers entered Canada during the last decades of enslavement in the US. Between 1850 and 1860 alone, 15,000 to 20,000 fugitives reached the Province of Canada. It became the main terminus of the Underground Railroad. The newcomers migrated to various parts of what is now Ontario. This included Niagara Falls, Buxton,  Chatham, Owen Sound, Windsor, Sandwich (now part of Windsor), Hamilton, Brantford, London,  Oakville and Toronto. They also fled to other regions of British North America such as  New Brunswick, Quebec and Nova Scotia. After this mass migration, Black Canadians helped build strong communities and contributed to the development of the provinces in which they lived and worked.

Although out of their jurisdiction, a few bounty hunters crossed the border into Canada to pursue escaped fugitives and return them to Southern owners. The Provincial Freeman newspaper offered a detailed account of one particular case. A slave holder and his agent travelled to Chatham, Upper Canada, which was largely populated by Black persons once enslaved in the US. They were in search of a young man named Joseph Alexander. After their presence was announced, a large crowd of Black members of the community assembled outside the Royal Exchange Hotel. Alexander was among the throng of people and exchanged words with his former owner. He rejected the men’s offer of $100 to accompany them to Windsor. The crowd refused to let the men seize Alexander, and they were forced to leave town. Alexander was left to live in freedom.

The Underground Railroad operated until the 13th amendment to the US constitution banned enslavement in 1865. Freedom-seekers, free Black people and the descendants of Black Loyalists settled throughout British North America. Some lived in all-Black settlements such as the Elgin Settlement and Buxton Mission, the Queen’s Bush Settlement, and the Dawn Settlement near Dresden, Ontario, as well as Birchtown and Africville in Nova Scotia. Others chose to live in racially integrated communities in towns and cities.

During the era of the Underground Railroad, Black men and women possessed and contributed a wide range of skills and abilities. They operated various businesses such as grocery stores, boutiques and hat shops, blacksmith shops, a saw company, an ice company, livery stables, pharmacies, herbal treatment services and carpentry businesses, as well as Toronto’s first taxi company.


Black people were active in fighting for racial equality. Their communities were centres for abolitionist activities. Closer to home, they waged attacks against the prejudice and discrimination they encountered in their daily lives in Canada by finding gainful employment, securing housing, and obtaining an education for their children. Black persons were often relegated to certain jobs because of their skin colour. Many were denied the right to live in certain places due to their race. (See Residential Segregation.) Parents had to send their children to segregated schools that existed in some parts in Ontario and Nova Scotia. Through publications, conventions and other public events, such as Emancipation Day celebrations, Black communities spoke out against the racial discrimination they faced and aimed to improve society for all.

Wherever African Canadians settled in British North America, they contributed to the socio-economic growth of the communities in which they lived. In their quest for freedom, security, prosperity and human rights, early Black colonists strived to make a better life for themselves, their descendants and their fellow citizens. They left behind an enduring and rich legacy that is evident to this day.