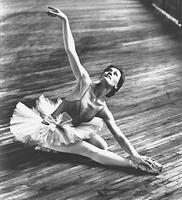 Vanessa Harwood, ballet dancer, choreographer, artistic director, teacher, actor (b at Cheltenham, Eng 14 June 1947). One of Betty OLIPHANT's first pupils in Canada, Harwood attended the NATIONAL BALLET SCHOOL, graduated into the NATIONAL BALLET OF CANADA in 1965 and became a soloist in 1967 and a principal dancer in 1970. She retired from the National Ballet in 1987, dancing the role of Swanhilda in Eric BRUHN's Coppélia.

Known for her interpretation of leading roles inSwan Lake, The Dying Swan, Coppélia and Elite Syncopations, Harwood is admired for her virtuosity and her seductive stage presence. She also has a flair for the dramatic, as seen in her performances as Myrtha in Giselle and as Dona Ana in John Neumier's Don Juan. She has danced as a guest artist with companies in the US, Australia and Europe, including the Australian Ballet, the Dutch National Ballet, the Chicago Ballet, Ballet Orlando, Georgia Ballet and Ontario's Quinte Ballet in Belleville and Ballet Markus in Oakville.

Since leaving the National Ballet, Harwood has choreographed and danced in performances of the Canadian Opera Company and Dallas Opera. She has choreographed for opera and figure skating, most notably for Tracy Wilson, and for Rob McCall's bronze medal-winning Elite Syncopations routine. Harwood directed the small, chamber ballet company, Balletto Classico, from 1989 to 1993. She made her debut as an actress in The Mousetrap at Kingston's GRAND THEATRE and has appeared in the Liza Minelli film, Stepping Out, and on television in The Road to Avonlea and Due South. She served as president of the Actor's Fund of Canada (1996-99), sits on the Executive Council for the World Dance Alliance and is a trustee of Toronto Arts (formerly the Toronto Arts Foundation).

Harwood became an Officer of the Order of Canada in 1984.