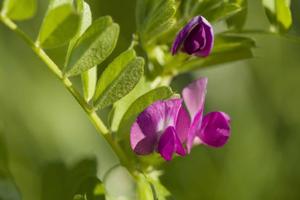 Vetch species are in the genus Vicia, which includes about 150 species native to both the Old and New Worlds, especially the Mediterranean area. Only 3 are native to Canada, although 9 or so have been introduced. Most are weak-stemmed vines with compound leaves, lavender flowers, and small seed pods that burst open readily when ripe. Some are garden ornamentals, but the most important species are grown in pastures for forage and hay. A few can produce a high-quality animal feed that compares favourably with alfalfa, and in some parts of the world vetch is an important agricultural plant. However, it is not particularly suitable for Canada as most species are adapted to warmer conditions or a longer growing season than found here. Species occasionally grown in Canada (all of foreign origin), in decreasing order of winter hardiness, are hairy vetch (V. villosa), Hungarian vetch (V. pannonica), and common vetch (V. sativa, defined to include V. angustifolia). All of these are grown in Canada as annuals, usually planted in the spring. The only winter-hardy species, hairy vetch, can be fall-planted in milder regions of Canada for an early spring crop. Common and Hungarian vetch can be grown reasonably well in parts of British Columbia, and hairy vetch to a limited extent in southernmost Ontario.

Some vetch species are considered to be significant weeds in Canada, which means that they grow in areas where farmers or others consider them undesirable. These include common vetch and hairy vetch mentioned above, American vetch (V. americana), tufted vetch (V. cracca), hedge vetch (V. sepium), and 4-seeded vetch (V. tetrasperma).

An interesting feature of vetch is the presence of nectaries on the stipules (small lobes at the base of the leaves) of many of the species. Nectaries, which furnish sweet nectar, are mostly found in flowers, in order to attract pollinators. Honeybees occasionally collect sugary liquid from the stipular nectaries, but the main visitors are ants. Apparently the ants protect the plants against caterpillars and other insects in return for being rewarded with nectar.

The legume family (Fabaceae), which includes the vetches, is known for its association with bacteria housed in root nodules. The bacteria take inert nitrogen out of the atmosphere and make it available for plant metabolism. Because it is rich in nitrogen, vetch is often grown as "green manure." The plants are simply cut up and returned to the soil in order to provide humus and needed nutrients, particularly nitrogen, for subsequent crops.