Cronenberg's film Crash shook up the Cannes Film Festival in May 1996, as Videodrome had in 1980 (courtesy Maclean's). 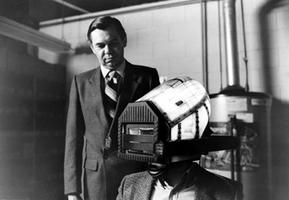 Max Renn (James Woods), part-owner of Civic TV, which broadcasts porn, is hooked on Videodrome, a TV snuff show that his technician "accidentally" zaps from the airwaves. Renn begins to have violent, sexual and murderous hallucinations. It is discovered that the program contains signals that cause brain tumours. These signals are a tertiary project of Spectacular Vision, a company that manufactures multimillion-dollar Smart Missiles for NATO even as it dispenses cheap eye-glasses for the Third World poor. From Videodrome's underground airwaves to the Cathode Ray Mission's spiritual (electronic) recharge of derelicts in private TV cubicles, David CRONENBERG's humour is at its best in this serious, sensuous and disturbing work.

From Cronenberg's original story, Network of Blood, and a screenplay that he continually revised up to the final day of shooting, the film Videodrome meditates on sadomasochism, violence and pleasure in our age. It prompted Cronenberg to articulate his view that creating art is dangerous because it involves exploring one's inner life without regard to political position or stance. Self-censoring, he claimed, is not compatible with artistic creation. Produced on a budget of less than $6 million - $500 000 of which were for the special effects designed and created by Rick Baker - the film was shot in Toronto in two months and opened in 600 theatres in North America just over a year later, on 4 February 1983. It topped the Variety box-office chart in the first week but then disappeared from the theatres.

Videodrome brought the first of three Best Director Canadian Genie awards to Cronenberg. It exists in several versions, including one which was sanitized and sold through a toll-free number. An unrated "Director's Cut" was released on tape and disc by MCA Universal Home Video.