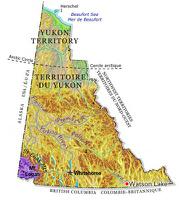 Watson Lake, Yukon, incorporated as a town in 1984, population 802 (2011c), 846 (2006c). The Town of Watson Lake is located at kilometre 1018 of the ALASKA HIGHWAY, 454 km southeast of Whitehorse. It is named after Frank Watson, a pioneer trapper and prospector who settled in the area in 1898 en route to the Klondike. During construction of the Alaska Highway, the townsite was moved 12 km from the lake to a location near the highway.

Watson Lake became an important communication centre after the construction of a major airport (1943), and remains a transportation hub, linking roads from BC with main routes to the interior and to the Northwest Territories. The town is also the centre for forestry and mining in the region. By the highway is a growing "forest" of signs of faraway places begun by a homesick soldier in 1942.