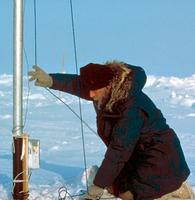 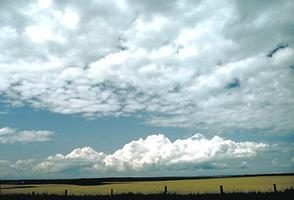 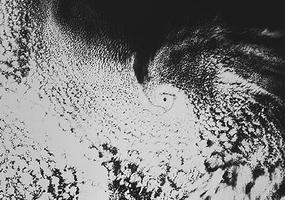 The spiral pattern caught in this satellite image is typical of the cyclonic action at the heart of severe storm systems. Canada's winter climate is dominated by cold polar air masses (courtesy Canada Centre for Remote Sensing). 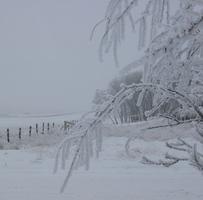 Hoarfrost is frozen dew that forms a white coating on a surface, (photo Kate Johnson).
PreviousNext

Weather in Canada ranges from the extreme cold of the Arctic to tornadoes and other severe weather in the southern regions; from the storms and fog of the Atlantic to the dry heat and majestic thunderstorms of the prairies. Weather observing in Canada is equally varied, challenging and interesting.

Weather observations are based on a definition of present weather as "state of the atmosphere with respect to heat or cold, wetness or dryness, calm or storm, clearness or cloudiness." In addition to elements implied by the definition there are also measurements needed to feed the weather forecast process.

These traditional observations are those of sky state, wind, air temperature, and the water content of the air as humidity, haze, fog and precipitation, along with their induced factors of visibility and environmental icing, all observed from the Earth's surface. The human observer can be assisted in observing the weather by an array of equipment, appropriately sited and applied. Temperature is measured by liquid in glass thermometers or electronic thermometers. Air humidity is measured with wet- and dry-bulb temperature comparisons or by hair hygrographs, or more recently with dew-point or infrared sensors. Wind speed and direction are commonly measured by rotating cup-wheels and vanes.

Precipitation is observed visually and collected in open gauges for later measurement of volume or mass. Surface air pressure, for forecast and aviation purposes, is measured by balancing the weight of air against a column of mercury, or by more recent electronic techniques using evacuated aneroid capsules. Pressure changes over the previous 3 hours are also reported for forecast purposes. More complex instrumentation supports the meteorological observer where special interests must be satisfied. Cloud heights for aviation operations were first estimated by the observer. More commonly they are now measured by a number of techniques, culminating in the laser range-finding ceilometer. Visibility is estimated by optical instruments that measure the local degree of obscuration. Icing sensors and snow accumulation sensors are still in development. Electronic thermometers infer profiles of soil temperature for the agriculturalist, who also measures solar radiation, precipitation and evaporation from soil and other surfaces.

Upper-air observations of temperature, humidity and wind as functions of height or pressure were introduced half a century ago as a service to aviation and as an aid to improving forecasts. Balloons carry instrument packages, transmitting their information to surface equipment. There are presently more than 30 installations operating twice daily spread over the entire landmass of Canada. A few also carry special instrument packages to measure ozone in the upper atmosphere. Canada has recently pioneered the use of operational upper-air systems, from the decks of commercial freighters on the N Pacific between Japan and Canada, to provide routine information over present data-sparse areas.

Remote sensing of meteorological elements is becoming more common. Weather radar has been developed to warn of severe storm developments and to estimate the precipitation falling over wide areas. There are now 13 weather radars operated by the Government of Canada over the more densely settled areas of Canada. Two more are Doppler radars which also measure the wind within storms. Experimental systems are now being engineered to sense upper-air elements remotely, either from the Earth's surface or from satellite. Powerful, vertically pointed Doppler radars are also being developed to measure the profile of upper winds.

Earth satellites have emerged as valuable meteorological observers. Early satellites flew low over the Earth in an orbit over the poles and transmitted pictures back to any receiver within operating range. These pictured the development and decay of weather systems twice a day over any area of the country. With special sensors these orbiting satellites have also been able to observe ocean temperatures, surface winds and wave height and measure the profile of atmospheric temperature above the Earth's surface. RADARSAT, a remote-sensing satellite equipped with synthetic aperture radar, provides important information about ice coverage in the Arctic; monitors ocean, water and land resources; and carries out coastal surveillance. There are hundreds of environmental measurement stations in Canada reporting through satellite to 2 centres set up to receive the satellite signals.

Network observations provide a routine base of information for many classes of users, including the forecast and climatological services of the Atmospheric Environment Services (AES), of other world services affiliated with the World Meteorological Organization, and of private meteorology in Canada and around the world. There are 350 locations where observers of the AES and air traffic services of the Dept of Transport provide hourly or more frequent observations.

Observations are provided by lake and oceangoing ships, from sites of the provincial Departments of Agriculture in Canada, from hydrological services, grain elevator companies, educational institutions and other sources. The pride of the AES is its network of more than 2000 volunteer weather observers. These observers are equipped with basic instruments to provide observations of daily maximum and minimum temperatures and precipitation and notes on the general character of the weather.

Canadian observational challenges are those associated with operating at low temperatures, both people and equipment, and with the measurement of snow and associated elements. The outdoor equipment must operate in the presence of freezing rain, rime icing and hoarfrost and down to -60°C in some areas of Canada. In unattended locations automatic weather stations must survive this cold and find a source of electrical power for their operation. Either heat is provided to take the chill off the electronics, or electronics are designed to operate at the lowest temperatures.

For power there are special batteries, perhaps buried for protection against extreme cold, and solar panels to recharge them when the long winter night is over. The measurement of snow, of visibility in falling and blowing snow, and the accumulation of snow on the ground, are challenges shared with other polar nations. Rain and snow are collected in a reservoir of glycol antifreeze and weighed automatically. In mountainous regions snow accumulations can be measured with surface mounted hydraulic snow pillows.