Bolduc’s mother, Barbara, was Ojibway (Ojibwe) from Hearst, Ontario, while his father, Joseph, was Cree from Sherbrooke, Quebec. Bolduc attended school in Chapleau as well as Jarvis Collegiate in Toronto. By joining the air force, he carried on a family tradition of military service. His father had joined the Canadian Expeditionary Force during the First World War and served in Europe with No. 1 Construction Battalion. He transferred to 1st Bridging Company in August 1918 and was sent to Egypt the next month, where he died of malaria in October.

Bolduc, who was living in Montreal at the time, joined the Royal Canadian Air Force (RCAF) on 9 June 1941 at North Bay, Ontario, for general duties. He was immediately sent to a manning depot, where he learned the basics of air force life. Three weeks later, he was posted to No. 5 (Bomber Reconnaissance) Squadron in Dartmouth, Nova Scotia. This was followed by a posting to No. 116 (Bomber Reconnaissance) Squadron in mid-August, also in Dartmouth. No. 116 Squadron flew Catalina and Canso A aircraft on anti-submarine duties on the East Coast.

Bolduc was reassigned from general duties to aircrew on 1 May 1942 and trained as an air gunner at No. 9 Bombing and Gunnery School in Mont-Joli, Quebec, from 4 July to 25 September 1942 (see British Commonwealth Air Training Plan). On graduation, he was promoted to sergeant and sailed to England in October. He underwent further operational training with Britain’s Royal Air Force (RAF), one of the thousands of RCAF airmen who served in the RAF. After training, he joined the RAF’s No. 15 Squadron in Bomber Command.

When Bolduc arrived at No. 15 Squadron, it was based at RAF Station Bourn, 11 kilometres west of Cambridge. The squadron was equipped with the Short Stirling I (Stirling Mk I), a four-engine bomber, which carried a crew of seven. In January 1943, it was replaced by the Short Stirling III (Stirling Mk III), an improved version of the original. In December, the famed Lancaster replaced the Stirling and the squadron finished the war with this bomber.

Bolduc participated in several bombing missions over German-occupied Europe as a gunner (see Second World War). He was interviewed on 28 August 1943, after a raid the previous night, which was his 17th operational trip:

The pilot had successfully evaded three fighters. We were just approaching the target when a Ju.88 [German aircraft] roared out to meet us. The skipper warned me over the intercom, but the Ju.88 went right past us. I thought maybe he would keep on going, but he didn’t. He turned in a big sweep about 1,000 yards away and came right for us. When he was about 500 yards away, I opened up. He never got a burst in but I kept giving it to him. I must have let him have about 500 rounds. He started to falter and then went straight down. We watched him go and he hit the deck with a terrific bang.

For this and other actions as a rear gunner, Bolduc was awarded the Distinguished Flying Cross (DFC). The citation for his award reads:

Pilot Officer Bolduc [he was commissioned on 2 May 1944] has taken part in many operational sorties including attacks on such important and strongly defended targets as Berlin, Hamburg and Essen. In June 1943, while over Cologne, his aircraft was attacked by an enemy fighter. This officer’s accurate fire damaged the enemy aircraft which broke off the attack and was probably destroyed. Another time during a sortie against Nuremburg his aircraft was attacked by a Junkers 88. While making the bombing run Pilot Officer Bolduc opened fire and the enemy fighter fell to the ground in flames. At all times this air gunner has set an inspiring example by his keenness and devotion to duty. 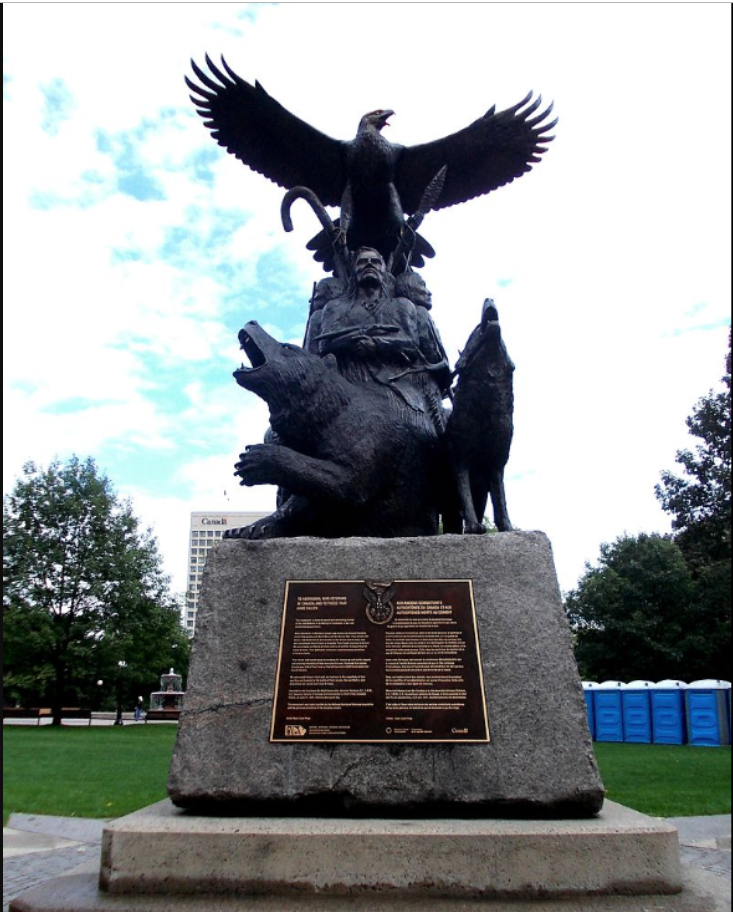 Monument dedicated to Indigenous soldiers like Willard Bolduc who fought in the First World War and Second World War for Canada.

Drinks and Dinner with the King

Bolduc received his Distinguished Flying Cross (DFC) from King George VI. Rather than going to Buckingham Palace to receive his medal, the King and Queen came to Bourn for the presentation on 5 July 1944. He was also promoted to flying officer that day. In a letter to his mother, Bolduc told her she could now address “my mail to F.O. Bolduc, D.F.C.” and added, “I never knew I would ever have letters after my name — it makes you feel sort of important.”

Bolduc described the ceremony in his letter. “We had a full parade and I had to march out by myself in front of everyone and the King shook hands with me and pinned on the medal.” After the parade, the King and Queen joined Bolduc and the other medal recipients for a chicken dinner. Bolduc noted, “Before dinner we all had a drink of Scotch in the anteroom with [the King], so now I can say I had a drink of Scotch with the King of England!” At the end of his letter he admitted “I was really scared stiff. I could hardly talk and my knees were knocking and everything else. I guess you can say your crazy son is really getting around, eh Mom?”

Bolduc participated in several more missions and came through the war unscathed, a rarity for bomber crews. Only 24 per cent avoided death, serious injury or capture. Of the approximately 50,000 Canadians who served in Bomber Command, about 10,000 died on operations, during training or as prisoners of war (see Royal Canadian Air Force and Second World War). 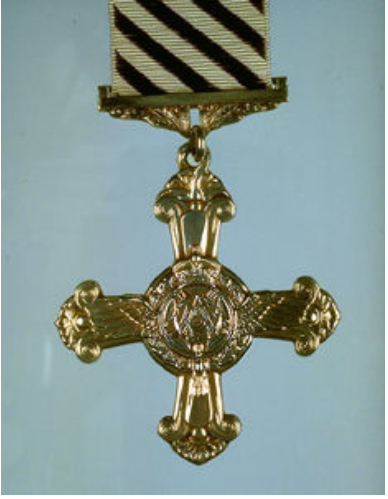 This medal was awarded to members of the air force for bravery. Flying Officer Willard Bolduc was awarded the DFC in 1944 from King George VI (courtesy Library and Archives Canada).

Once Bolduc completed his operational tour of duty (normally 30 combat sorties), he was repatriated to Canada in November 1944 and released from military service in March 1945. He worked in various occupations in Toronto and died in hospital in that city after a short illness in 1968. He is buried in Chapleau, ON. Bolduc’s name is inscribed on an honour roll in St. John’s Anglican Church in Chapleau, listing the Second World War volunteers from the congregation.