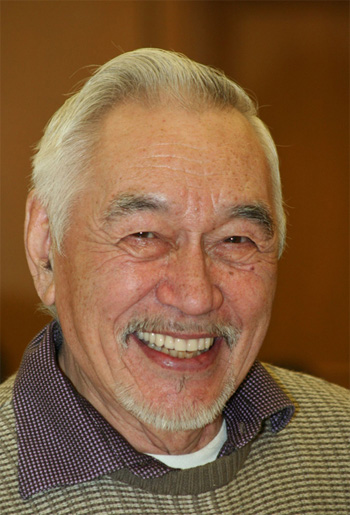 Willie Adams was the first Inuit senator in Canada. He was actively involved in the creation of Nunavut and supported Inuit language rights, art and culture, and traditional hunting methods such as sealing. Adamswas featured in “The Awareness Series,” an exhibitionby Inuk artist Barry Pottle.
(photo courtesy Barry Pottle)

Willie Adams was born in Fort Chimo (now Kuujjuaq), the largest northern village in Nunavik, Quebec. His mother, Lizzie Adams, was Inuit. Willie had two sisters and was educated at Anglican mission schools in northern Quebec.

Willie’s non-Inuit father, Newfoundlander Nelson Adams, lived in the north for five years as a Hudson’s Bay Company (HBC) manager (1931–36). When Nelson left the area, he was unaware that he had fathered a son. He later settled in New Brunswick. Willie Adams did not know his father and always assumed that he was dead, but in 1997, the two met in Fredericton.

In 1977, Prime Minister Pierre Trudeau decided that the Inuit should be represented by an Inuk senator. Willie Adams was interviewed as a potential candidate. Adams later remarked that he had little interest in the position until he learned that a senator’s annual salary (then about $60,000) was over four times what he earned as an electrician.

On the advice of Trudeau, Governor General Jules Léger appointed Adams as a Liberal senator in April 1977. He served as deputy chair of the special senate committee on transportation safety and as a member of three senate standing committees: transport and communications; energy, the environment and natural resources; and fisheries and oceans. Adams was also an ex-officio member of a senate task force on the Meech Lake Accord and travelled with the group throughout the North, hosting public meetings about the proposed agreement.

Adams was a strong advocate for the Inuit in the Senate. In 1995, he voted against the Liberal party’s firearms bill because it clashed with the subsistence hunting needs of the Inuit. He also resigned from the standing Senate committee on Aboriginal peoples over this issue.

Adams passionately supported the Nunavut land claims agreement and hosted a briefing session for senators to address related concerns. He was actively involved in the creation of Nunavut as a territory and in 1999 became the region’s first senator.

He spoke passionately about the challenges and opportunities caused by mineral exploration and development in their homeland. Repeatedly, he outlined the impact of climate change and environmental degradation on his people’s livelihood and traditions. Adams also advocated for hiring policies that included Indigenous people at all levels of government.

Adams travelled extensively to promote Inuit art and culture. At official openings of art exhibitions, he has delivered speeches outlining the history of the Inuit and Inuit culture. He also donated a sculpture of an inuksuk by Inuit artist Ernie Kadloo to to the Senate. The sculpture stood in the Aboriginal Peoples Committee Room in Parliament’s Centre Block (it is currently displayed at the Senate of Canada Building, while Centre Block is being renovated).

Adams left the Senate in 2009, after reaching the mandatory retirement age of 75. At the time, he was the Senate’s longest-serving current member.

DID YOU KNOW?
Between the 1940s and 1980s, the federal government issued metal identification tags to Inuit. Adams was tag number E8-73. He was featured, with his photo and tag number, in an exhibition highlighting Inuit based in Ottawa. The show, “The Awareness Series,” by Inuk artist Barry Pottle, was featured at venues across the country, including Felehey Fine Arts, a Toronto gallery of Inuit art, in 2016 and the Art Gallery of Hamilton in 2017/2018.

Willie Adams was a father to 10 children, Mary Jane, Jesse, Harry, David (who died in September 1983), Jimmy, Christine, Willie, Lizzy, Victoria and Isaac. His youngest son, Isaac, is his child with his wife Mary, whom he married in the late 1970s. Adams has several grandchildren and great-grandchildren.