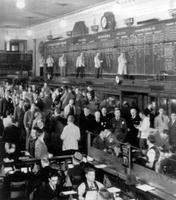 The wheat glut of 1928 threw the Winnipeg Grain Exchange into a spiral, triggering a depression in Canada's economy (courtesy PAA/A-3742).

The Winnipeg Commodity Exchange (WCE) was established in 1887 as the Winnipeg Grain Exchange - the name was changed in 1972 - by western farmers and grain merchants to provide a marketplace for the expanding agricultural production of the Canadian prairies. For its first 18 years, the WCE operated strictly as a cash market, ie, a marketplace for grains that have already been grown (as distinct from a "futures market" in which contracts are traded for the delivery of grain at a later date). In this capacity, WCE provides meeting rooms, communications facilities and rules of trade for the grain and produce grown in the West.

The WCE is the only agricultural commodities exchange and futures market in Canada. A voluntary, nonprofit, unincorporated association, its 330 members (farmers, elevator companies, grain processors' merchandisers, exporters, overseas importers and the general public) represent virtually every group with an interest in Canadian grains. The Canadian Wheat Board is also a member.

The futures markets of the WCE are used by the grain industry for price protection and price discovery. Through the process known as "hedging," producers, handlers and users of grain buy and sell futures contracts to protect themselves against the possibility that prices will change. They trade in an open, competitive auction on the trading floor in Winnipeg, trying to obtain the best price they can for the grain they own or the grain they need to buy later. The market prices established through this process are used throughout the grain industry (see Grain Handling And Marketing).

Publications of the WCE include The Winnipeg Commodity Exchange, booklets on each of the futures contracts, Using the Grain Markets, The Winnipeg Gold & Silver Markets and The Interest Rate Futures Markets.