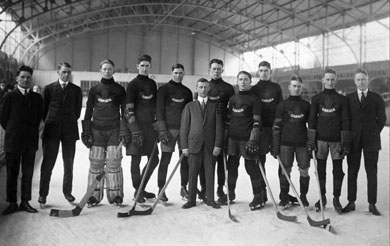 The Winnipeg Falcons was a hockey team of the early 20th century that was made up almost solely of players of Icelandic heritage. In 1920, they won Olympic gold in Antwerp, Belgium, in the first Olympic hockey tournament. Although some sources have identified the Toronto Granites as the first Canadian Olympic hockey team to win gold (at the 1924 Olympic Winter Games), Hockey Canada and the Canadian Olympic Hall of Fame now recognize the Falcons as the first Canadians (and the first team ever) to win Olympic gold in the sport. In addition to the commendations that went with the first-ever Olympic gold medal in hockey, the triumph of the 1920 Winnipeg Falcons is a story of perseverance over adversity and underdogs beating long odds.

Creation of the Falcons

In the beginning, the Falcons Hockey Club was an amalgamation of two rival Manitoba teams made up almost solely of players of Icelandic heritage, players who loved their sport but were discriminated against because of their immigrant background and were not allowed to participate in the mainstream leagues of the Winnipeg region.

In the late 1890s, the Vikings and the Icelandic Athletic Club created their own opportunities and became heated rivals in hockey competition (as in other sports). Attrition among the clubs’ players, however, caused the rivalry to cool and led the two sides to combine, forming the Falcons in around 1910. 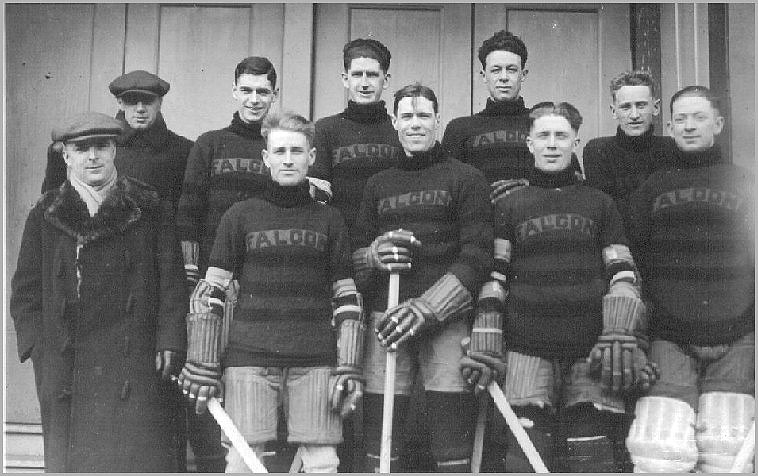 The Falcons joined the Monarchs, Winnipegs, Kenora and Brandon to form the Manitoba Independent League, an intermediate league. Early success was difficult, but by 1912–13, two eventual Olympic heroes, Konnie Johannesson and Frank Fredrickson, were among the club’s young recruits.

The team improved to win the independent league’s title in 1915 and finally achieved one of its long-sought goals — to join the city leagues — when it was admitted to the B section of the Winnipeg Senior League.

Many players from the local leagues, including the Falcons, served their country in the First World War. The conflict caused heartache for families far and wide; two early Falcons lost their lives for their country: Frank “Buster” Thorsteinson and George Cumbers. (See also Frank Thorsteinson and the Winnipeg Falcons at War.)

When the war was over, the main Falcons team was re-assembled — Johannesson, Fredrickson, Bobby Benson, goalie Wally Byron, trainer Gordon Sigurjonsson and team president Hebbie Axford were among the team members who returned from service overseas. In the 1919–20 season, the team was accepted into Winnipeg’s senior hockey league, in a division that included Selkirk and Brandon.

The team was focused that season and under coach Fred "Steamer" Maxwell, they emerged as the Manitoba League champions after a legendary struggle against the Selkirk Fishermen. The championship series was won 11–6, the second game a double-overtime classic at the old Amphitheatre arena that saw the Falcons rally from a 5–1 deficit to win the game 6–5 on a sudden-death goal by Slim Halderson.

Next, the Falcons prevailed over the Fort William Maple Leafs to claim the Western Hockey championship. And in an unexpectedly easy romp, they defeated the favoured University of Toronto club 11–5 in a two-game series to win the Allan Cup and qualify as Canada’s Olympic entry to the Games in Antwerp, Belgium. 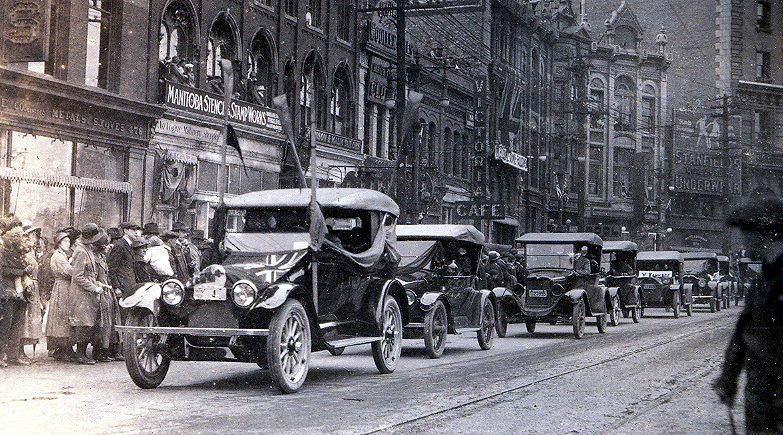 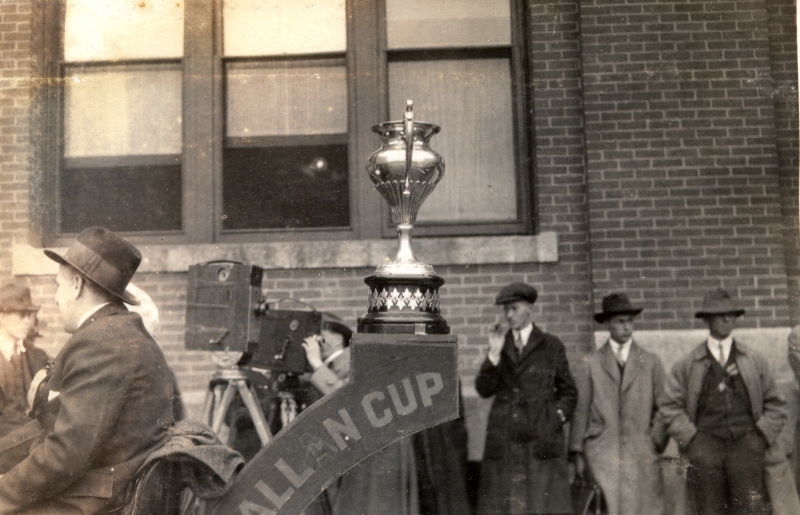 In late April 1920, the Falcons were big favourites and didn’t disappoint, rolling up a tally of 29–1 as they skated to the gold. This included a 15–0 win over Czechoslovakia, a hard-fought 2–0 win over the United States and a 12–1 decision over Sweden that completed the single-knockout tournament. In a show of sportsmanship, the Falcons gave their sticks to the Swedish team as a memento.

The victories and gold medal were huge events across the country, if the newspapers of the day are any indication. The Toronto Globe, for example, reported not only on the Olympic victory, but also on the Falcons’ earlier success in the Western Hockey championship and the Allan Cup. A Globe reporter likened their Olympic performance to the “gallantry of Canadian troops on Belgian soil in the defense of Ypres in the Great War” (27 April 1920). When the victory was announced in the House of Commons, the “entire House” responded with “enthusiastic applause” (Globe, 27 April 1920). On 17 May, the team met with a “rousing, warm-hearted welcome” from officials, dignitaries, and a crowd of at least 2,000 people in Toronto, one of their stops on the way home (Globe, 17 and 18 May 1920). 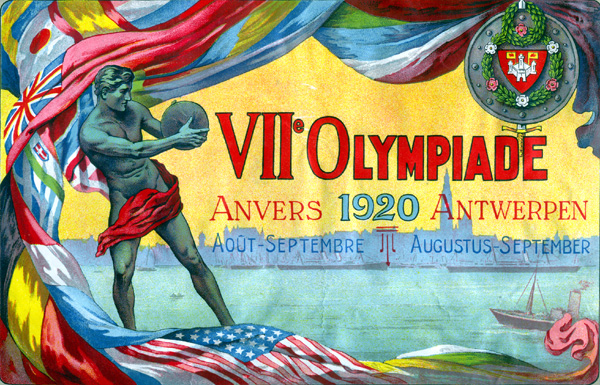 Upon the team’s return to Winnipeg in May, there was a mile-long parade of more than 200 cars, trucks and horse-drawn vehicles, the Manitoba Free Press noted, and the city proclaimed a half-day holiday to celebrate the return of the champions. On 22 May 1920, a packed civic banquet was staged in their honour at the Fort Garry Hotel, where the city presented the team with gold watches.

The 25 May 1920 edition of the Manitoba Free Press also reported that C.C. Robinson, western trustee of the Allan Cup, toasted the Falcons and their quick rise to supremacy. The paper reported that Robinson had said he and other “hockey moguls” had to “apologize for the indifference with which they had first regarded the Falcons [and that] this wonderful team had placed Winnipeg at the top of the cities of Canada and had helped make Canada known among nations.”

The article also noted that Winnipeg’s Icelandic people were exceptionally proud of the Falcons’ achievements, noting that the parents of almost all the players had come from Iceland to settle in the area in the previous 45 years and that the “champions of the seventh Olympiad” had all been born in and around Winnipeg. Team members, said the article, told their fans that that their proudest moment after the gold-medal win was their welcome home by Winnipeggers. 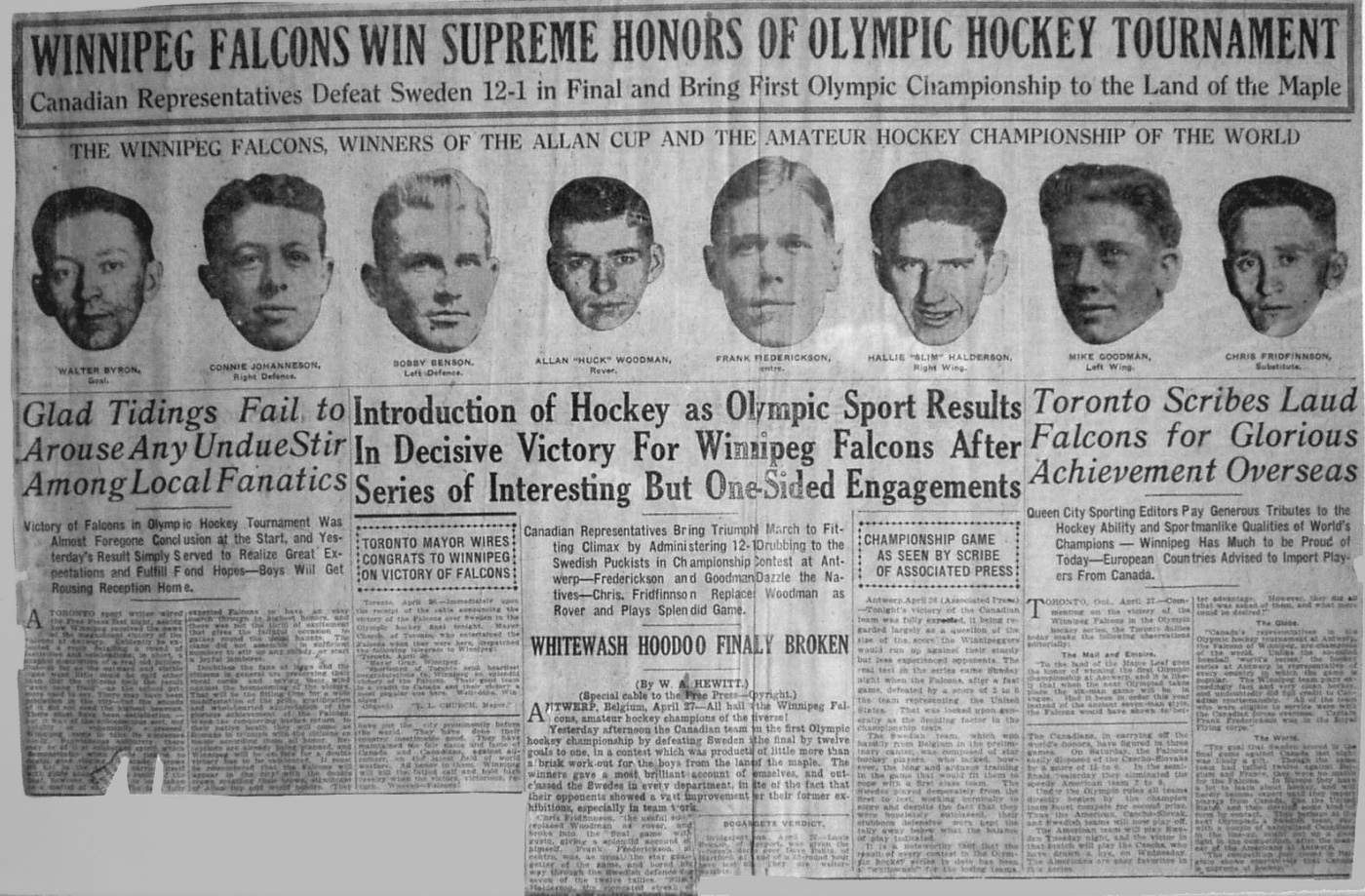 After the dream year, the Falcons were in high demand by professional teams across the country. The club’s junior squad, the Junior Falcons, captured the Memorial Cup the next year (1921).

However, over time, the victory and the stories faded from the collective memory as the players moved on and eventually passed away.

Few Canadians remembered or recognized the Falcons’ victory at the Olympic Games of 1920 — until, that is, the decision by Hockey Canada to honour Canada’s Olympic Hockey Heritage for the 2002 Games in Salt Lake City.

It was a fine idea, except for the fact that Hockey Canada had decided to honour the 1924 Toronto Granites as the first Olympic gold medallists. At the time, the common perception was that the gold won by the Falcons did not really count, as many thought that hockey was just a demonstration sport at the 1920 Olympic Games. This misconception may be due to the fact that the first Olympic Winter Games were not held until 1924; many have therefore assumed that the 1920 hockey tournament was only a demonstration sport. However, the 1920 Olympic Summer Games included official events in both figure skating and hockey. 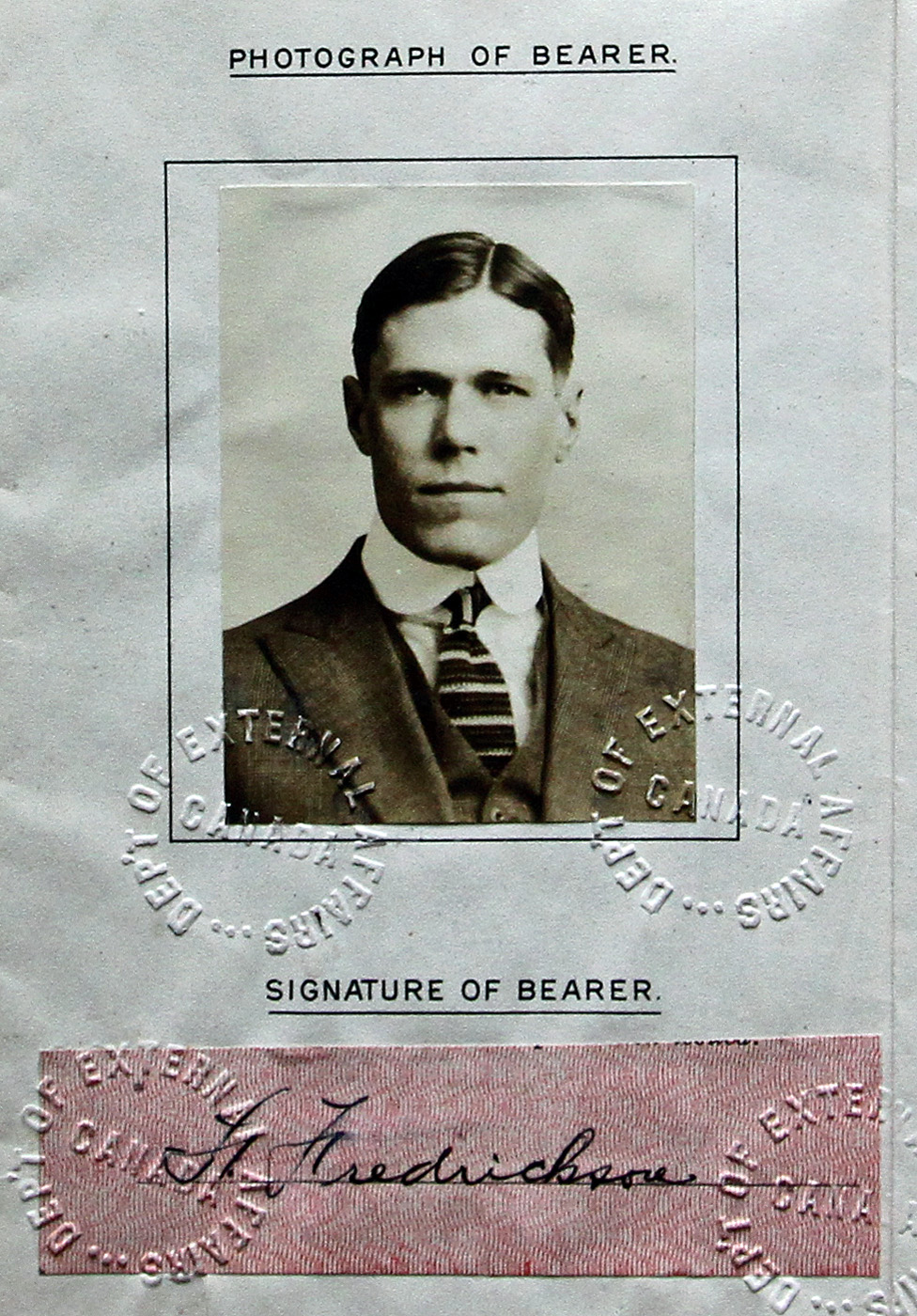 Although Hockey Canada assumed that the 1920 tournament was not an official Olympic event, others were working to honour the Falcons’ victory, including the Falcons Forever committee whose goal is to rediscover, celebrate and spread the story. Similarly, Konnie Johannesson’s son Brian, a computer programmer and designer, began the richly documented www.winnipegfalcons.com in 1999.

Their efforts, combined with a public outcry from others familiar with the Falcons’ story, eventually convinced Hockey Canada of its mistake.

“I remember one woman in Gimli [Manitoba] got very upset about it, [and] told everyone [that] what was happening was just nonsense and that they had better get their facts straight,” said Dan Johnson of the Falcons Forever committee. “I think Hockey Canada was caught off guard by it all but they came on board quickly and made the correct adjustments. This brought the Falcons back into the limelight, which was terrific because they were ignored for so long.” 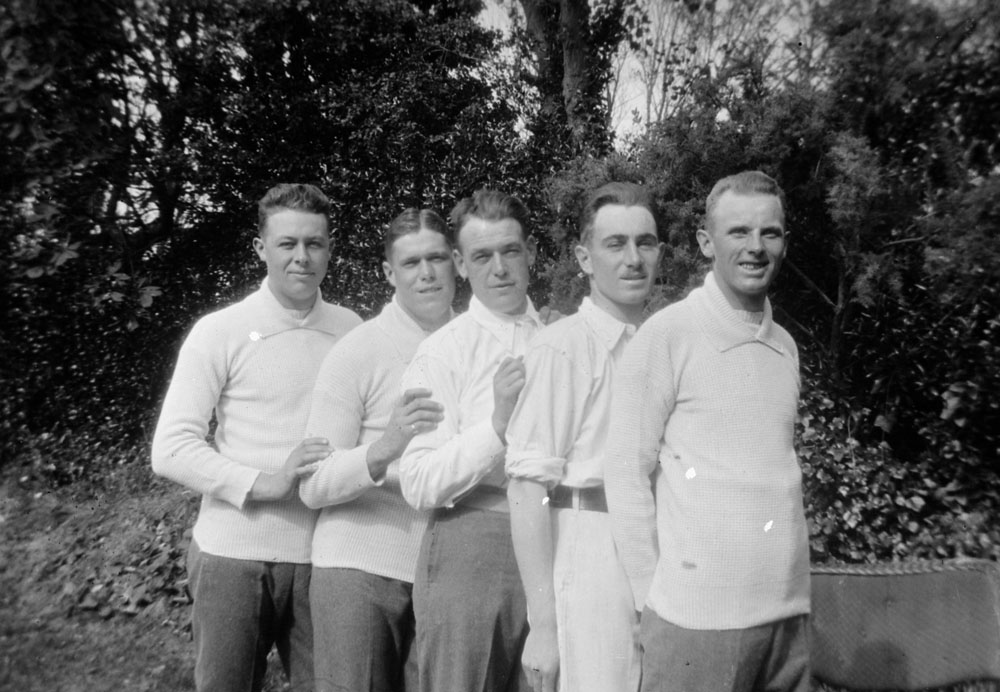 Johannesson praised Hockey Canada officials for reacting quickly. “Bob Nicholson [then Hockey Canada president] was so very co-operative. I sent him a couple of emails and got very nice replies; he realized that somebody had blundered and he was going to fix it.”

In addition to Hockey Canada, other organizations have recognized the Falcons’ victory. The Falcons were inducted into the Canadian Olympic Committee Hall of Fame in 2006, and a new display honouring the 1920 gold medallists is housed in the main concourse of Winnipeg’s MTS Centre, home of the NHL’s Winnipeg Jets. The Hockey Hall of Fame, the game’s shrine in downtown Toronto, has also upgraded their coverage of the Falcons, from a small 8-by-10 inch photo of the Falcons to a larger display that includes Konnie Johannesson’s actual jersey, his gold medal and a pair of his skates. 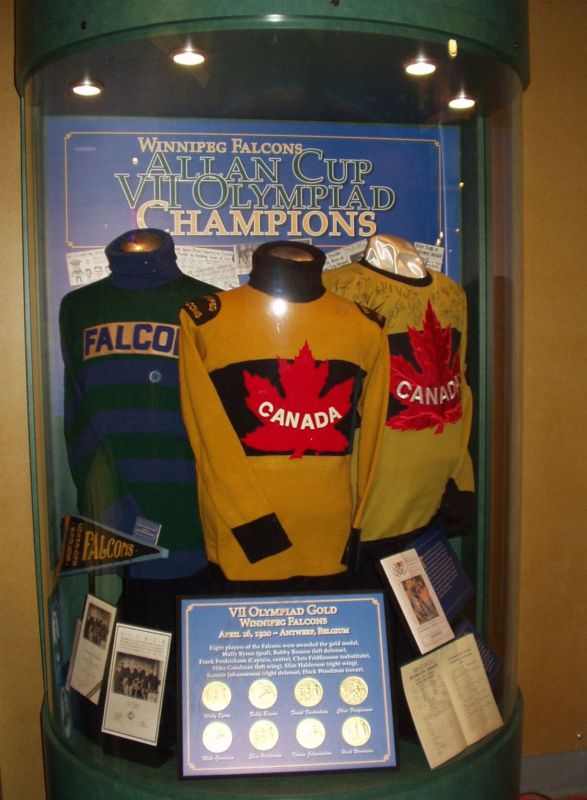 The Winnipeg Falcons exhibit at the MTS Centre. Credit: winnipegfalcon.com\r\n

“Our history isn’t well known — very little about these fellows and what they went through to get where they did,” said Dan Johnson, a long-time member of the Falcons Forever committee. Johnson was born in the Icelandic community of Gimli, Manitoba, and later moved to Winnipeg.

“It wasn’t easy for them,” Johnson said. “But there’s ... a terrific sense of pride about their story. Like a lot of immigrant groups, their language and their culture and their activities were private affairs. But one of their main objectives was to be Canadians.”

Note: Dan Johnson and Brian Johannesson were interviewed by the author in 2012.