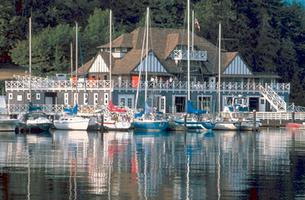 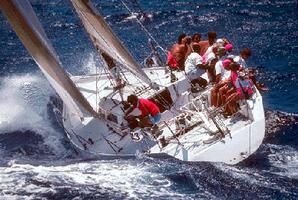 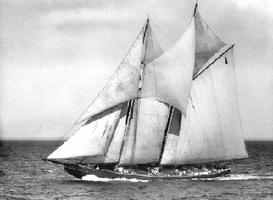 Yachting refers to races of watercraft using sail power only. Competitors are required to complete a prescribed course in the shortest possible time, passing marker buoys in the correct order and on the correct side. It is believed that the sport has Dutch origins. It was introduced to England by Charles II following his exile in Holland and the word itself comes from the Dutch jaght. Although the first recorded race took place in 1610, the International Yacht Racing Union, which governs the sport in the world, was not formed until 1906.

Yachting competition takes place with a wide variety of sailing craft and under quite varied conditions. Races are organized for the smallest of dinghies on lake courses and for oceangoing vessels with substantial crews taking several days to complete the course. Olympic yachting, however, is confined to 7 classes (and beginning in 1992 a sail-board class, the Lechner): Tornado, catamarans crewed by 2 people; Flying Dutchman, centreboard dinghies weighing 174 kg with spinnakers and a crew of 2; 470, the same as Flying Dutchman, but the boat weighing 188 kg; soling, a keel yacht with a 3-man crew; Finn, one person sailing a centre-board dinghy; Europe, a smaller single-person centre-board dinghy for women; and Star, keel yachts with a 2-man crew. There are 7 races in each class and competitors record their 6 best results. The sailor or crew with the lowest number of points is the winner, since a first-place finish earns zero points - points being accumulated on a graduated scale for less favourable placings.

In Canada, yachting traces its origins to Kingston, Halifax and Toronto. The Kingston Boat Club was formed in 1826, but with the establishment of the Halifax Yacht Club in 1837 (which became the Royal Nova Scotia Yacht Squadron after a visit by the Prince of Wales in 1861) came the founding of the country's oldest continuous club in the sport. In 1854 the Royal Canadian Yacht Club was formed in Toronto, and by 1892 the sport had spread across Canada with the founding of the Royal Victoria Yacht Club. Three years later, the Canada Cup races were established as a perpetual challenge series between yachts from Canada and the US on the Great Lakes.

Although the Canada Cup has generally been won by the Americans, more recent years have brought Canadian domination, starting with the win by Evergreen in 1978. One of the most glorious chapters in Canadian yachting was written by the Bluenose out of Lunenburg, NS, which dominated the races for the Halifax Herald's International Fisherman's Trophy from 1921 until her retirement in 1938.

Besides the Bluenose, Canadians have enjoyed many other international successes in yachting. Canadian sailors won Olympic silver and bronze medals in 1936 and a bronze medal in the soling class in 1972. 1984 was Canada's best Olympic performance with 3 medals, a silver in Flying Dutchman and bronzes in both Finn and Soling. Frank McLaughlin and John Millen won bronze in 1988 in the Flying Dutchman, and in 1992 Ross MacDonald and Eric Jesperson crewed their way to bronze in Star. In 1959 Walter Windeyer of Toronto won the world Dragon Class championship. Canada did not win an Olympic yachting medal in 1996, the first time it has not won one since the 1976 Olympics.

Much attention was focused on Canada's unsuccessful challenge (1983) for the prestigious America's Cup for 12 m yachts - a natural interest for a nation bounded by 2 great oceans with thousands of freshwater lakes in between. In the 1987 Pan-Am Games Canada won medals in 5 out of 6 classes, including one tie for gold with the US in the star class.