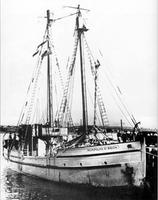 Henry Asbjorn Larsen, mounted policeman, seaman, explorer (b at Hvaler, Norway 30 Sept 1899; d at Vancouver 29 Oct 1964). He went to sea in a square-rigger at 15; inspired by the career of his countryman Roald AMUNDSEN, he dreamed of exploring the Arctic. After a voyage to the Beaufort Sea he became a Canadian citizen in 1927, and in 1928 joined the Royal Canadian Mounted Police.

He was assigned as first mate to RCMP schooner ST. ROCH on her maiden voyage to the western Arctic in 1928; later that year he was made skipper, a position he retained until 1948. Under Larsen, called by the Inuit "Hanorie Umiarjuag" or "Henry with the Big Ship," the St. Roch patrolled the Canadian Arctic coast, often wintering in the North. The first ship to traverse the NORTHWEST PASSAGE from west to east (1940-42), it was the first to make the passage in both directions (1944); later it was the first ship to circumnavigate North America (1950). Larsen retired with the rank of superintendent in 1961.