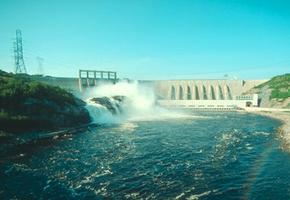 The Rivière Manicouagan, 560 km long, rises in east-central Québec near the Labrador border and flows south through the Réservoir Manicouagan to the St Lawrence River near Baie-Comeau. It drains a rugged, heavily forested watershed of 45 800 km2, and has been an important artery for moving logs south to supply pulp and paper mills at its mouth. Several hydroelectric power plants (Manic 1, completed 1967, 184 MW; Manic 2, completed 1967, originally 1015 MW, now 1145 MW; Manic 3, completed 1976, 1183 MW, now 1244 MW; Manic 5, completed 1971, originally 1292 MW, now 1596 MW; and Manic 5AC completed 1990, 1064 MW) have harnessed the river's power, some of which is carried under the St Lawrence by a submarine cable to the Gaspé area. The name may come from a Montagnais word meaning "where there is bark" (ie, for making canoes).