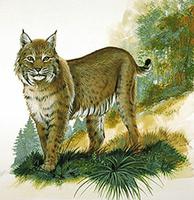 The bobcat is distinguished from the similar Canada lynx by its tuftless ears and bobbed tail (artwork by Jan Sovak, 1989). 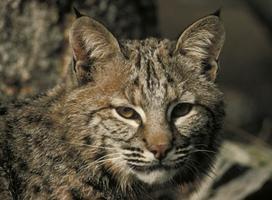 Bobcats have a more southern distribution and occupy a wider range of habitats than lynx (Corel Pofessional Photos). 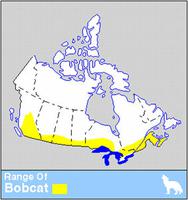 The bobcat (Felis rufus, family Felidae) is a medium-sized, carnivorous mammal, also known as wildcat or bay lynx. It is distinguished from the similar Canada lynx by its relatively small feet, ears tuftless or with very short tufts, and bobbed tail, with a white-tipped underside. The coat is of one colour or spotted; fur behind the jaws and elsewhere is shorter than in lynx. Colours, more varied than in lynx, range from light grey to reddish brown. Bobcats vary greatly in size (5-18 kg), males being larger than females.

Bobcats have a more southern distribution and occupy a wider range of habitats than lynx. They spread into parts of southern Canada following European land clearing and settlement. Bobcats and lynx coexist in spruce-pine forests of northern and southwestern Ontario, southern Québec, New Brunswick and Nova Scotia.

The chief prey of bobcats is hares, but other small mammals, birds and, occasionally, even deer are eaten.

Like lynx, bobcats breed in late February to early March. They have a 60-day gestation period, and bear 1-4 young. Newborn kittens weigh 285-370 g, are spotted with strong facial markings, and are cared for by both parents. Life span is about 10 years. 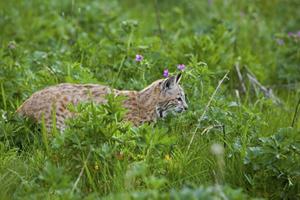 Bobcat fur is less valuable than that of lynx. Bobcats may purr or mew but, unlike lynx, cannot be tamed.