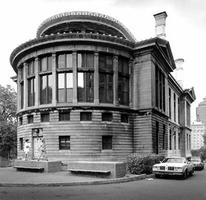 Alexander Cowper Hutchison, architect (b at Montréal 2 Apr 1838; d there 1 Jan 1922). One of Victorian Montréal's most prolific and prestigious architects, he epitomized the generation of native-born, self-taught men who shaped the city during the second half of the 19th century. Trained as a stonemason, he supervised the cut-stone work on Montréal's Christ Church Cathedral and the East Block of the Parliament Buildings, Ottawa, before establishing a private practice in Montréal shortly after 1865. The firm was known until 1890 as Hutchison and Steele, thereafter as Hutchison and Wood.

Hutchison deserves credit for the careful detailing that characterizes all of the firm's output, including the Redpath Museum, testimony no doubt to his apprentice years as a craftsman-builder. Hutchison and Steele gained international reputation as ice-palace designers.