Although Alexander Graham Bell  is most famously credited as the inventor of the telephone, he also coached what was arguably the world’s most advanced aviation team of the early 20th century. By the time Bell’s team won the Scientific American Trophy on 4 July 1908, they had already accomplished more in just seven months than the Wright brothers did in seven years, establishing innovative flight technologies that continue to be fundamental to aircraft design. Bell's well-known Silver Dart was only one of his team's many experimental aircraft. First as the Aerial Experiment Association and then the Canadian Aerodrome Company, the team developed and tested over 20 flying machines, introducing ground-breaking new aviation technologies, under Bell’s guidance and leadership from the fall of 1907 to the spring of 1910.

Aviation was a calling for Bell. The reputation and wealth he had amassed from the telephone would have satisfied most people, but he was passionate about flight and devoted much of his time, energy and money to its pursuit. In fact, Thomas A. Watson, his aide in the invention of the telephone, believed Bell would have preferred to focus on aviation before telecommunications. An independent thinker, Bell staunchly supported aviation at a time when many thought it unrealistic and a risk to his scientific reputation.

On 26 September 1908, the day after AEA team member Thomas Selfridge’s funeral, Bell addressed the general public in Washington, DC,capturing the spirit of early aircraft pioneers: “We breathed an atmosphere of aviation from morning till night and almost from night to morning. Each felt the stimulation of the discussion with others, and each developed ideas of his own upon the subject of aviation, which were discussed by all.” While modern factory aircraft production has lost much of this excitement, Bell’s words could apply to today’s recreational aircraft homebuilder enthusiasts.

Bell’s aviation career spanned three decades and over 1,200 experiments, mostly on his estate at Beinn Bhreagh in Baddeck, Nova Scotia. Initially, he focused on the tetrahedral kite, which successfully carried a man in the air. Bell was well aware of the risks associated with flying and decided kites were the safest way to conduct long-term studies. Successful aviation pioneers had to be intelligent, cautious and courageous — in that order. As Bell wrote in his personal notebook on 2 September 1901: “The great difficulty in developing an art of aerial locomotion lies…in the difficulty of profiting by past experience…a dead man tells no tales.”

Bell cofounded the Aerial Experiment Association (AEA) with his wife, Mabel, in the fall of 1907. This dynamic team consisted of six people, including Mabel, the first woman in history to propose, establish and fund a research group. Frederick W. “Casey” Baldwin and Douglas McCurdy, highly trained engineers from the University of Toronto, were two of Bell's Canadian recruits. Lieutenant Thomas Selfridge, an American military observer studying aviation, was dispatched to join Bell’s team in Baddeck and assist with experiments. American motorcycle engine manufacturer Glenn Curtiss rounded out the team by supplying much-needed engines, allowing them to conduct powered flights. This blend of skills, personalities and energies fuelled the most productive team of international aviation pioneers ever to challenge the more publicized Wright brothers. The AEA was the first to publicly break flying records already claimed to have been set by the Wright brothers in secrecy, causing the Wright brothers to recognize Bell's team as serious competition.

Through the AEA, Bell conducted a passenger-carrying flight with his massive Cygnet I tetrahedral kite. Launched on Baddeck Bay on 6 December 1907, the Cygnet carried Lieutenant Selfridge up to 168 feet (51.2 m) above sea level. At the urging of the younger AEA members, Bell transitioned to more traditional aircraft designs being tested throughout the world at that time. In the Bell aviation camp, the transition from gliders to powered flight was quick compared to most pioneer efforts, taking mere months.

The Transition to Powered Flight

In the winter the team relocated to Hammondsport, New York, which enjoyed milder weather than Beinn Bhreagh and was close to Curtiss’s engine factory. After approximately 50 successful glider flights in Hammondsport, the AEA flew four powered aeroplanes, one each designed by Selfridge, Baldwin, Curtiss and McCurdy. The first of these, the Red Wing, got them into the air twice, flying a distance of 319 feet (97.2 m) on its longest flight. The second, the White Wing, only completed five flights before it crashed and was destroyed beyond repair. However, it proved to have much more lateral control through the use of ailerons (hinged flight control surfaces on the trailing edges of the wings), which was a promising advancement. It also sported a tricycle undercarriage, which improved takeoff flexibility.

The third powered aircraft, the June Bug, marked the introduction of doped (lacquered) fabric wings to increase lift. With its less porous wings, the June Bug was capable of longer flights. In 1908, it won the Scientific American Cup for the first official flight over 1 km.

The fourth powered aircraft, the Silver Dart, incorporated all of these refinements. However, the team recognized that a more powerful engine was required, which Curtiss provided. They improved the wing skin covering again, this time using a rubberized silk balloon cloth (used on hot air balloons), making it more durable than any of its predecessors. Built and tested in Hammondsport, New York, the Silver Dart was dismantled and shipped to Bell’s estate in early 1909. On 23 February, it became the first powered, heavier-than-air craft to fly in Canada. 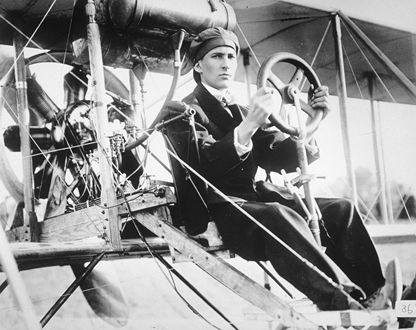 J.A.D. McCurdy flew the Silver Dart in Baddeck, Nova Scotia on 23 February 1909, the first flight of an aircraft in Canada 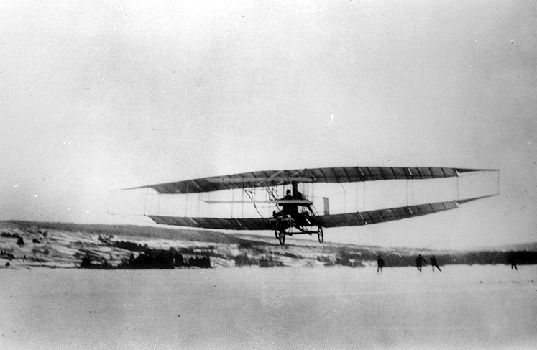 Tragically, Thomas Selfridge died in 1908 in an accident unrelated to Bell’s experiments, killed while a passenger on a demonstration flight conducted for the US Army and piloted by Orville Wright. (After the accident, Bell forbade the carrying of passengers during test flights.) In March 1909, Glenn Curtiss departed to found a major aircraft manufacturing operation in the United States, and the AEA dissolved. The remaining members of the AEA, Baldwin and McCurdy, formed the Canadian Aerodrome Company (CAC) in 1909, with Bell providing guidance and financial support. This first Canadian aircraft company was based at Bell’s estate of Beinn Bhreagh.

Baldwin and McCurdy conducted the most advanced aviation research to that point, accurately measuring aircraft ground speeds and producing engine performance charts, and determining engine power and fuel requirements at higher altitudes. They determined that more altitude resulted in higher airspeeds and required pilot oxygen, and that Atlantic crossings were possible at higher altitudes due to faster speeds and lower fuel consumptions. Baldwin saw the need for variable pitch propellers to accommodate changing performance requirements during different stages of flight.

The CAC obtained the Canadian patents to the Silver Dart and made a number of modifications, leading to the design and production of the Baddeck No. I at Bell’s estate in Baddeck. It was the first aircraft to be designed and built in Canada. The company also produced the Baddeck No. II as well as the Hubbard monoplane. Commissioned by Gardiner Greene Hubbard II of Boston, Mabel Bell’s cousin, the Hubbard was the first airplane exported from Canada.

The CAC saw an opportunity to sell aircraft to the government and conducted demo flights for the military at the Petawawa Army Camp with the Dart and Baddeck No. I. Yet in spite of a concerted sales pitch to the government and a powerful lobby mounted by some key figures in Ottawa, including Governor General Earl Grey; Major G.S. Maunsell, the Director of Engineering Services; and Colonel R.W. Rutherford, the Master-General of the Ordnance for Canada, the government would not support the CAC.

In 1910, few politicians recognized the value of the aeroplane as part of the future. Finding a market for this new product proved to be another big challenge for pioneer aviation manufacturers. However, the First World War changed everything, causing the nations of the world to recognize the aircraft as a valuable tool in war. The demand for aircraft increased and pilots gained flying experience, generating interest in aviation for both military and civilian use. But it was too late for the CAC, which had dissolved in 1910. McCurdy moved on to fly for Curtiss's company, while Baldwin stayed by Bell’s side, running Bell’s laboratory at Beinn Bhreagh.

Best known as the inventor of the practical telephone, Alexander Graham Bell’s main research interest from the 1890s was aviation. He and his wife, Mabel, provided guidance and financial support to the young designers in the AEA and CAC. Bell also contributed crucial technical and scientific advice to his young team. For example, it was Bell who first suggested the use of ailerons after the Red Wing crashed. He also suggested they dope (or lacquer) the porous wings of the June Bug. After the Baddeck No. I crashed, he recommended changes that improved the flight characteristics of that aircraft, and he also contributed to the fine-tuning of Baddeck No. II. In effect, in doing what he did best — solve problems — Bell became one of the world's first aviation accident investigators, not only studying problems but also formulating solutions. His passion for flight, scientific and commercial experience, along with his mentorship, inspired aeronautical research and directly contributed to the further development of ailerons and other technological innovations, as well as the first powered flight in Canada, the establishment of the first Canadian aircraft company, and the first aircraft designed and built in Canada.

DID YOU KNOW?
After Lt. Selfridge was killed in 1908 during a demonstration flight piloted by Orville Wright, Alexander Graham Bell decreed that no one should carry passengers during test flights (this became known as “Bell’s Law”). However, it seems that this rule was ignored once in 1909, when Dolly MacKay MacLeod was a passenger during a test flight of the Baddeck No. II, piloted by Casey Baldwin. Although there is no documentary evidence of MacKay MacLeod’s flight, the story has been confirmed by family members and by the Baddeck community. It is therefore likely that she was the first woman to fly in the British Empire.