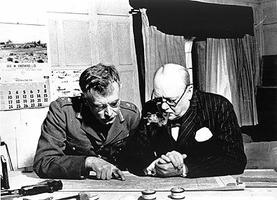 Andrew George Latta McNaughton, army officer, scientist, diplomat (b at Moosomin, NWT [Sask] 25 Feb 1887; d at Montebello, Qué 11 July 1966). He was trained as an engineer at McGill, enlisted in the nonpermanent militia in 1909 and took the 4th Battery of the Canadian Expeditionary Force overseas in 1914. His scientific approach to gunnery brought him rapid advancement; he was twice wounded and ended the war commanding the Canadian Corps artillery. He joined the permanent force in 1920 and became deputy chief of the general staff in 1922. As chief of the general staff, 1929-35, he began the mechanization of the permanent force and the modernization of the nonpermanent militia. From 1935 to 1939 he was president of the National Research Council of Canada.

McNaughton returned to soldiering in WWII as commander of the 1st Canadian Infantry Division in 1939. Senior Canadian officer in the UK while the force there grew to a corps (1940) and then an army (1942), he endeavoured to hold the Canadians together in one formation and deeply involved himself in the scientific aspects of soldiering. He initiated an improved method of airburst ranging and the development of "sabot" antitank ammunition. But his tactical judgement was weak - he endorsed the ill-fated Dieppe plan - and he never properly mastered the relationship between politics and high command in war. By late 1943, the crusty Canadian's uncompromising opposition to fragmentation of the Canadian Army Overseas was causing resentment in Ottawa; he was out of favour with his own minister of national defence, J.L. Ralston; and British criticism of his generalship was mounting. Under pressure and in declining health, he resigned in Dec 1943.

McNaughton remained a favourite of Prime Minister Mackenzie King (he had earlier been a confidant of Prime Minister R.B. Bennett), and was slated to become the first Canadian-born governor general. Instead he was lured briefly and unsuccessfully into politics; he served as minister of national defence 1944-45 but was unable to stave off conscription for overseas service or to win a seat in Parliament. A compelling public figure for almost 2 decades after 1945, McNaughton was Canadian representative on the UN Atomic Energy Commission, and president of the Atomic Energy Control Board of Canada, 1946-48; permanent delegate to the UN, 1948-49; chairman of the Canadian Section of the International Joint Commission, 1950-62, and of the Permanent Joint Board on Defence, 1950-59. He was a determined, independent-minded proponent of his view of the national interest, and in his last great campaign he bitterly opposed the Columbia River Treaty.