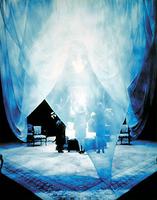 Astrid Dora Janson, scenographer (born at Cappel, Westphalia, Germany 9 June 1947). Astrid Janson has designed for theatre, television, opera and dance. She received a BA in Philosophy from Waterloo Lutheran University (1969) and an MA in Theatre Design from the University of British Columbia (1972), and began her professional career designing costumes for Toronto Dance Theatre, Global Village and Theatre Compact. Her artistic collaboration with Toronto Workshop Productions (TWP, 1974-82) led to such landmark designs as the Plexiglas cube for You Can't Get Here from There (1975) and a mock hockey rink for Les Canadiens (1977). For the Depression-era cabaret Ten Lost Years (1974), which toured Canada and Europe, Janson created costumes that were instantly recognizable by the audience and yet flexible in their use. Janson's sensitive readings and her ability to work collaboratively to realize a dramatic work characterize her approach to design.

Astrid Janson's work in the Tom Patterson Theatre (Stratford Festival) is particularly striking for its articulate and precise use of the 40-foot thrust stage, as exemplified in productions such as A Long Day's Journey Into Night (1994, 1995, 1998) and The Stillborn Lover (1998). The claustrophobia in Journey was accentuated by telescoping the sightlines towards a second-floor stairway framed by scrim walls and by tinting the design to the colour of dust. In the Avon Theatre Janson's design for Chekhov's The Seagull (2001) combined textures in the costumes with minimal set pieces to produce a striking theatrical environment. For Stratford, Janson has also designed The Sweet Bird of Youth (1996), Death of a Salesman (1997), The Cherry Orchard (1998), Richard III (1999), Harlem Duet (2006) and A Delicate Balance (2007).

Some of Janson's designs are remarkable as free-standing sculptures that interact with the lighting. Materials used include milk crates for Refugees (TWP, 1979) and wire mesh to create enormous screens for Passion (Canadian Stage, 1997). She has draped fabric in The Miracle Worker (Grand Theatre, 1994) and employed scrim walls for The Glass Menagerie (Tarragon, 1999) to create a diaphanous effect. On occasion the scenography has become an active performer, as in Molly Sweeney (Canadian Stage, 1998) in which the edges of the set curled imperceptibly during the performance. For the Wizard of Oz (Marlene Smith Productions, 1990) the costume worn by the chorus served as the set in certain scenes.

To convey the sense of hierarchy and of an institution teeming with life, Astrid Janson created a three-tiered set for Janacek's From the House of the Dead (Canadian Opera Company, 2008). For Who's Afraid of Virginnia Woolf (Soulpepper, 2009) she created a living room on a raked stage (higher at the end furthest from the audience), mirroring the protagonists' unbalanced relationship. For Doc (Soulpepper, 2010) Janson's design revolved around a large Plexiglas structure through which actors traverse the stage.

For dance, Janson has transformed the performers' bodies into sculptures in works such as Incognito (Desrosiers Dance Theatre, 1988) and The Firebird Suite (Royal Winnipeg Ballet, 1982). In 2004 Janson received a Gemini Award for production design for the dance film Shadow Pleasures. In 2008 she created sets and costumes for Theatre Augsburg's retelling of Alice in Wonderland.

Since 1993 Astrid Janson's virtuoso costumes for instalments of VideoCabaret have always been incisive parodies of Canadian cultural icons and ideally suited for the rapid-fire performance style. Janson created the costumes for all 11 instalments of playwright Michael Hollingsworth's acclaimed history series Village of the Small Huts.

Outside theatre, but intimately related to her work as a scenographer, Janson was also responsible for Reflections, an installation of Ontario history at Expo 86, and for the design of the Discovery Gallery at the Royal Ontario Museum (1998).

From 1993 until 2007 Astrid Janson was assistant professor in the theatre department at the University of Toronto. She has received many awards, including 13 Dora Awards, for her work. In 1980 she received a Toronto Drama Bench Award for her distinguished contribution to Canadian theatre, and in 2001 the Silver Ticket Award from the Toronto Alliance for the Performing Arts for her outstanding contribution to theatre in Toronto. She is a member of the Associated Designers of Canada.