If Atom Egoyan is hot stuff in the fire hall, perhaps it is official that he has finally made his mark in the mainstream. Not too many years ago, despite his popularity in Europe, Egoyan's name in North America was synonymous with cinema's art-house fringe.

This article was originally published in Maclean's Magazine on September 8, 1997

If Atom Egoyan is hot stuff in the fire hall, perhaps it is official that he has finally made his mark in the mainstream. Not too many years ago, despite his popularity in Europe, Egoyan's name in North America was synonymous with cinema's art-house fringe.This article was originally published in Maclean's Magazine on September 8, 1997 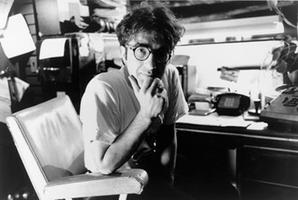 Inevitably, directors get tired of their own movies. And after finishing The Sweet Hereafter, Atom EGOYAN watched it so many times that by the time it premièred at the Cannes Film Festival last May, he no longer knew what to make of it. But last month - rested after vacationing in Italy with his wife, actress Arsinée Khanjian, and their four-year-old son, Arshile - the Canadian film-maker was ready to take a fresh look at The Sweet Hereafter. The occasion was a private screening in Toronto for the Directors Guild of Canada. Halfway through, the fire alarm went off. There was no fire, but the theatre was soon filled with firemen. "It was so bizarre," recalls Egoyan. "Usually firemen are all, like, 'Everybody leave the building now!' But they were so casual. They were thrilled because they'd read about the film. So I ended up doing a photo session with all these firemen. They all wanted pictures, and they gave me their cards."

If Atom Egoyan is hot stuff in the fire hall, perhaps it is official that he has finally made his mark in the mainstream. Not too many years ago, despite his popularity in Europe, Egoyan's name in North America was synonymous with cinema's art-house fringe. But Exotica (1994), his hermetic drama of schoolgirl striptease and adult bereavement, was a modest hit, grossing $15 million. Now, The Sweet Hereafter, Egoyan's seventh feature, takes his career to a new threshold. To the consternation of many critics, the film fell short of winning the Palme d'or, the top prize at Cannes, but it received more awards than any film in the festival: the second-place Grand Jury Prize, the International Critics Prize and the Ecumenical Jury Prize.

The Sweet Hereafter also marks a departure for Egoyan. Based on the 1991 novel by Russell Banks, it is his first script adapted from another source. And although the film's tone of acute existential paralysis is familiar from his previous work, for once its characters are ostensibly normal people. Filming in the B.C. interior, the 37-year-old director also left behind urban claustrophobia and took his camera into Canada's wilderness for the first time.

But shooting in the mountains "wasn't that shocking," says Egoyan, sipping an espresso in the kitchen of the converted house that serves as his production office in downtown Toronto. "I was raised on the West Coast, so natural beauty is part of me." (Born in Cairo to Armenian parents, he moved to Victoria at the age of 3.) "What makes this film such a huge step forward," he adds, "is that for the first time you can identify with the characters. You're not outside them. In all my other films, the characters have been fragments or aspects of my own personality. They were people looking for their own identity through rituals or gestures. But they were just shells."

Now he tells us.

So does this mean that all those naysayers who felt stymied by his films were right all along? No - Egoyan stands by his original work, but he felt he had reached an impasse. "After Exotica, I felt that everything I was writing I had dealt with somehow before," he says. "I was treading water. I have natural attractions to the grotesque and the absurd, and extreme and obsessional behavior, but I can almost predict that. I want to surprise myself, and surprise others." Adds the director: "I think my film-making is going to be split between projects I write myself, which will become smaller and more intimate, and these adaptations, which I really enjoy."

Egoyan's career, a kind of multimedia work in progress, extends beyond film. Giving Robert Lepage a run for his money as a directorial Renaissance man, he is writing a libretto for an opera titled Elsewhereless. He will direct Dr. Ox's Experiment, a new work by leading British composer Gavin Bryars, for the English National Opera in London next spring. In November, Egoyan is remounting his provocative version of the opera Salome with the Vancouver Opera. And he is currently polishing off his contribution to a six-part series of films about cellist Yo Yo Ma - a playful fiction in which Ma's limousine gets stuck in traffic on his way to a concert, and then he has to put up with a coughing fit in the audience.

The next movie project, meanwhile, is another literary adaptation. Backed by Mel Gibson's Icon Productions in Los Angeles, Egoyan is writing and directing a screen version of Felicia's Journey, based on the 1994 novel by Irish author William Trevor. Icon was involved in Egoyan's last brush with Hollywood - as the producer of Dead Sleep, a thriller that he was preparing to direct two years ago. After a quarrel with Warner Bros. over casting the female lead, Egoyan backed out, and Dead Sleep was dead in the water.

The director is more optimistic about Felicia's Journey. It would become his first non-Canadian movie, although he made an unsuccessful bid to transplant the setting to Canada. Trevor's novel, which won the Whitbread Prize, is about an Irish country girl who travels to England, pregnant and penniless, looking for the lover who left her. Instead, she falls in with a gentle, mild-mannered psychopath who tries to convince her to have an abortion so he can kill her with a clean conscience. The subject matter certainly seems Egoyanesque. But Egoyan suggested turning the woman into a Québécoise who travels to Victoria - a revision that was vetoed by the author.

Banks, meanwhile, seems delighted with Egoyan's treatment of The Sweet Hereafter, although the director shifted the setting from New England to British Columbia, re-ordered the narrative structure, added a car-wash scene at the opening, stripped the story of its demolition-derby climax, and embellished it with readings from The Pied Piper of Hamelin. "It's a brilliant film," Banks told Maclean's in Cannes. "He's disassembled my novel and reassembled it like a mosaic. And he doesn't judge any of the characters." The Pied Piper motif, Banks added, gives the story the quality of a fable, and he would have used it in the novel if it had occurred to him.

But perhaps Egoyan's boldest invention is his portrayal of the incest between the teenage Nicole (Sarah Polley) and her father, Sam (Tom McCamus). He films it in a candlelit barn as a gauzy romantic reverie, as if seen through the girl's confused eyes. "A lot of people will be quite shocked by it," says the director, "because they won't quite know what they're supposed to feel. But that's exactly what Nicole is experiencing." Then he adds: "I try to show things that haven't been shown before. And what we have never seen is that type of incest from the viewpoint of the person who's going through it."

The Sweet Hereafter, meanwhile, offers more natural performances than any of Egoyan's previous work. "These characters were fully formed," he says, "and I knew that the worst thing to do would be to stylize them." British stage veteran Ian Holm stars as the ambulance-chasing lawyer, Mitchell Stephens - replacing Donald Sutherland, who dropped out 10 days before cameras were set to roll last winter. But the cast is dominated by Canadian alumni of other Egoyan films: Bruce Greenwood, Gabrielle Rose, Maury Chaykin, Polley and Khanjian.

The director seems to inspire loyalty in actors. Aside from his affection for misanthropic themes, one of the quintessentially Canadian things about him is that he - like his older colleague David Cronenberg - is a notoriously nice guy. Polley says she has never worked with an easier director. "Even if he was a really bad film-maker," she suggests, "I think I'd still want to work with him."

Egoyan brings a mischievous sense of fun to the set. Actors appreciate his playful, almost childlike fascination with the creative process. But the director combines it with a clinical instinct for control - like the claims man in The Adjuster, the auditor in Exotica or the lawyer in his current film. There is a scene in The Sweet Hereafter where Stephens, the lawyer, tells the driver who crashed the school bus that she must learn to express her suffering for the sake of his lawsuit. When she finally does so, and is overtaken by grief, he rudely cuts her off: "And then what happened?" Egoyan can identify. "That's what a director does," he says. "We go to incredible lengths to seduce an actor to do something, only to disregard it if it doesn't work for us."

Egoyan, meanwhile, is gradually seducing his audience, like a Pied Piper of Canadian cinema. And where he is leading it is anybody's guess.