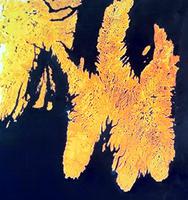 The Avalon Peninsula, Newfoundland's most populous region, thrusts out into the rich fishing grounds of the North Atlantic. St John's is visible in the upper right tip (courtesy Canada Centre for Remote Sensing).

The cape and adjacent Rock Island have been a protected sanctuary for seabirds in Newfoundland and Labrador since 1964 (photo by J.A. Kraulis/Masterfile).
PreviousNext

Avalon Peninsula, 9220 km2, is a spreading peninsula thrust out into the rich fishing grounds of the north Atlantic, forming the southeast corner of insular Newfoundland. The orientation of the land tends to be northeast, following folds in the peninsula's Precambrian, Cambrian and Ordovician structures. The Isthmus of Avalon, less than 5 km at its narrowest, joins the peninsula to the rest of the island. From Grates Point in the north to Cape Freels-Cape Pine in the south, the peninsula stretches 180 km and spans nearly 100 km east to west.

The peninsula is, and has been since the settling of the island, its most populous region. By the early 1800s it was home to more than three-quarters of the colony's population and today about one-half of Newfoundlanders live here, nearly three-quarters in the St John's metropolitan area.

The peninsula's rugged coastline was the earliest settled in the province and its 4 major bays, Trinity, Conception, St. Mary's and Placentia, were among the earliest fished. Newfoundland's first formal colony was begun at Cupids, Conception Bay, in 1610, followed by several other chartered "plantations" around the Avalon. Sir George Calvert was granted a portion of the peninsula 1623 and lived there 1627-29, with his headquarters at Ferryland on the "Southern Shore." It was his holding, called Avalon after the legendary site where Christianity was introduced to England, for which the peninsula was named.

During the 1600s and 1700s the peninsula saw conflicts between the French and English with France establishing Placentia on the southwest coast as its capital in the 1660s. Today, in addition to being the principal commercial and administrative region of the province, the peninsula is the location of many historic sites - including the national historic sites of Cape Spear and Signal Hill - 3 national historic parks, several provincial parks, a nature park near Salmonier, a spectacular seabird sanctuary at Cape St Mary's, 4 other ecological reserves and a 1070 km2 wilderness reserve in its southeast quadrant