The highlight of the banking hall is a pair of bronze doors elaborately decorated with highly stylized forms of local flora and fauna including beavers, snakes and birds (photo courtesy of Glenn McArthur).\r\n 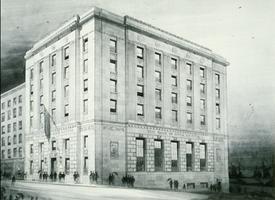 John M. Lyle's Bank of Nova Scotia, built in Halifax in 1930, represents the passing of an era. A shifting of popular taste toward modernism, coupled with the severe economic conditions of the Depression, meant that this was to be Lyle's last design in the classical style, employing artisans for a traditional, handcrafted and elaborate sculptural and decorative program.

The Bank of Nova Scotia is located on Hollis Street across from Halifax's most iconic structure, Province House. Extremely sensitive to the location, Lyle felt it was important to echo some of the latter building's classical features. As a result, the bank has all the earmarks of classical design, with a base, cornice, corner and edge treatments and articulated forms. The design program called for a banking hall and 4 stories of rental office space above. The main entrance is framed with carvings of stylized local fruits and flowers, and the bank's crest is surmounted over the bronze door. The Hollis Street facade has a slightly projecting three-bay frontispiece with rusticated masonry supporting fluted pediments that rise 4 stories to support the cornice. The cornice frieze is simply decorated with medallions of old French, English, Canadian and Nova Scotian coins.

The sculptural program was an example of Lyle's regional decorative phase (see the Runnymede Library in Toronto) and included 3 themes important to the maritime communities: their history, economy and natural habitat. According to Lyle, 86 different motifs were incorporated in the program, "from the small trailing arbutus - the floral emblem of Nova Scotia - to the sunflower, and from the seagull to the Canadian goose, the bear, the silver fox, the codfish and crab... In every case, we studied forms, translating them into conventionalized ornament for wood, stone, plaster, bronze or iron. The ornament on the exterior stonework was treated in the modern manner, quite flat with softened arises with occasional crisp, sharp notes as accents. The effect of this treatment in the wall is to make the ornament plastic in character and married to the wall surface without undue play of light and shade."

The floor of the banking-hall entrance features a large, metal, circular coat of arms, while a colourful mosaic plaque above the door depicts the arrival in Halifax of the Cunard steamship Britannia on her maiden transatlantic voyage. The ten-metre-high ceiling of the banking hall is divided by a series of beams that span the room, and the plasterwork in the intervening spaces is decorated by 5 flat-sided octagons, each side depicting a Canadian bird or animal. The highlight of the banking hall is a pair of bronze doors that are elaborately decorated with highly stylized forms of local flora and fauna including beavers, snakes and birds.

Having weathered the demands of the Bank of Nova Scotia's expanding services with few changes or additions to Lyle's original design, the building is actively used as its corporation head office, its east coast regional office, and its main Halifax branch. It continues to be a source of pride both to the Bank of Nova Scotia and to the city of Halifax.