The Eaton Centre, Toronto (designed by the Zeidler Partnership and Bregman and Hamann, phase 1 opening in 1977, phase 2 in 1979) is the epitome of those vast multistorey interior "atrium" spaces for which Canadian architecture became known internationally in the 1970s. The centre comprises The T. Eaton Co. Ltd. department store, 3 office towers (opened in 1979, 1981 and 1991) and a 274 m glass-covered shopping galleria flanked by 3 levels of shops and restaurants and 4 levels of parking. The architecture plays with the simple technological themes of traditional modern design, unadorned concrete and steel structure, metal pipe handrails, transparent and mirror glass, together with the decoration provided by plants and fountains, shop signs and banners, creating a lively and varied gathering place that is well integrated with the existing downtown.

Major alterations begun in 1998 extend the Yonge Street face east to create additional retail space and a more welcoming aspect. In addition, the central court is extended to the south-west, with the loss of the John B. Parkin- designed Salvation Army headquarters building, which had occupied the site. 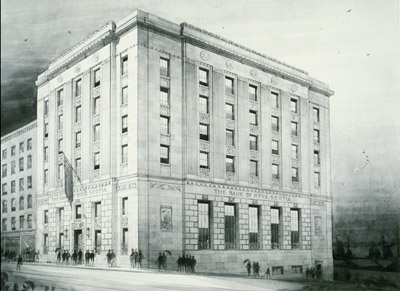