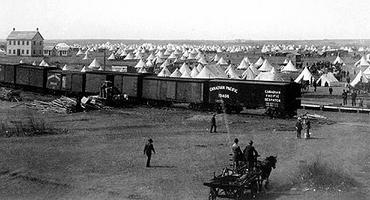 In 1902 the Reverend Isaac Barr secured a huge land tract between the present-day Alberta-Saskatchewan border and Maidstone (Saskatchewan). In March 1903 he brought approximately 2000 colonists from England. Arriving April 17 in Saskatoon, they spent 2 weeks bickering and reorganizing before embarking on an easy 270 km wagon trip to the colony. Many discontents left to form their own communities. Tired of continual criticism, Barr resigned, went to Toronto to sort out his money problems, and moved to the US and eventually Australia.

Leadership passed to his rival, the Reverend George Lloyd, after whom the colony's first town was named Lloydminster in July 1903. Despite initial setbacks, the Barr colonists opened up the vast area west of Saskatoon. In 1905, the provinces of Alberta and Saskatchewan were created (see Autonomy Bills), and the interprovincial boundary passed through Lloydminster.

Although the Canadian Northern Railway, which arrived that year, placed its station on the less populated Alberta side, the colonists continued to develop the Saskatchewan side. Not until the 1970s oil boom, however, did the western portion match the eastern side.